In 1984, General Gustavo Alvarez Martinez of Honduras, a long-time U.S. ally and 1976 School of the Americas graduate, was exiled to Florida at the end of a barrel. 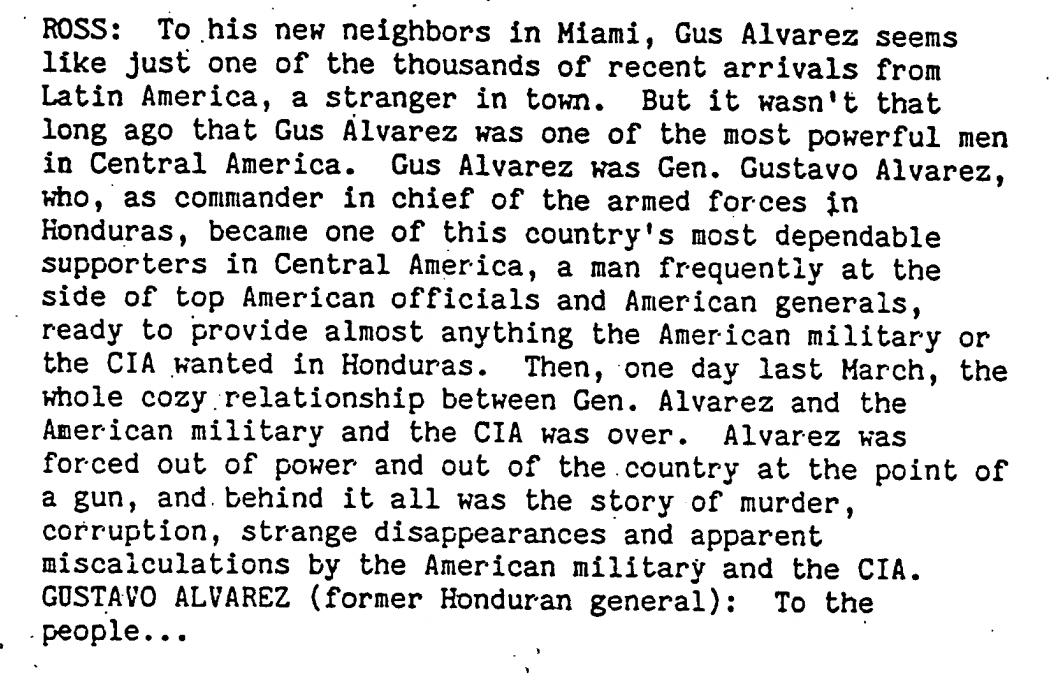 In an interview with NBC’s Brian Ross, Alvarez bitterly recounted that he did not receive any help from his friends at the U.S. Embassy. All that was given to him was a letter through the wife of the U.S. Ambassador’s wife at the time that it would be “best” if the family not stay in the country.

A few years earlier, during the 1981 Honduran elections, President Ronald Reagan’s U.S. Ambassador to the United Nations, Vernon Walters made the claim that a “friendly” Honduras will mean and end to the influence of their Communist neighbors in Cuba and Nicaragua.

From that moment on, the Reagan Administration and its allies attempted to keep the CIA and its efforts in the dark, concealed from the rest of the world.

In December of 1982, when asked by reporters from The New York Times if there were 150 CIA agents engrossed in paramilitary operations in Honduras, Reagan denied the claims.

In reality, the Agency was turning a blind eye towards the killings of several Hondurans in an attempt to stop arms trade deals in El Salvador coming from Nicaragua in a process that was considered “highly selective.”

Towards the end of Reagan’s term, the Soviet Union was on the break of collapse, and with it, the threat of global Communism. Reagan ordered 3,000 U.S. troops to Honduras in 1988 to support the efforts of the Contras in Nicaragua, but they were withdrawn a year later in part due to “heightened regional instability.”

In the decades that followed, Honduras’ strategic important to the U.S. continued to diminish, and the country ended up as an all “left in the cold.” However, the killings continued - from 1990-1998, 701 people were reportedly murdered by “death squads,” and Alvarez himself was assassinated by a left wing group in 1989 as an act of retaliation. At the CIA, outside pressure led to internal investigations were opened into the Agency’s role in the “alleged human rights abuses” …

Which culminated in a 200+ page report in 1997 that remains heavily redacted.

While the U.S. role in creating the current “regional instability” is undeniable, the report’s excisions points to how much remains secret, and probably will remain secret, for the years to come.