Legislative bodies in four states have made themselves exempt to public record laws. Despite their role in literally enacting those laws, they are not held to the same standard of transparency as the rest of the governmental bodies in those states. 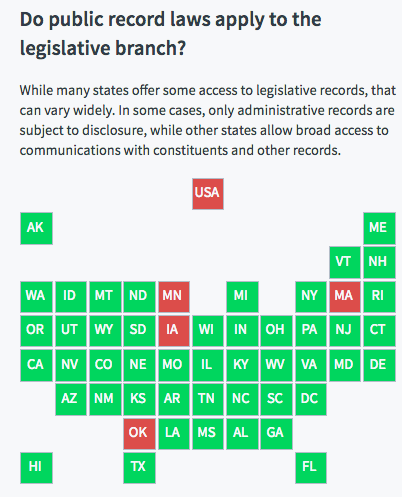 For years, the Legislature in Iowa, Massachusetts, Minnesota, and Oklahoma have all barred their records from the public causing points of contention amongst open government advocates, journalists, and constituents seeking more information about their lawmaker’s day-to-day doings.

Defenders of this policy argue that these states are simply following the standard set by federal FOIA law, which does exempt Congress. Nonetheless, several efforts have been underway to override legislative exemptions written into law in those states. In Massachusetts, PioneerLegal, the Pioneer Institute’s public-interest law initiatitive, reviewed the state’s constitution and found that the legislative exemptions from public records law and open meetings law are unconstituional. In their ten page letter to the Special Legislative Commission on Public Records of Massachusetts, the group layouts their argument and emphasizes the need to hold the legislature accountable.

“In our state’s constitution, it says that the Legislature should be “at all times accountable to” the people,” said Director of Government Transparency at the Pioneer Institute, Mary Connaughton. “How can they be accountable if they are hiding behind closed doors or shielding their records from the people?”

Among the groups arguments, the letter notes two practical issues that are frequent points of contention when it comes to legislative transparency. According to their letter, lawmakers are concerned in protecting constituent information and ensuring a smooth lawmaking process.

“In their eyes protecting the public from private citizen information from getting out there is important,” said Moore. “If they are worried about constituency information, then the exemption would also have to apply to the governor’s office or another office.”

Transparency has been a long-time topic of discussion in Massachusetts. Back in 2016, lawmakers updated the Massachusetts public records law and as a result, created the Special Legislative Commission on Public Records. The Commission is charged with looking at the possibilities of making the governor’s office, the Legislature, and the judiciary subject to the public records law. The Commission is currently in conversations with transparency groups and other lawmakers and is set to report back in December with solutions to increase transparency in the state.

“It’s fundamental in a healthy system of government for the legislature and for the governor’s office and for the administrative aspects of the judiciary to be subject to public records law,” added Connaughton.

In Minnesota, Senator Carolyn Laine (D-Columbia Heights) understands legislative concerns. However, she believes the consolidation of power is the problem when it comes to transparency within the Legislature.

“The thought has been that legislators require some privacy from some open meeting laws in order to talk openly and freely behind the scenes and hence, work together to negotiate solutions. Today, I don’t see that happening. Today, it’s only about power, and power doesn’t negotiate well,” said Laine via email to MuckRock.

Laine has been a Legislative member since 2007. She says that sometimes members don’t have the opportunity to fully vet bills that are introduced for a full-vote. She believes that transparency is important for the constituency, but also important for other members to know what’s going on ahead of time.

“Requiring by statute that all bills have 24 hours to be seen by all members and the public before being voted on, would be a game-changer,” said Laine. “A bill can be finished behind closed doors, brought to the floor, the rules suspended, and an immediate vote required, before there is time to assess what is in the final bill.”

Minnesota lawmakers have rallied for change as the exemption has been upheld in their state for over 40 years. Multiple attempts have been made to put an end to the lack of transparency. Last year, Representative Paul Thissen introduced a bill that would have required the legislature to be more transparent. The bill didn’t move forward, but it is one of the few attempts in the state to overturn the years long law.

As for Iowa, not much has changed since the enactment of its public records laws in 1967. According to the Iowa of Freedom of Information Council, there hasn’t been any bills introduced in the state to remove their Legislature from the decades long exemption to the public records law. In addition, more than 50 exemptions reign in Iowa, with a majority of them making government records difficult to obtain.

In Oklahoma, a bill was introduced in 2011 by Representative Jason Murphey (R-Guthrie). House Bill 1085 would have added the legislature to the definition of public body under open records and open meetings laws in the state and ended the long time exemption to the Okalahoma Legislature. The bill died in committee and didn’t make it to the full house for a vote. In 2017, another attempt was made by Senator David Holt as he introduced SB 352., but again, the bill failed to pass.

Many attempts have been made at the forefront to eliminate long-standing legislative exemptions in these states. Yet, bills keep dying and solutions keep getting tabled for future discussions. So, who’s to blame? A professor at Oklahoma State University believes we’re the problem.

“We need to do a better job at explaining to the public that your legislature is exempted, and we need to elect people who would be willing to operate in the open,” said OSU Associate Professor at the School of Media and Strategic Communications Joey Senat.

However, about 85% of Oklahoma voters agree this lack of transparency is an issue and would support a bill that would make their Legislature comply with open records law.

Although there is bipartisan consensus recognizing that keeping the Legislature exempt from the public records law is a bad idea, not much has changed to override that. A fear for privacy and stagnant lawmaking may keep lawmakers from making their records public in the future.

“Good people are in elected office now,” said Laine. “But, they need the unified demand of the electorate to carry forth the things those elected officials already know are needed but cannot effect without a cultural demand.”