Earlier this week, we wrote about Brett Kavanaugh’s renewed Federal Bureau of Investigation background check and predicted that while the full investigation wouldn’t be public for years, likely some summary would be released. In light of reporting that the results of the background check will only be available to the Senate, we wanted to address one of the lesser-known aspects of the Freedom of Information Act: the broad exemption of the Legislature.

Similar to the White House, the entire Legislative Branch of the federal government is exempt from FOIA. Unlike the White House, there is no equivalent law for Congressional records (such as the Presidential Records Act). Likewise, while certain entities within the White House are considered subject, Congress maintains a blanket exemption of all associated entities, including the Capitol Police.

All that said, up until quite recently, it was still possible to get access to Congressional records through communications with non-exempt federal agencies. Back in 2013, MuckRock’s Michael Morisy put out a large series of requests for agency responses to Congressional committees, and in 2015 Alex Richardson wrote an article on tax fraud investigations prompted by former Senator Carl Levin, sourced from a FOIA request to the Internal Revenue Service by Todd Feathers.

But just this last year, Congress added language to outgoing communications with federal agencies, which expand the blanket FOIA exemption to those and associated records.

It remains to be seen how that argument will hold up in a FOIA lawsuit. The existing case law is less than promising.

All of this brings us to the question of why the Legislature maintains its exemption. Even during the debate surrounding the efforts to reform FOIA in 2016, the idea of un-exempting Congress was never seriously discussed. In fact, one of the few one of the few attempts to actually answer the question on the record dates back to 1992, and was in response to report entitled “Application of the Freedom of Information Act to Congress: A Legal Analysis,” and which dismissed criticism of the exemption in a single sentence.

For our part, we’d like to remind Congress that at the state level, 46 out of the 50 state public laws apply to the legislature … 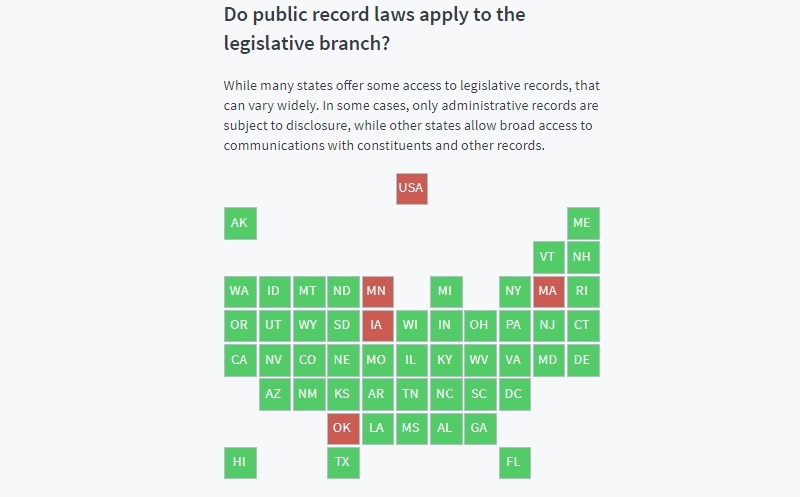 and that to the best of our knowledge, those states still manage to pass laws.