Know Which Administrations Are Exempt

The Presidential Records Act only applies to administrations from Reagan onward, and after those presidents have been out of office for five years. George W. Bush’s records have only become FOIA-able as of last January, and Obama’s will be available in January of 2022.

Administrations prior to Reagan are technically exempt (their records considered private property of the president themselves), but it also depends on the nature of the request - the John F. Kennedy Presidential Library rejected a request for records on Papua New Guinea, but provided FOIA logs for 2013:

Jason Smathers wrote on the intricacies of the act after the exemptions on the Bush records were lifted, so be sure to give that a read as well.

Be Narrow or Be Patient

On top of those special circumstances for processing outlined by Smathers, Presidential Libraries typically have small and overworked archival staff. So unless you can be especially exact about what you’re looking for, get ready for a long wait. Robert Delaware’s request for the George W. Bush Presidential Library’s files on Lance Armstrong, for example, comes with a wait time of twelve years - four years longer than Bush was president.

Since material only has to be processed once to be released, one way around the long wait times is to ask for records that archivists are already working on. This is where FOIA logs come in handy - find out what research is being done, and piggyback off that.

Jason Smathers filed for all the FY2013 FOIA logs from the Presidential Libraries susceptible under FOIA. Find out if anybody’s started something you’re interested in, and then file away!

So with that, we have one last question for you … 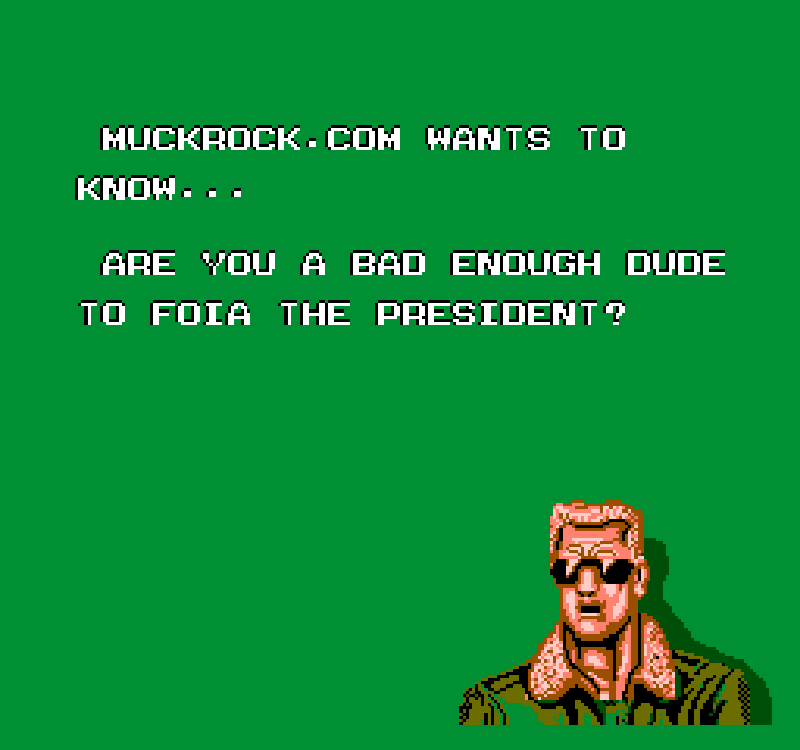 Image - and ROM hack! - thanks to Andrew Qu of the Bay State Examiner

Jason Smathers sent this request to the John F. Kennedy Presidential Library & Museum of the United States of America

Jason Smathers sent this request to the William J. Clinton Presidential Library of the United States of America