One thing we get asked about a lot is if it’s possible to FOIA for XYZ thing that President Donald J. Trump was reported to have done or said. In the overwhelming majority of cases, the answer is no, for reasons we’ll outline today.

The shortest answer is that presidential records (yes, that includes the tweets) fall under their own law: the Presidential Records Act, which we explain in detail here. Those records are blanket exempted until five years after the POTUS leaves office, which means we’re looking at 2025 at the earliest as far as Trump is concerned. (Though for the sake of argument, it would be interesting to see how that five year timeline would or would not be impacted by impeachment.)

So, does this mean that all White House records are exempt? Not quite. There are offices within the White House that do fall under FOIA …

Those each have fairly specific functions and won’t be much help if you’re, say, trying to get a hold of Trump’s golf scores.

Today I filed a #FOIA request from the Office of the President for the scorecards from @realDonaldTrump’s golf rounds as @POTUS.

Show us the scorecards. pic.twitter.com/wVL6osjwWN

(Not trying to pick on this particular person; their tweet just happened to show up in the #FOIA timeline as of writing.)

Which is why we discourage people from filing with the White House. We actually pushed a feature that’ll bring up an error message if you try, just to save you the request. 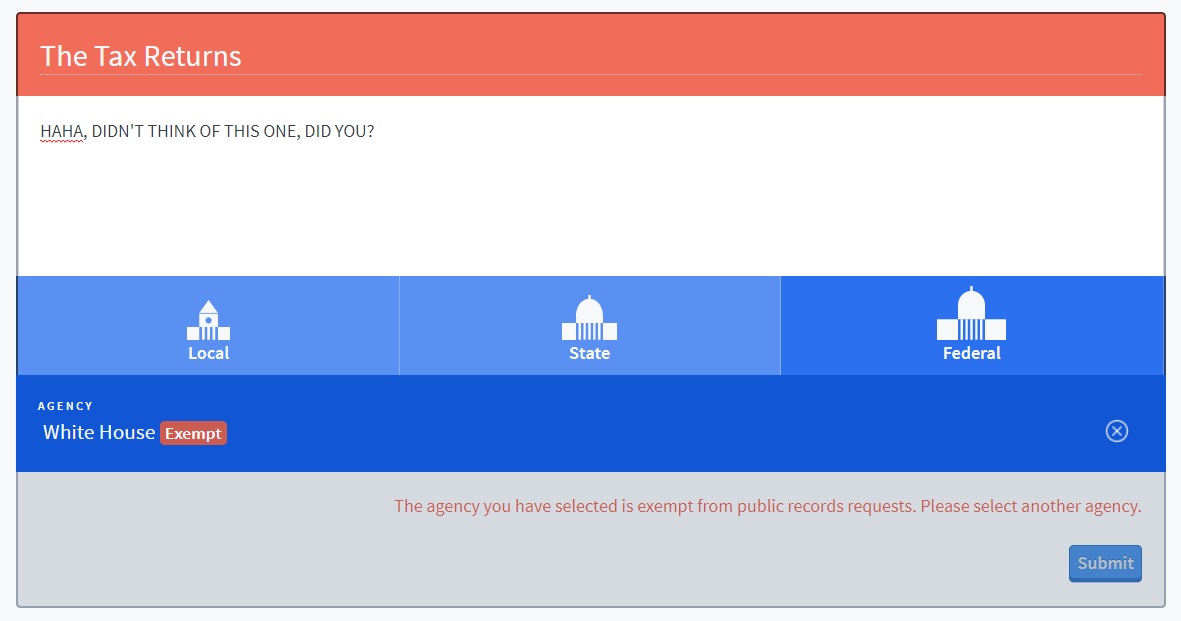 Then there are things like the White House visitor logs, which are a bit trickier.

Technically, those are Secret Service records, and the Secret Service is subject to FOIA. The USSS didn’t agree with the assessment, however, which lead to a series of lawsuits, settlements, and appeals that ultimately ended with would-be Justice Merrick Garland determining that the logs fell under the President’s “constitutional right to confidential communications.”.

Now, our friends over at Property of the People did sue to get access restored to those logs, and they won …

We sued to get White House visitor logs. Working in collaboration w/ @ProPublica, these logs are now online as a searchable database. Enjoy! #FOIA https://t.co/vZlh4fVP3N

but the logs released were from those sub-offices mentioned earlier that were already subject to FOIA. So alas, you’re not gonna track down secret meeting with the Reptilians that way.

So does this mean you should just give up? Not at all. There’s a reason why we call it the FOIA the Trump Administration project, rather than the FOIA Donald Trump personally project. (Which you can still do for his records prior to becoming POTUS, by the way.)

Visitor logs aside, most communications between Trump’s office and federal agencies aren’t exempt, which is how Vanessa Nason was able to find his personal involvement in the hunt for the National Parks Service’s rogue tweeter. Frank Matt has been compiling tips and strategies to find out what records are being created by the President’s words and deeds, pulling from some of the great investigative work being done today to provide oversight for the administration. Even Beryl Lipton’s years-long project on the growing privatization of the prison industry have taken on a new significance in light of the Trump administration’s reliance on privately-operated immigration detention centers.

So keep those FOIAs flying. You just might need to be a little indirect, and lot creative.

Trump just said news anchors sent him letters declaring his meeting yesterday to be the greatest they have ever seen. EVERY anchor must state whether they engaged in this unethical puffery or if Trump is lying. FOIA request for the letters going out immediately.