In late December 1977, Sir Charles Spencer Chaplin, known to the world as “Charlie,” died in his home in Switzerland. A few months later, his body was stolen from its cemetery plot, kicking off an international corpse hunt that briefly - if dubiously - included the Federal Bureau of Investigation.

Chaplin’s sprawling FBI file attests to the fact that the actor’s lefty politics had gotten him on the Bureau’s bad side. The FBI played a role in barring him from re-entering the country in 1952. But that was a long time ago, and besides, J. Edgar Hoover was dead. When the Bureau’s Boston Field Office received a tip from a source in Portland, Maine, they were quick to share it with the Swiss authorities …

though the quality of the tip was debatable.

A few days after the graverobbing, agents in Portland received a call from a “respectable businessman” who had been in contact with a local psychic. That psychic claimed to know who had stolen Chaplin’s corpse (two men and one woman), where they had taken it (Düren, Germany), and why (hatred of Americans). She also explicitly stated that no ransom would be demanded. 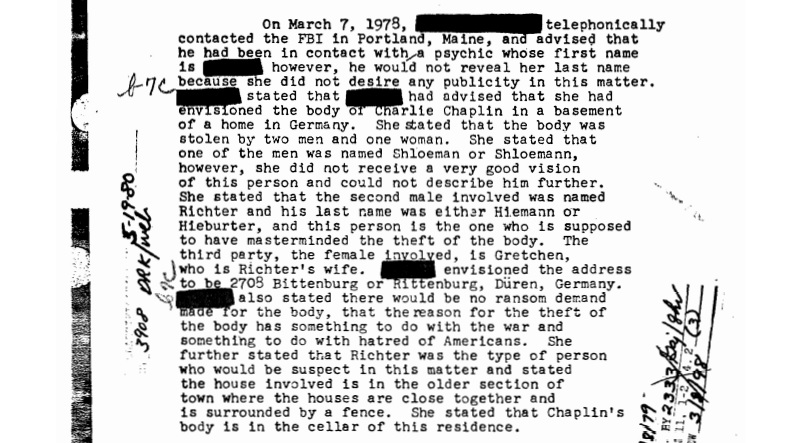 When passing this information on to then-FBI Director William Webster, the Boston Field office did take care to note that the source had vouched that the psychic was “one of the strongest in the area.”

Webster passed the information on to Bonn. While the file doesn’t note how they took it, we do know that a few weeks later the actual culprits - who were, in fact, two men, albeit sans a woman, still in Switzerland, and motivated purely by money - demanded a ransom. That key part of the tip almost immediately disproved, the FBI’s Airtel likely ended up in the pile of other dubious leads, such as the suggestion that Nazi’s stole the body as posthumous payback for Chaplin spoofing Adolf Hitler in “The Great Dictator.”

This was not the first, and hardly the last, time that a psychic tip turned out to be some pretty dicey intel.

Read the full incident embedded below, and rest of the file on the request page.

Image from publicity photo from Charlie Chaplin’s The Kid, in public domain via Wikimedia Commons