In today’s digital era, streamlining public records request should be a breeze. Yet, states like Kentucky are still imposing laws that favor requesters who send in their request the old-fashioned way.

With a three-day response time, a streamlined appeals process through the Attorney General’s office, and only 13 exemptions in the law, requesters in Kentucky should have an easy time getting records. But if you take a closer look at the Kentucky Open Records Act, you’ll find KRS 61.872(2), which gives agencies the discretion to refuse KORA requests sent via email.

Just last year, state AG Andy Beshear ruled that email is not a statutorily recognized method of submitting a request. The appeal that led to that decision, 17-ORD-201, was submitted by Jordan Harrod who was requesting hired dates, pay amounts, and pay increases for six named current and former employees in the Office of the Oldham County Judge-Executive. 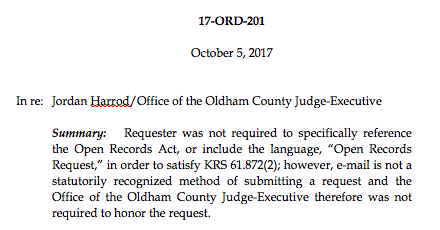 Despite the fact that the agency responded within three working days to the original request and never raised any objections to the method of the requester’s submission, the AG ruled that in the future, the agency should notify the requester that it does not accept emailed requests.

Kentucky isn’t the only state with grey areas in their records request. Earlier this month, Ohio revised its outdated law, which stated that statutory damages could not be won in court unless the original records request was hand delivered or sent via certified mail. The revision now includes electronic submissions as a standard to win statutory damages.

“When the statute was written, there was no such thing as emails, so we didn’t put in there,” said First Amendment lawyer Jon Fleischaker, who helped write KORA. “We have legislative concerns that if we fooled with the law, the Legislature could take the opportunity to enact adverse action to access to records. But, I would say that about 80 - 90% of agencies will take an email.”

Image via Eielson Air Force Base