Before this month, if you won your public records lawsuit in Ohio you would get your records, but not necessarily win any attorney fees or statutory damages. Now, a new revision to the law overrules the outdated provision.

Hidden deep within the old Ohio Revised Code, section 149.43(C)(2) said that only a written request that was “hand delivered or sent via certified mail to inspect or receive copies of any public record” entitled the requester to recover statutory damages in court.

Now, the new Ohio Revised Code, which took effect November 2nd of this year, includes electronic submissions as part of the requirement to win those damages.

It should be noted that the new revisions only apply to statutory damages, which set a strong precedent for future Ohioans looking to gain compensation for any damages in court. Statutory damages are penalty provisions of the law and are awarded when the court finds that open records laws were violated.

“We became aware of the problem after a couple Ohio supreme court decisions precluded a winning records requester from getting damages because of the outdated provision in the law,” said President of the Ohio Coalition for Open Government and Ohio News Media Association, Dennis Hetzel.

At the end of the day, records laws in the state come from interpretation of the Ohio Sunshine Laws by the courts and local jurisdictions legal counsel. The new revised code comes after Ohio Attorney General Mike DeWine’s publishment of the Sunshine Law Manuel, an annual guide that helps answer questions about the state’s open government laws. Yet, Hetzel says the changes aren’t as strong as they could be.

“The general proposition is very different in Ohio to get fees and attorney fees. Even the damages provisions are weak.” said Hetzel.

Prior to the revised code, Data Trace Information Services found themselves losing their statutory damages in court over the previously hidden technicality.

“If I am in an open records case I don’t want money, I want records. But, the cost will still be thousands of dollars for it,” added Hetzel. “If you know it’s going to cost money, then the battle is only for those with deep pockets.”

Now, those who were aware of the old provision made sure to abide by it prior to entering into a lawsuit with an agency. Such was the case with Sage Information Services President, Roger Hurlbert, who sued Columbiana County Recorder, Theresa Bosel, in 2013. The lawsuit favored Sage Information Services and the County ended up releasing the documents and paying for Rogers fees, after he submitted proof of his request being sent via certified mail. 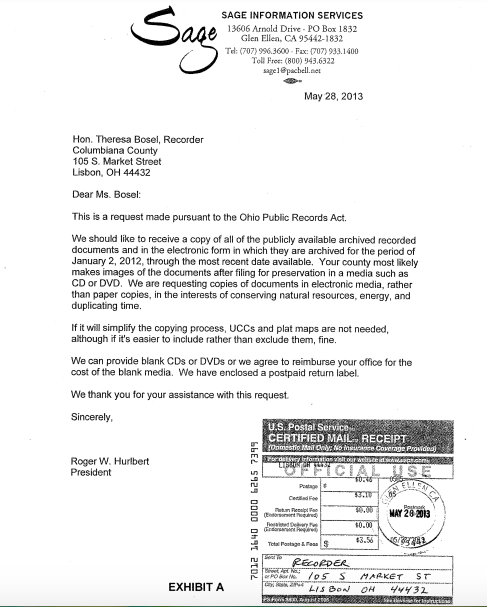 With the new changes in effect, requesters won’t find themselves trapped in a technicality for not submitting their records request in the proper format. But Dan Tierney, spokesperson for the Ohio Attorney General’s Office, says that the new code won’t apply to current lawsuits with records request submitted prior to November 2nd.

“Statutory damages are paid to the complainant complaining under statute,” said Tierny. “The law provides that the entity found in violation of the statute also compensate the attorney and the complainant, making sure the attorney fees are covered. But, the law makes it clear that it’s up to the courts to decide.”

The new Ohio Revised Codes are now in effect. For more information about public records procedures, costs, or complaints, visit the Ohio Court of Claims.