New York City has battled it out among the other 19 finalist cities for #AmazonHQ2, with Governor Andrew Cuomo telling WCBS 880 this month that he’s done “everything he can” to win.

“I think we put together a tremendous proposal, we have a great incentive package,” Cuomo told WCBS. “Anything else I can think of that’ll get us over the top, anything they want named Amazon – I’ll change my name to Amazon Cuomo if that’s what it takes.”

The Wall Street Journal recently reported that Amazon plans to split HQ2 evenly between two cities and is in late-stage discussions with NYC, as well as Dallas, Texas and Crystal City, Virginia. None of these three cities have made their proposals publicly available. Various agencies in Northern Virginia and Dallas cited exemptions stating the documents’ release would harm their competitive advantage.

New York agencies have used this excuse, too - the Empire State Development Corporation denied MuckRock’s request for the New York proposal in October 2o17 on the grounds that its release would “impair present or imminent contract awards.” The New York City Economic Development Corporation used the same language when it rejected MuckRock’s request Nov. 2.

New York agencies have also simply failed to respond to requests, or extended their time frames to respond by months.

For example, MuckRock first filed a public records request with the Office of the Mayor of New York City on October 31st, 2017. After more than a week had passed, the office said it would have a response by February 9th of the following year. In February, the agency asked for an extension, a response estimated in early June.

In June, the agency again extended its time to respond, this time alerting MuckRock we should expect a response on December 7th, 2018 - more than 13 months after the request was initially submitted and close to - if not beyond - Amazon’s self-imposed deadline for making the HQ2 announcement.

When MuckRock filed a second request with the mayor’s office October 1st of this year, the agency estimated it wouldn’t have a response until April 12th, 2019.

A September 2017 press release from the New York City Economic Development Corporation reported that the mayor, deputy mayor, and the nonprofit corporation itself received more than two dozen proposals of private sites for Amazon’s second headquarters to complement some publicly owned property. This means that the mayor’s office was certainly involved in the process and almost certainly has related records.

The City Clerk’s office, on the other hand, hasn’t yet acknowledged an October 1st request for the bid.

New York City submitted its HQ2 proposal in partnership with the state Oct. 18, 2017, the Economic Development Corporation announced at the time. It also released a nonspecific letter of support from the mayor and a 20-page overview of the proposal that includes the bid’s key messages, the proposed sites, and a list of industry groups and academics who submitted letters of support. 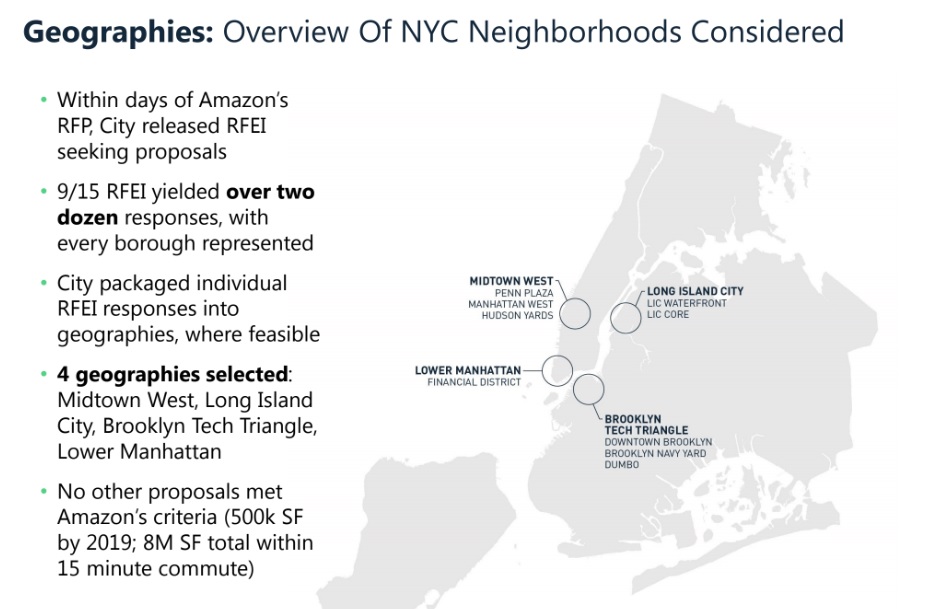 Greater NYC has the largest tech workforce in the nation with 296,000 workers, according to the Economic Development Corporation’s post, offering Amazon a necessary labor force to fill the 50,000 jobs it says its second headquarters will create (or 25,000 if the company establishes multiple secondary headquarters).. The city also has 105 institutions of higher learning and more than 2.3 million residents with a bachelor’s degree or higher.

The New York Times reported in October 2017 that New York City is not offering Amazon tax incentives beyond those available to other companies.

“We see this as a competition for 50,000 new job openings - jobs we want New Yorkers to land,” Mayor Bill de Blasio told the New York Times.. “We win it based on the talent of our workers and the incredible diversity of industries in this town. Those are the strengths you can’t buy with tax breaks.”

Without public bid documents, New York’s offerings in alignment to other RFP points are unclear to the public and to residents, who would see the biggest impact from HQ2.

If you have any unique ideas about documents to request that could shed light on the proposal’s redacted materials or how the proposal was conceived, submit a request through our service or send us ideas via email, on Twitter, or on Facebook.

Image by Diliff via Wikimedia Commons and is licensed under CC BY-SA 3.0

Paxtyn Merten sent this request to the Office of the Mayor of New York City, NY

Adanya Lustig sent this request to the Office of the Mayor of New York City, NY