According to the file, the liaison was created with the group (which itself had raised concern as a possible source for domestic terrorism threats) to help deter acts of homegrown violent extremism. The Bureau’s purpose, however, wasn’t to prevent the group from committing extremist acts or to prevent them from encouraging others to; it was to protect ACT from unknown and unspecified hypothetical threats.

ACT For America is designated by the Souther Poverty Law Center as a hate group.

ACT For America is known for their connections to senior government officials such as former Central Intelligence Agency Director and current Secretary of State Pompeo. The group is also known for stoking fears of Muslims, pushing Sharia law conspiracy theories, and promoting anti-Muslim legislation. These facts were not only known to the FBI, they were cited in the earliest documents in the recently released file.

One of the FBI’s earliest known dealings with ACT For America was in January of 2015, when the Bureau planned to send an FBI representative to a February event called “Domestic Jihad & ISIS”, hosted by St. Mary’s University’s Center for Terrorism Law in San Antonio. The Bureau’s representative was apparently to present a “keynote address” at the event, which also would have featured former FBI agent John Guandolo. In response to public pressure, the FBI pulled out of the event. A new FOIA request has been filed to learn more.

Guandolo is considered to be a conspiracy theorist with a shaky record at the Bureau as a result of him having a sexual relationship with a key witness in a Congress member’s corruption trial. Guandolo would later appear as a guest speaker at another ACT event.

The FBI was aware of Guandolo’s controversial stances and his public fall from grace with the Bureau, though seemingly not because of its own records on the matter. Rather than consult its own files, the FBI performed “open source queries.” The file does not indicate that any additional inquiries or research were performed when the Bureau’s analyst learned that Guandolo had been “dismissed from the FBI for [un]ethical and bizarre conduct.”

When Guandolo’s conspiracy theories and rhetoric have resulted in events involving him being canceled or in public pushback, Guandolo has blamed the actions of “HAMAS and Muslim Brotherhood supporters.” 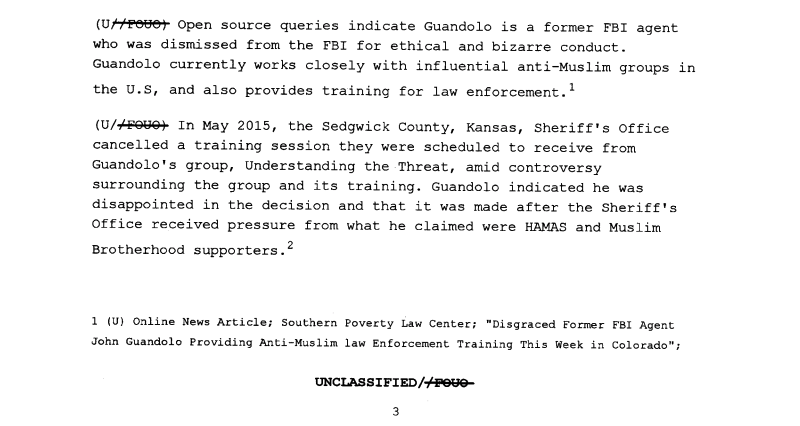 The FBI’s liaison with ACT For America seems to have begun on May 29th, 2015 when an FBI official made contact with ACT For America “as part of an outreach … to help prepare for and assess any potential threats surrounding any events the group planned to host.” The unredacted language of the Bureau’s file seems to imply that the Bureau established contact, stating that “writer contacted … ACT! For America.” Asked to comment, Lisa Ritchie, formerly of ACT For America, said that she reached out to the FBI.

Although Ritchie’s name and email address are redacted in the FBI’s release, her information is included on several postings by ACT’s guest speakers for events referred to in the FBI’s file, and her information was included in leaked emails. Ritchie is closely tied to the Republican party, acting as the Treasurer for Kenya Cox, the 2012 Republican nominee for Kansas State Senate, District 29. The email address Ritchie used for ACT For America and communications with the FBI was listed as both hers and Cox’s in the original Campaign Finance Appointment of Treasurer Report. 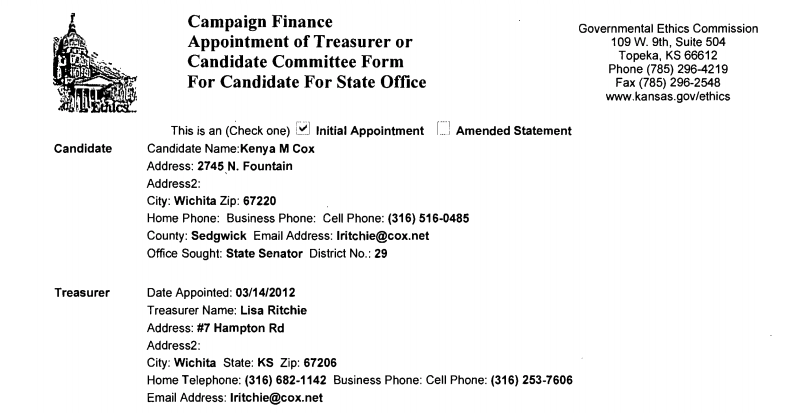 Prior to Ritchie’s contacting the Bureau, the only two appearances of ACT For America appearing in the FBI’s release is from 2013 when the an interfaith group shared concerns around odd behavior by the group’s members. A 2012 entry from file also refers to a handful of emails that a group had received from ACT For America.

Later in the file, the FBI documents the fact that ACT For America’s Wichita chapter had ties to the Republican party beyond Ritchie. According to the Bureau, the group’s planned guest speakers included Peggy Mast, a Republican who was then a member of the Kansas House of Representatives and the House Speaker Pro Tem. She is known for calling Hitler’s words “profound.”

The file goes on to state that Todd Starnes, a Fox News Radio host, was also a planned speaker for ACT For America. 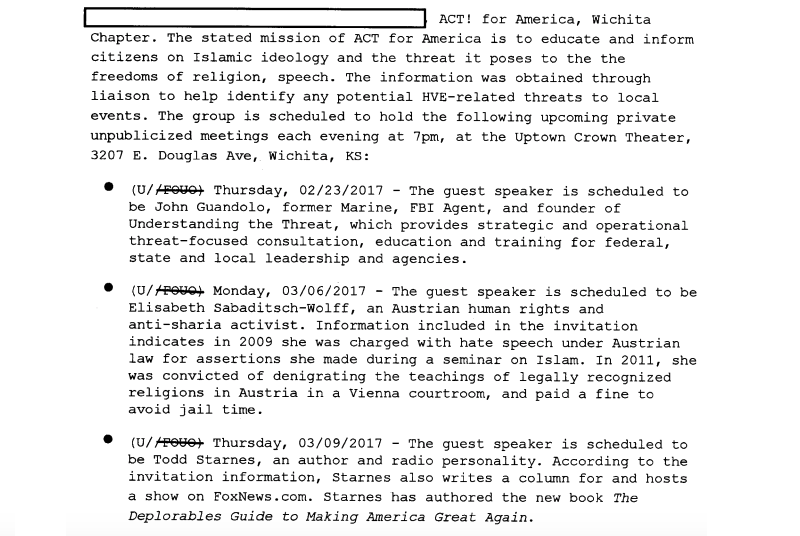 Asked to explain why she reached out to the Bureau, Ritchie did not respond. There is also no explanation in the release from the FBI, nor any explanation for why the Bureau thought ACT might be the victim of “homegrown violent extremism.” No threats against any of ACT’s events have been identified, merely a note that protestors might be present at an event several months after ACT reached out to the FBI. 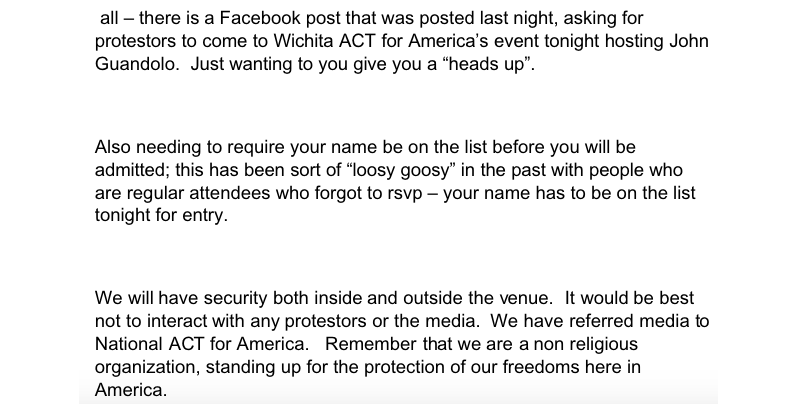 The FBI’s only comment about threats against any of ACT For America’s events was that no threats were known.

It’s unclear what the extent of the FBI’s liaison with ACT For America, or why the Bureau felt it was necessary. Ritchie says she doubts the FBI actually attended any of ACT’s meetings, but isn’t sure. She added that she had no knowledge of whether any other chapters had liaised with the Bureau. A second FOIA request has been filed to learn more about the Bureau’s planned participation in an event sponsored by ACT and the cancelation in response to public pressure. In the meantime, you can read the prior release embedded below or on the request page.