While recently portrayed as a bastion of progressive attitudes, the Central Intelligence Agency has a history of racial and gender disparity. As late as 1991, women were second class employees who were kept in the lower ranks, with men overwhelmingly occupying senior positions and leadership roles. A series of declassified memos help explain this disparity, showing CIA’s decades old resistance to putting women in charge of anything - even ensuring equal employment practices.

For the most part, the suggestions were fairly common sense. 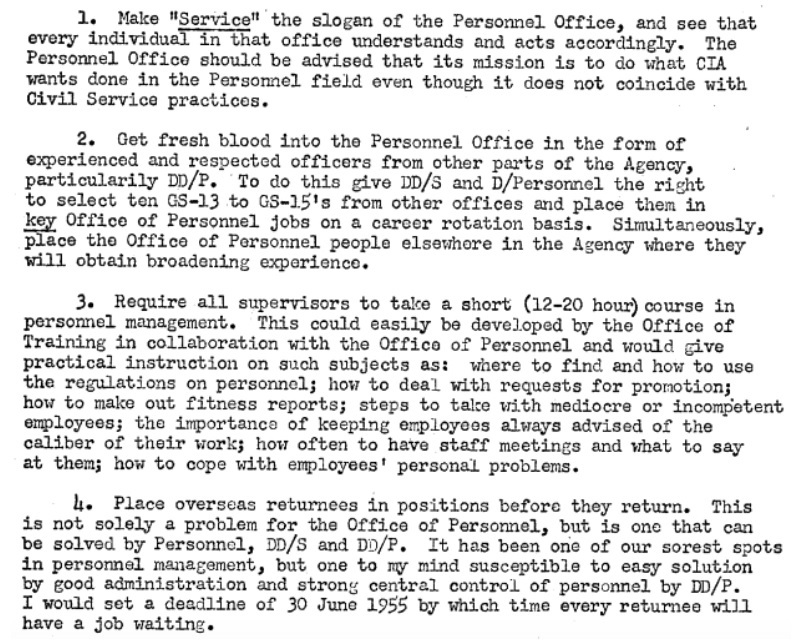 Some of the suggestions were as simple as ensuring better file management and to prevent people from tampering with the personnel files. At the time, anyone who wanted to could “do so with ease.”

The eighth suggestion, however, would turn out to be unexpectedly controversial. In it, the Inspector General proposed that the CIA “place a woman in a senior position in the Personnel Office and charge her with aggressively furthering the careers of women in the Agency.” 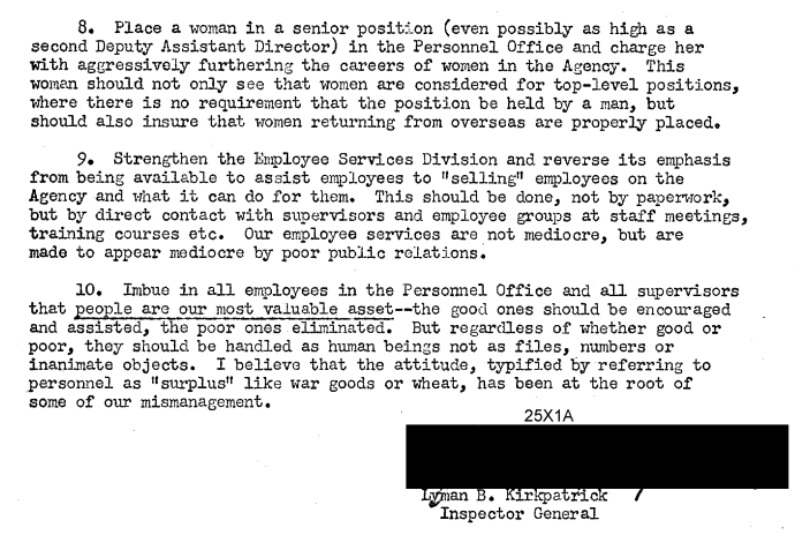 An undated and unsigned progress report argues simply that the CIA had “sustained its interest and emphasis in the proper utilization of women employees on a career basis.”

A later progress report (while the former was undated it referred to June 1955 in the future tense, while the second progress report is dated July 1955), simply says that “proper utilization of women employees on a career basis is affirmed.”

Seemingly between these two progress reports, CIA’s Director of Personnel, Harrison G. Reynolds, wrote a memo responding to the suggestions. Originally classified “Secret,” he admitted that while there was “some justification for the suggestion,” nevertheless, he argued that the problem fell within his responsibilities, and that he should “police this problem, rather than have an individual policing” him.

Nothing says you don’t need help getting women into senior management like refusing to put a woman into a senior position in your department - especially not when she might have some authority over you.

Under the accomplishments to date, the Director of Personnel reported that “informal” surveys had “revealed that on the whole, where there was not a realistic requirement for a male to occupy a position,” CIA was a meritocracy when it came to filling positions. 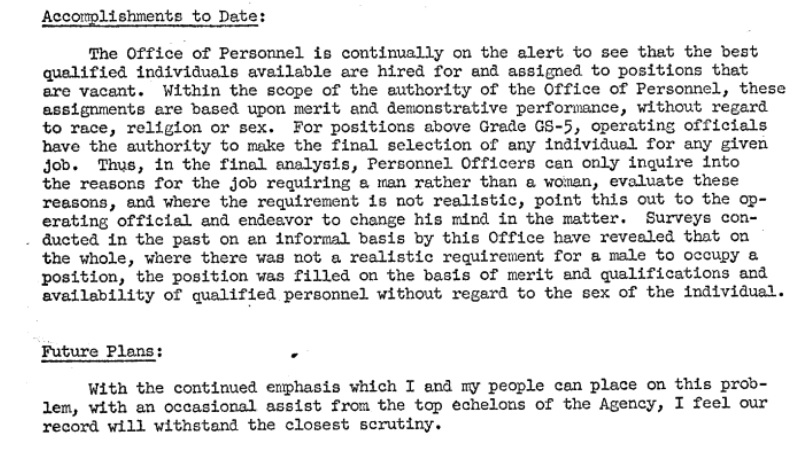 In closing his response and refusal to put a woman into a leadership role where she would be charge of furthering the careers of women in the Agency, the Director of Personnel said he was confident that their record “will withstand the closest scrutiny.” As we’ll see in an upcoming look at CIA’s internal “Glass Ceiling Study,” it would not - and did not - withstand a close scrutiny, not even after three decades to correct the imbalance the Director of Personnel said was well in hand. Until then, you can read his full response below.