During its 70 year history, a number of coffee-related controversies have gripped the Central Intelligence Agency - but perhaps none of them had such long-lasting impact on the caffeination of our nation’s clandestine service as a year-long inquiry into the legality of using government funds to buy CIA employees their daily pick-me-up.

After a lengthy departmental review, Director of Central Intelligence William Colby announced the decision to stop allowing government funds to be used to purchase coffee and food at meetings attended solely by U.S. Government employees in a June 12, 1975 memo: 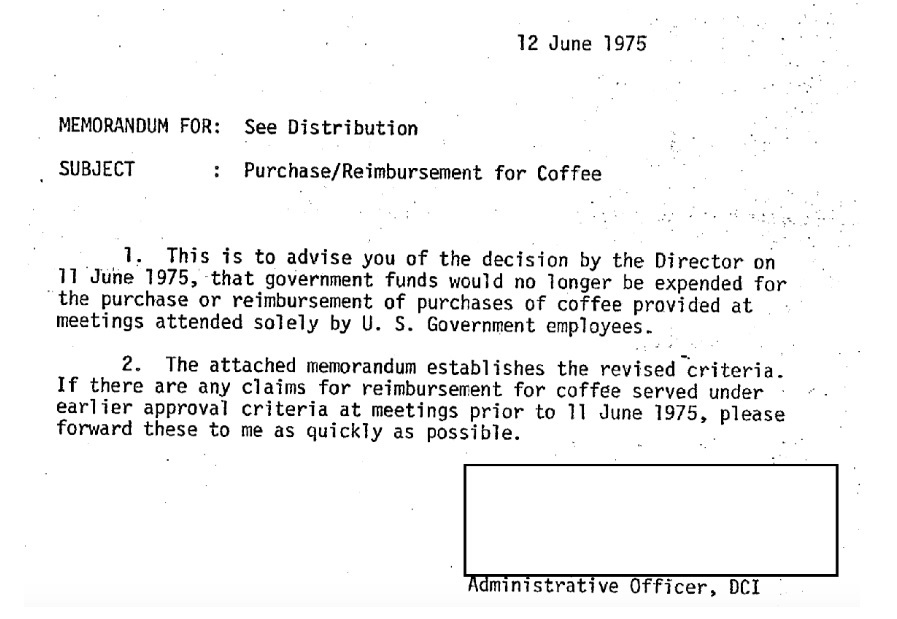 The decision came after what appeared to be a year-long administrative search for answers regarding the legality of reimbursing Government employees for food and coffee purchases. A 19-page memo from March 25, 1975 shows just how deep the agency searched for answers - among the 19 pages is the initial memo questioning the legality of the practice, an excerpt of the “Official Rules for Entertainment in the Executive Dining Room,” and formerly secret financial administration guidelines.

Also included is a 1970 letter from Acting Comptroller General R.F. Keller, addressed to the Director of the finance division of the Department of Health, Education, and Welfare’s Office of Education. Like the CIA, The Director of Finance was seeking guidance on the legality of coffee and food reimbursements for Office of Education employees who attended a conference at a hotel earlier that year.

Keller found “no authorizing legislation or appropriation act which would allow meals to be furnished at Government expense” and maintained that government funds should not be used for employee refreshments “even under unusual or inconvenient working conditions …” Though Keller’s decision was specifically regarding the Office of Education case, the lack of supporting legislation most likely played into the CIA’s ultimate decision to end the practice.

Forty years later, and that decision seems to have stuck - in the onboarding materials for the Agency’s FOIA office released in 2014, “coffee-drinkers” were encouraged to chip in to an office java fund.

As a private aside to any CIA FOIA officers reading this, we’d be happy to chip in a few dollars if it’ll help get us get a response to our requests within a year of two.

The 19 page memo is embedded below.