Recently released Federal Bureau of Investigation files, obtained in the ongoing lawsuit against the Bureau brought by the author and represented pro bono by Dan Novack, describe several investigations into the Church of Scientology, both foreign and domestic.

The first investigation detailed in the new files appears to involve Interpol and several FBI field offices, touching on an Internal Revenue Service investigation into COS, an allegedly murdered informant and a shredding party designed to cover-up Scientology money laundering. The second investigation originated in the Netherlands and looked at criminal behavior that included queries on terrorist and anti-democratic activity from Scientology. In response, the Bureau produced a memo acknowledging that they had “received numerous allegations of criminal violations against COS, including kidnapping, extortion, violations of child labor laws, prostitution, drugs and theft.” 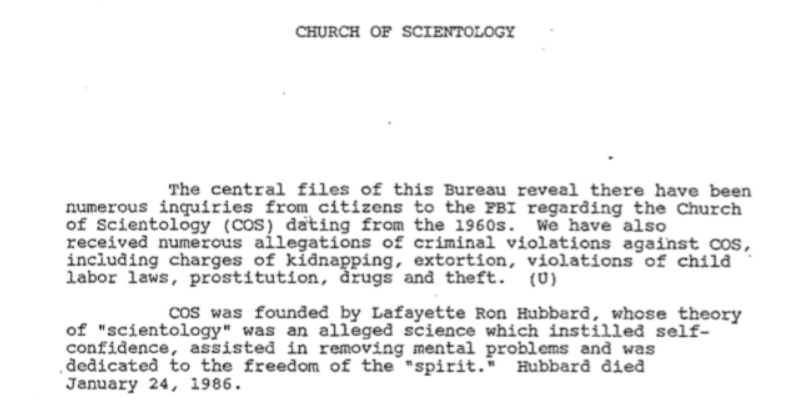 The first of the two investigations discussed in the new files appears to date back to September 7th, 1988 with a teletype from the FBI Director to the Bureau’s field offices in Boston, Los Angeles, Philadelphia, San Francisco, and Tampa. Although unclassified, the teletype was marked for the immediate attention of personnel at the various field offices. 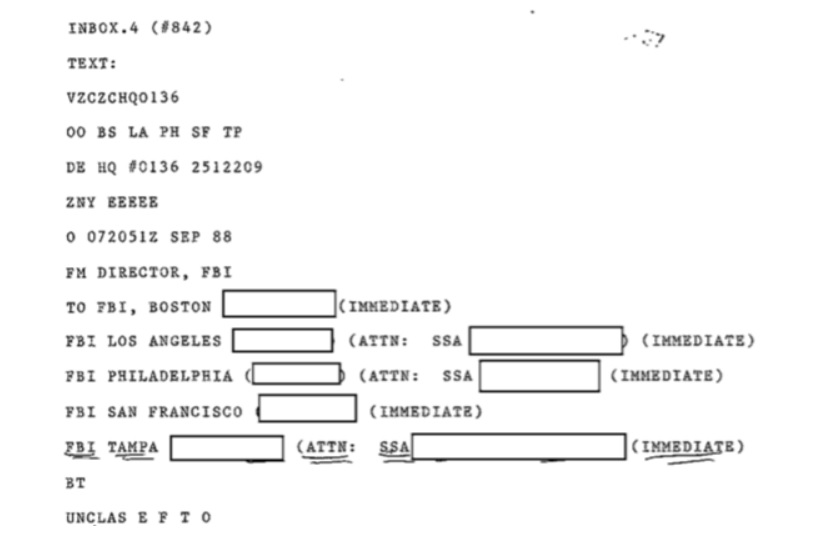 The teletype describes a letter rogatory, or letter of request, from a party whose identity remains redacted. According to the Director’s teletype, the unidentified party wished to travel to the U.S. as part of an investigation “involving the Church of Scientology.” The request was forwarded to Interpol by the DOJ’s Office of International Affairs. 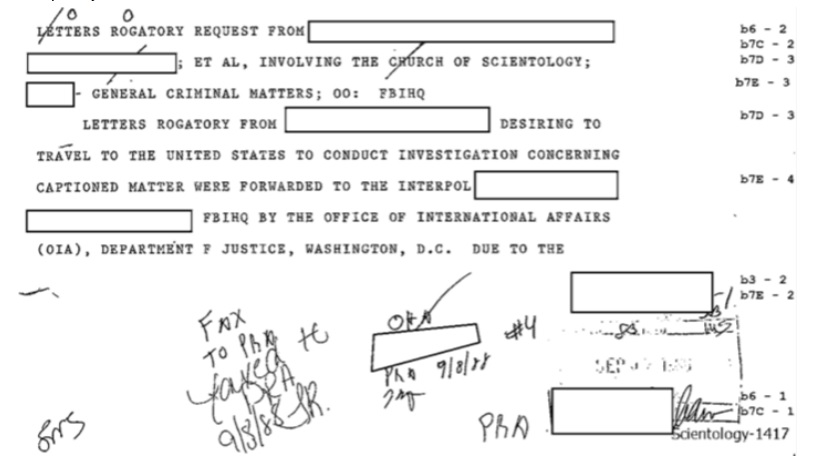 The request was considered urgent, likely due to the time constraints. If possible, the party which had sent the letters rogatory wanted to interview specific subjects by the week of September 12th. The Bureau wanted to be have an update on the status of potential witnesses for the DOJ, and presumably Interpol, “by close of business, September 8, 1988.” 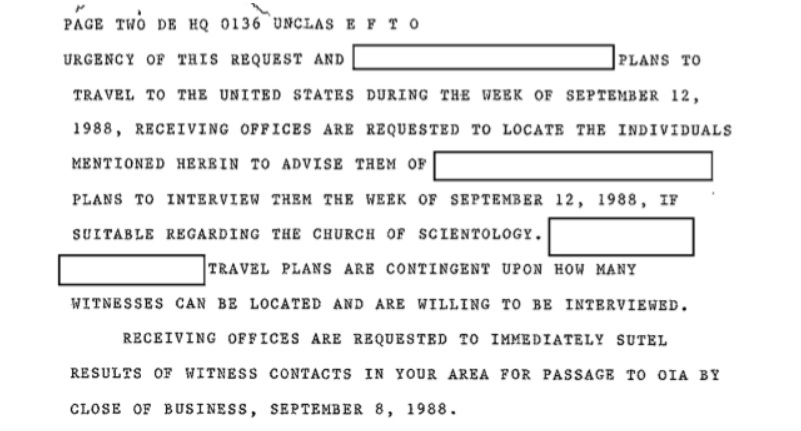 The requests for assistance seem to have been rather specific, going so far as to include specific questions for potential witnesses.

One of the witnesses in Boston that the Bureau sought to contact had been of assistance with several past probes. In Los Angeles, the FBI wanted to contact the IRS’ Criminal Division about investigations into Scientology’s “possible financial transgressions.” 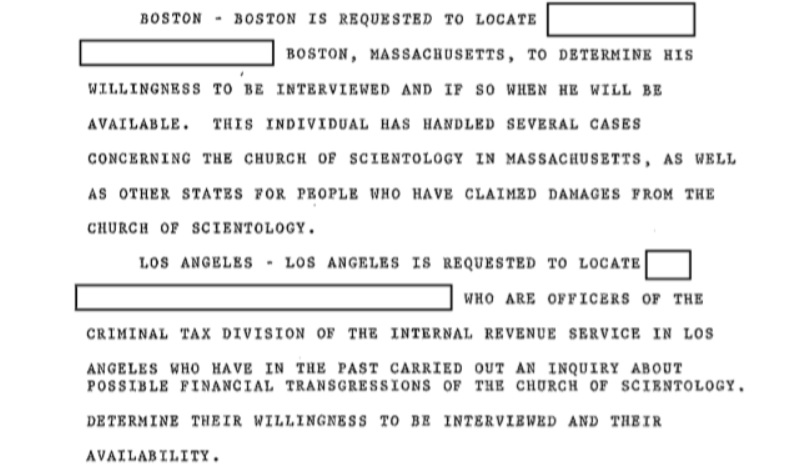 The IRS would later respond that they would be unable to be interviewed, due to a pending tax investigation against Scientology. In order to be interviewed, the IRS agents in question required a specific request from IRS Headquarters. 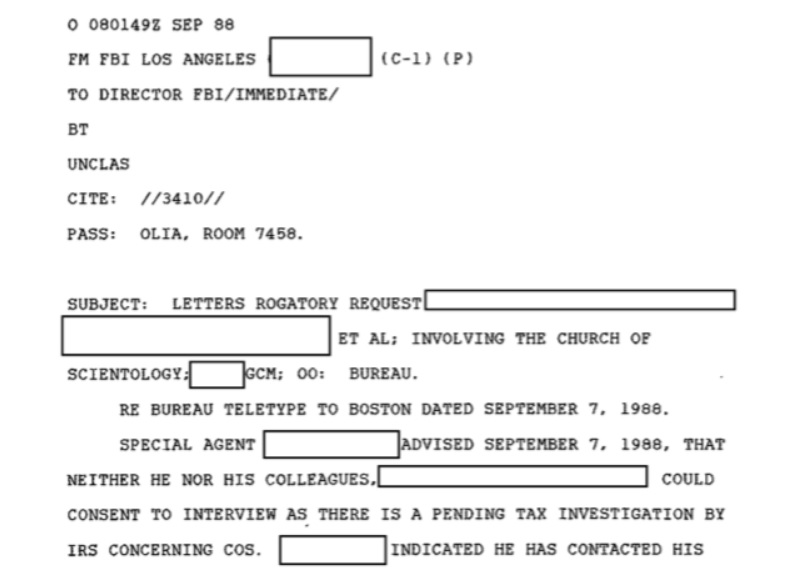 The tax investigation in question appears to have scared Scientology’s leadership, according to a report the FBI received from an informant about Scientology’s alleged plans to destroy financial documents, including memos reportedly written by L. Ron Hubbard himself. Hubbard had allegedly warned that the COS could never allow the material to fall into the hands of “any outside source.” [emphasis in original] 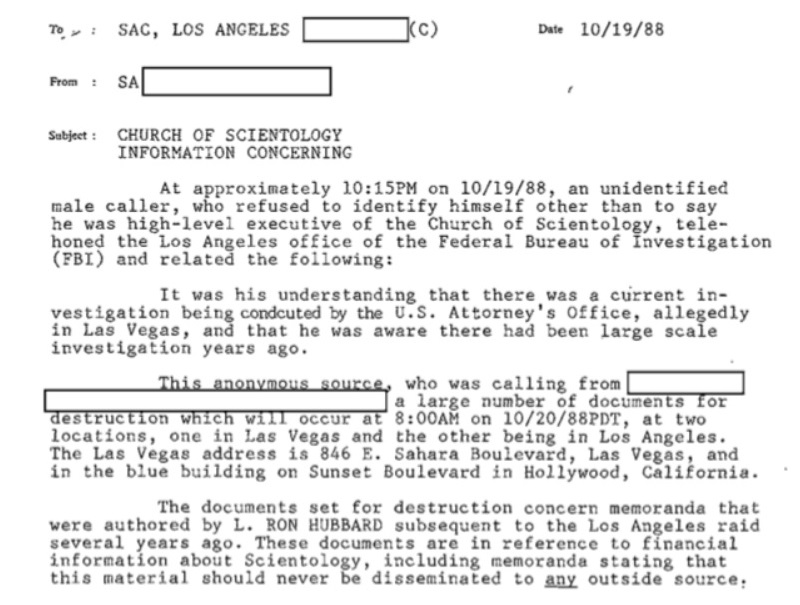 According to the source, the roughly 30,000 pages of materials set to be destroyed detailed Scientology’s money laundering efforts, detailing how Scientology “acquires, allocates, reports, and distributes their income and how they hide assets.”

The informant warned that as a result of the Bureau’s last raid, people within Scientology had been hurt - “some financially, others physically.” One of the memos reportedly set to be destroyed identified someone that Scientology’s leadership had been informing to the Bureau. The memo, apparently called an “internal policy letter,” allegedly stated that they should “under no circumstances” be allowed to leave the organization, with death being an acceptable measure to prevent their departure. According to the anonymous informant, the individual was killed. The Bureau notified the Assistant U.S. Attorney for Los Angeles as well as the Las Vegas Division, though the portion of the file released doesn’t show how they followed up on the lead. 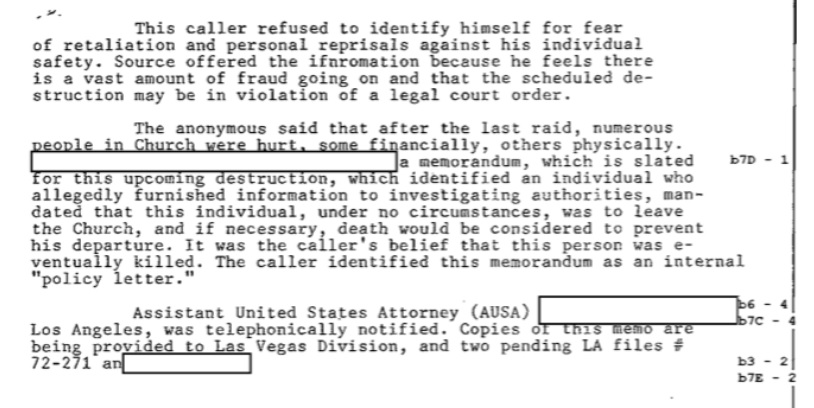 The Bureau also wanted to contact specific witnesses in Los Angeles, including informants who had “been effective members of the Church of Scientology and have held important offices in the organization including the management of money.” Other witnesses in L.A. were believed to have information on “various documents concerning the policies of Ron Hubbard the content of which is particularly interesting” to the requesting party. 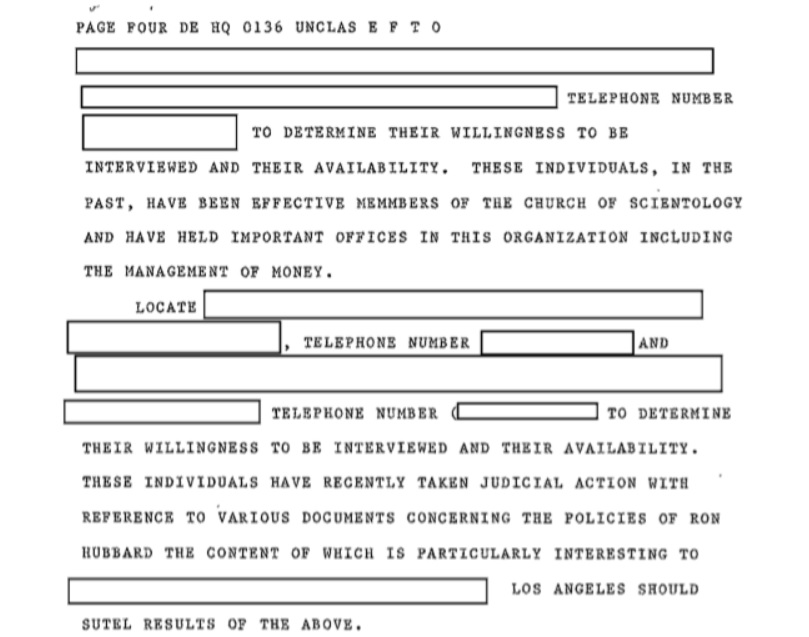 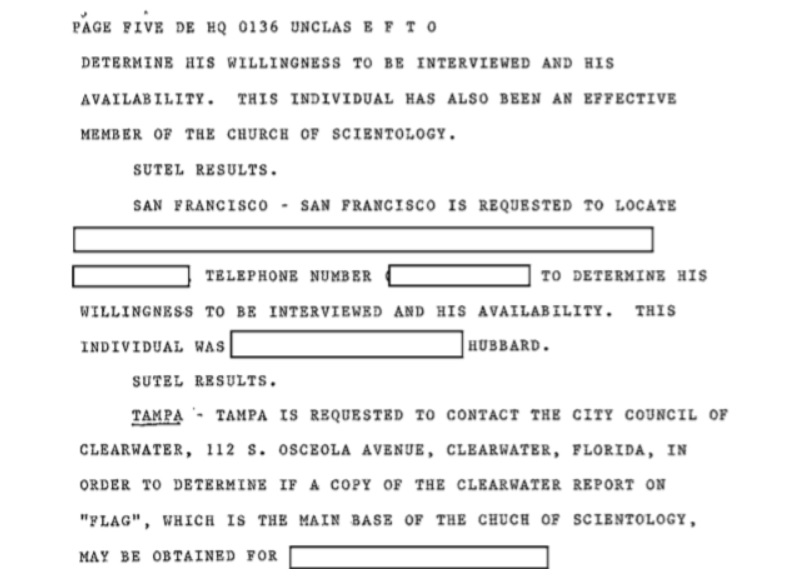 By September 12th, however, the requesting party had decided to delay their trip at least until October. 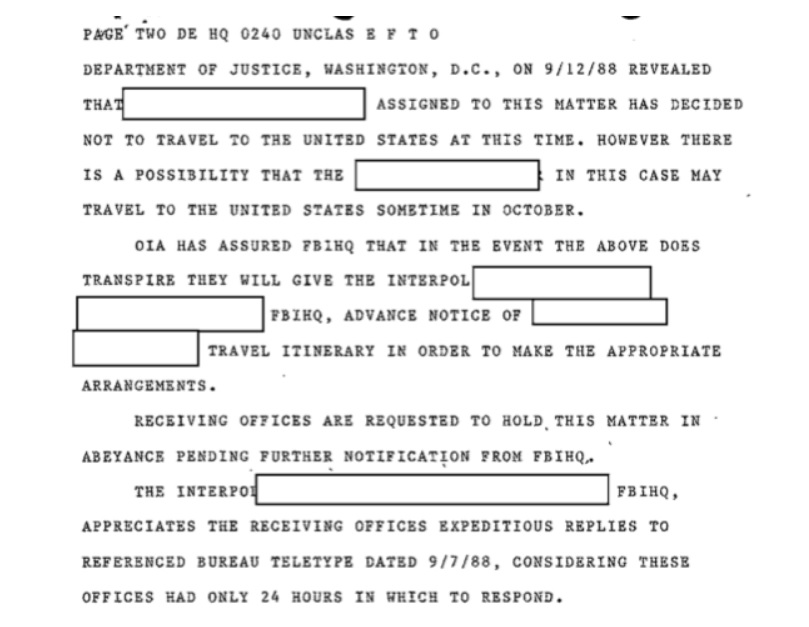 By the middle of November, the trip was planned for sometime “within the next few months.”

By August 1989, the FBI was informed that their assistance was “no longer required” and the Bureau closed its books on the matter. It’s not immediately clear from the released files if the investigation itself continued, or if the request for Bureau’s assistance was eventually renewed.

Approximately two years later, the Bureau received another request for assistance in a foreign investigation of Scientology. According to a mid-1991 airtel sent to the Director, the Netherlands were investigating the COS and requested information on the “criminal history of the known adherents to this organization” in addition to the Bureau’s analysis of the group. Significantly, the airtel was caption “domestic terrorism,” and in addition to being sent to the FBI Director, it was directed to the Bureau’s Domestic Terrorism Unit and the Terrorism Research and Analytical Center, among other offices. 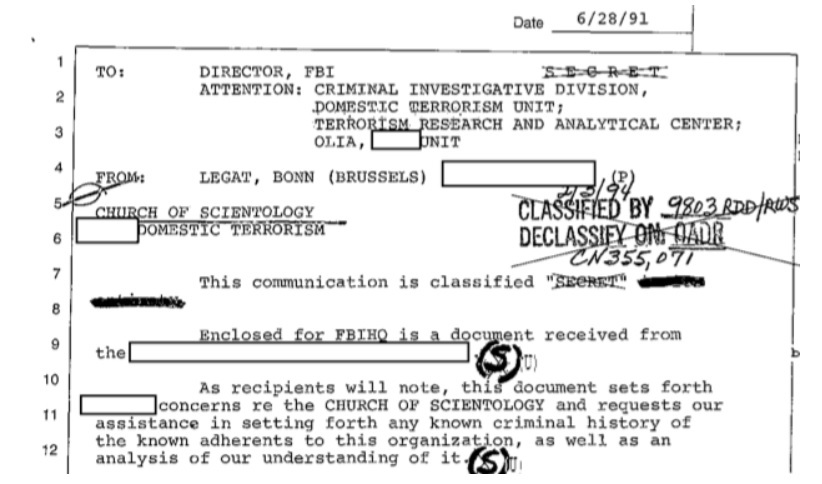 While the file released by the Bureau lacks a copy of the original request, captioning it “Domestic Terrorism” and directing it to two different terrorism related offices seems an unlikely quirk of happenstance. More likely, the original request from the Netherlands either mentioned or somehow implied terrorism be included in its investigation. The most direct description of the request comes from a declassified airtel dated September 30, 1991. The airtel stated that there was a “criminal investigation of [Scientology’s] activities in the Netherlands” and that the investigator had “requested FBI assistance in conducting a criminal record search concerning any criminal or anti-democratic activity in the United States.”

Whatever the Netherland’s interest in Scientology and terrorism, according to the FBI Director on November 22, 1991, a search of the Terrorism Research and Analytical Center had produced “negative results” and the Domestic Terrorism Unit requested the Legat Brussels office recaption the matter, reporting that they hadn’t investigated COS for domestic terrorism. 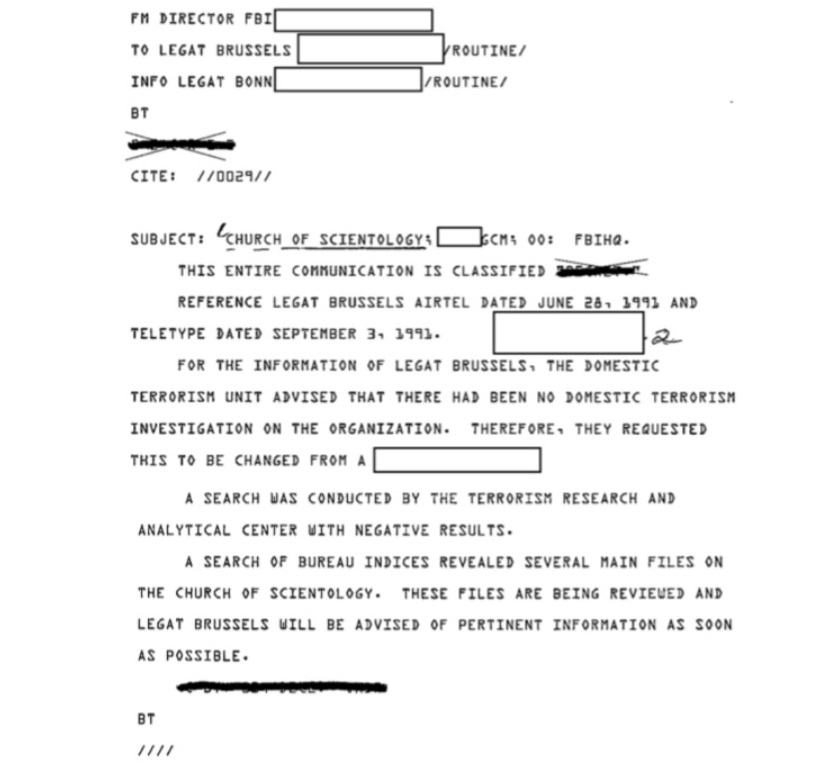 In early March 1992, the FBI Director sent an airtel with a two page memo on Scientology’s activities.

According to the memo, the FBI had been receiving inquiries from the public about COS since the 1960s. More significantly, the Bureau had “received numerous allegations of criminal violations against COS, including charges of kidnapping, extortion, violations of child labor laws, prostitution, drugs and theft.” It went on to note that L. Ron Hubbard had founded the COS, and that his theories of scientology and dianetics were alleged to create self confidence and remove mental problems. The memo went on to note several instances of Scientology’s high profile criminality.

In May 1976, “members of COS impersonated IRs agents” to gain access to documents in the Washington D.C. U.S. Attorney’s office. They were caught while copying government documents, leading to “a massive investigation by the FBI against various officials of the COS for violations ranging from Theft of Government Property to Aiding and Abetting.” The FBI had stumbled onto Operation Snow White, which remains a particular focus of the ongoing FOIA lawsuit against the Bureau. During the Bureau’s investigation, they seized over 20,000 documents from COS, ultimately resulting in the convictions of eleven Scientology officials “for directing a conspiracy to steal Government documents about COS.” COS, in turn, filed lawsuits alleging that they were being harassed by the FBI. 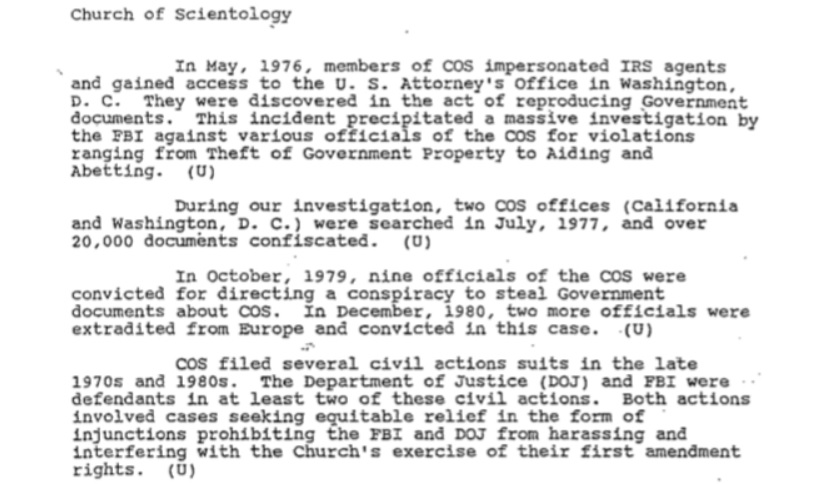 The memo also describes a 1984 investigation into an unsubstantiated scheme in which COS was using “drugs and prostitutes to compromise a Federal judge presiding over civil litigation involving the COS.” The following year, the Bureau investigated COS for Obstruction of Justice following reports that COS had hired private investigators to learn what the FBI was doing in the “investigation of the Hubbard check case and to determine the identities of [FBI] agents.” The memo concluded by noting Scientology’s alleged “enemy list” of targets for attempts to “discredit, embarrass or harass former members of COS, their attorneys and others.”

It’s unclear what happened with the Netherlands investigation, or even what was specifically being investigated except that it involved criminal and anti-democratic activity, and was relevant to the FBI’s terrorism offices. The FBI’s response, while minimal, serves to highlight the importance of the ongoing lawsuit against the Bureau for files on Scientology in general and on Operation Snow White in particular.

In just two sets of memos, the FBI laid laid out a number of investigations into Scientology, as well as allegations from informants. The COS was accused of killing an informant, money laundering and destroying evidence, infiltrating the government to steal documents, targeting enemies for harassment, committing obstruction of justice, attempting to compromise a Federal judge so they would rule in COS’ favor, kidnapping, extortion, child slavery, sexual slavery, drugs and theft. Considering all of that, it’s no surprise the COS tried to make the FBI destroy their files on Scientology and control what could be released through FOIA.

You can read the file from the latest release below, or the rest on the request page.