A recent Federal Bureau of Investigation FOIA release prompted by the author’s lawsuit, represented pro-bono by Dan Novack and filed along with Radar Online, shows that between 1990 and 1994, the President of the Church of Scientology International sent the FBI a series of letters instructing the Bureau on what records the Scientology felt the FBI was entitled to keep or to release through FOIA. 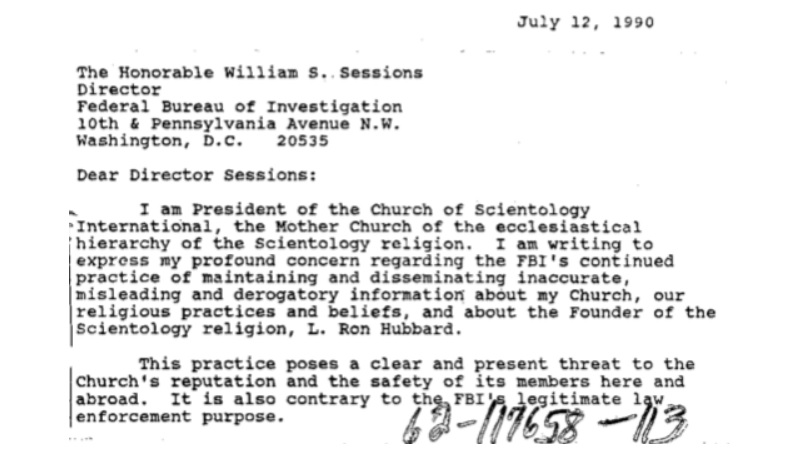 According to the letters from Scientology’s leadership, the Bureau lacked jurisdiction and cause to investigate COS. The letters also argued that any investigations by the Bureau would violate the First Amendment.

The letters alleged that the Bureau was a “repository of untrue, unverified, and irrelevant information.” Moreover, Scientology alleged that the FBI improperly released some of the information, and conveyed “the unwarranted and demonstrably false impression that the Church is not a bona fide religion.”

That said, Scientology’s leadership acknowledged that much of the Bureau’s files were comprised of public press reports. The FBI’s possession of these newspaper articles, Scientology argued, violated the First Amendment rights of COS.

According to Scientology’s leadership, nobody in COS had ever indicted or investigated, much less been convicted of any crime. They apparently chose to ignore cases like Operation Snow White, which saw the Scientology leadership - including members of Hubbard’s family - plead guilty.

Eventually, these charges and actions are acknowledged in a truly minimal fashion, declaring that they were the work of fringe members of Scientology acting contrary to its policies, describing them as former staff members who “were removed by Church leaders.” The letter then immediately cites the fact that these “fringe members” were also some of COS’ leaders. 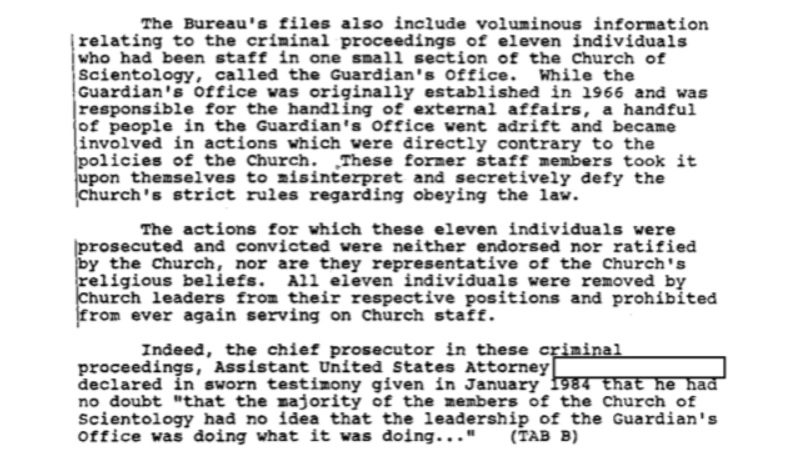 Finally, in an ironic twist for an organization that had relied heavily on FOIA requests in its fight with the Internal Revenue Service, COS expressed outrage that some of the Bureau’s files were released through the Freedom of Information Act.

The President of Scientology International ended their initial letter by proposing that Scientology’s leadership be allowed to review the Bureau’s files with the goal of “expunging all incorrect information,” presumably as determined by Scientology.

The FBI’s Assistant Director for Legal Counsel responded by citing the law and politely refusing the demands made by Scientology’s leadership. 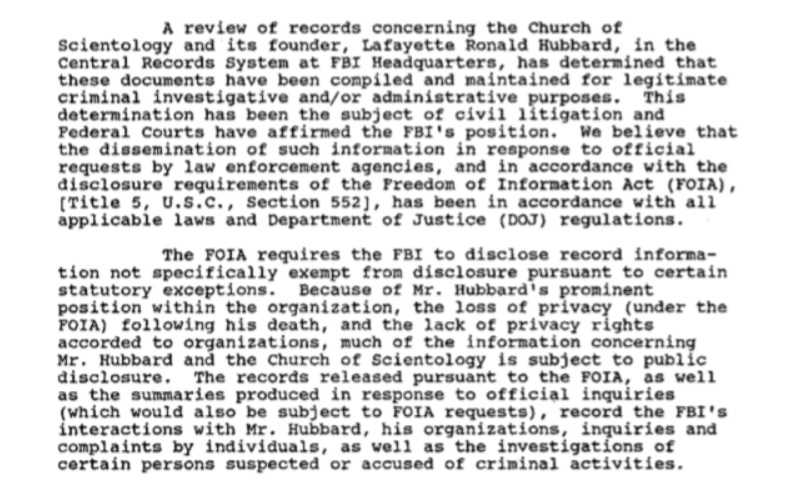 Scientology’s leadership was less than satisfied with the Bureau’s response. In addition to the letter from the President of Scientology International, COS had mailed the Bureau a number of pamphlets on Scientology in August 1991. These booklets were not provided to the Bureau’s one of investigative arms, but to the FOIA office. According to their letter, the explicit purpose of this was that the Bureau “send a copy of these to future FOIA requesters.” 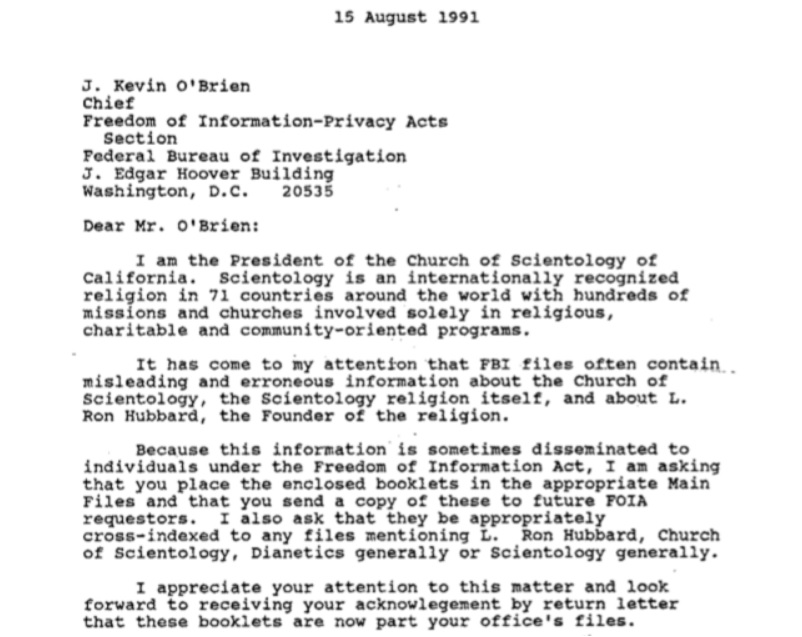 The FBI again politely refused Scientology’s demand that the Bureau become a distributor of Scientology materials handpicked by COS.

Writing “on behalf of the Church,” the letter explained that they were “extremely dismayed” by the Bureau’s refusal “to even consider placing these booklets in the files of the Church and Mr. Hubbard.”

The letter goes on to reiterate that the explicit purpose in sending the booklets was creating conditions that would result in FOIA requesters receiving Scientology materials handpicked by COS.

The Assistant Director of the Bureau’s Information Management Division politely responded once more, pointing out that Scientology’s claims and demands stemmed “from a misunderstanding of the role of the FBI and the specific laws and regulations” being discussed. 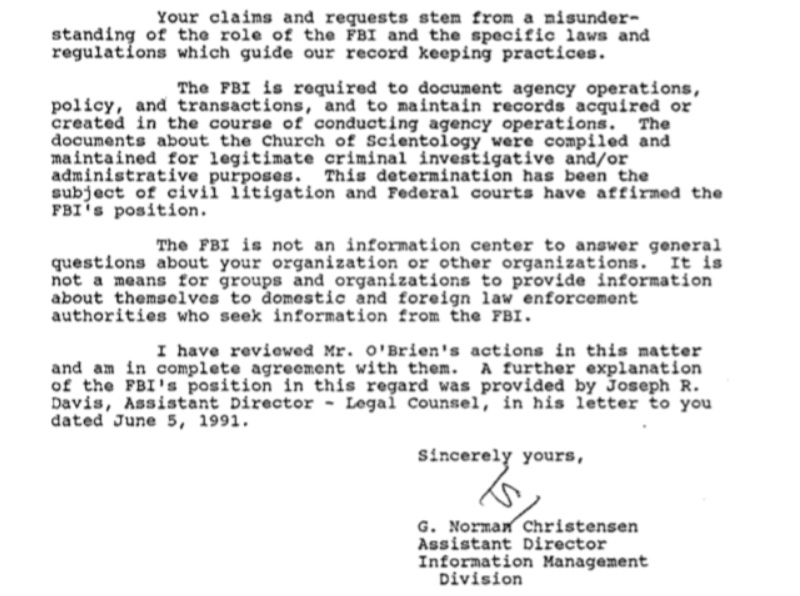 After William Sessions stepped down as the FBI Director, Scientology’s leadership decided to try again with Louis Freeh, sending him a copy of the book What Is Scientology? The book was returned with a polite note stating the Director was unable to accept any gifts. 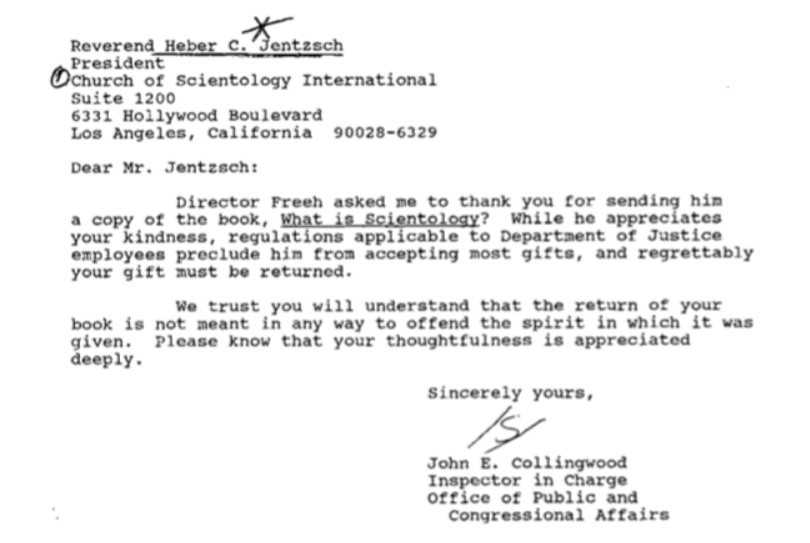 Thankfully, Scientology’s attempts to force the Bureau to purge their files of records on the COS and replace them with handpicked Scientology materials which the Bureau would then send out to all future FOIA requesters was a resounding failure. That this story itself was only made possible through FOIA is altogether fitting.

You can read the exchange of letters in the section of the FBI file embedded below, and the rest on the request page.