Last December, Federal Communications Commission Chairman Ajit Pai starred in a “PSA” produced by The Daily Caller. In the video, Pai addressed all the “trolls” in the net neutrality debate, reassuring the public that they will still be able to enjoy things on the internet after its repeal. To illustrate this, Pai does the absolute polar opposite of an enjoyable thing on the internet: the Harlem Shake.

That segment actually led to the video being temporarily removed from YouTube after a copyright complaint from the record label Mad Decent.

Curious as to whose idea this was, I filed a FOIA for emails between The Daily Caller and the FCC, as well as any talking points regarding this huge PR coup. Four months later, the FCC responded. The agency found two pages of emails but would be withholding them in their entirety under FOIA’s infamous b(5) exemption regarding deliberative process. 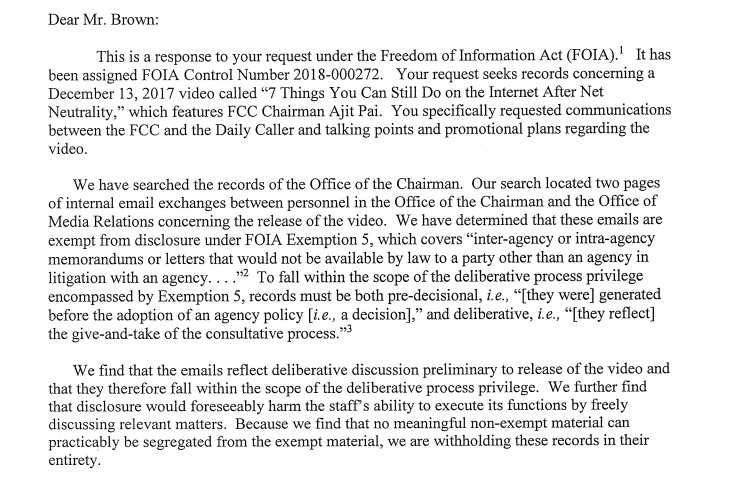 This isn’t even the first time the FCC has used b(5) to deny access to records regarding Pai starring in an embarrassing video - the agency rejected Gizmodo’s request for records relating to a comedy skit in which Pai joked about being a “Verizon puppet,” similarly under b(5).

Read the rejection letter is embedded below or on the request page. If you’re interested in Pai and the fight for net neutrality, you can check out his calendar here.

Image by Gage Skidmore via Wikimedia Commons and is licensed under CC-BY 2.0