A FOIA request to the National Archives from early 2015 has finally yielded the Federal Bureau of Investigation’s file on historian and first prime minister of Trinidad and Tobago, Eric Williams. In addition to the FBI monitoring Williams during his tenure at Howard University, the file contains reports from Naval Intelligence and the Central Intelligence Agency, who closely monitored his shift from academia into politics, including a request by Naval Intelligence that the FBI gather embarrassing personal details from William’s ex-wife in an attempt to hurt his chances during an election.

In 1941, three years before the publication of his influential book Capitalism and Slavery, the FBI chose not to pursue a full investigation of Williams for involvement in a number of campus organizations, despite the claims of a confidential informant that those groups were anti-American in nature. 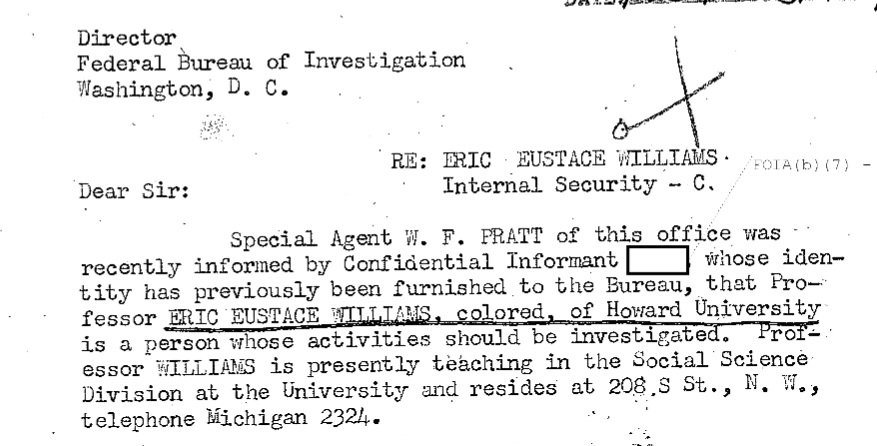 Williams’ political views apparently did not become a concern to the U.S. government until after his return to Trinidad and Tobago in 1955. With his scholarship on slavery and the treatment of African-descended people in the Caribbean as a basis, Naval Intelligence on the island began reporting what they saw as an emerging “anti-white complex” which included both a reluctance to speak with white people in social gatherings, as well as a rejection of U.S. politics and economic interests in the Caribbean. 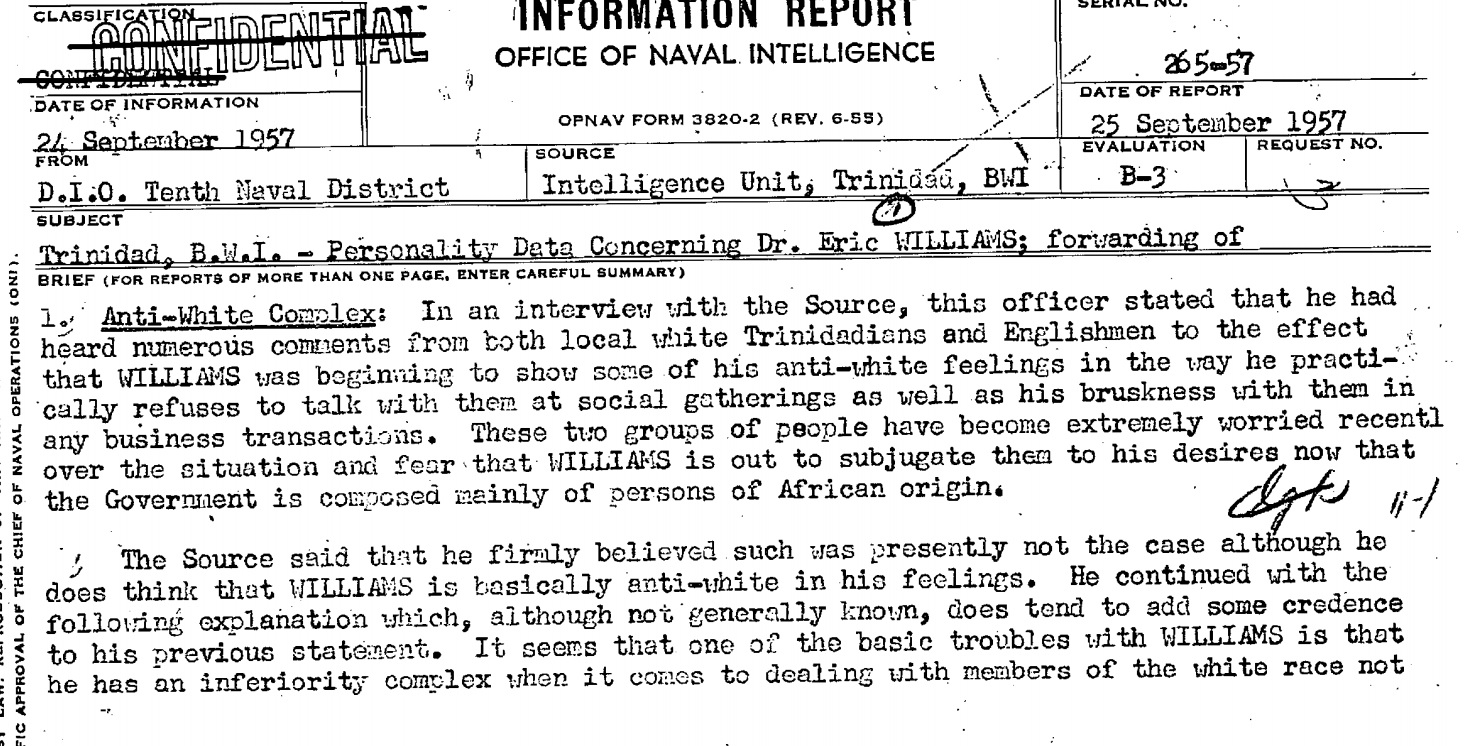 More reports showed an increased preoccupation on the part of Naval Intelligence in Williams’ social anxiety. 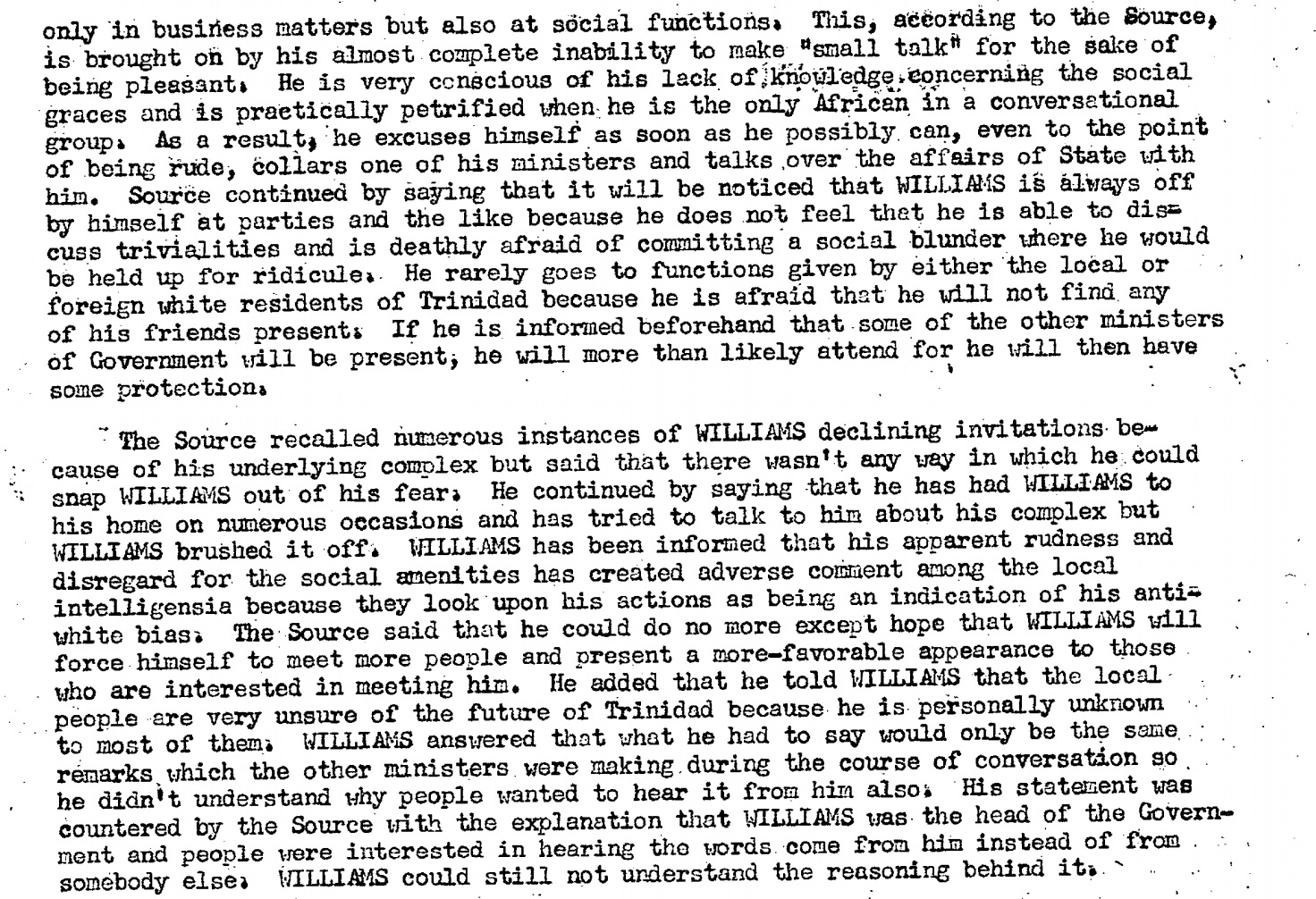 Also trouble to Naval Intelligence was his close friendship and proximity to leftist scholar C.L.R. James.

As Williams gained political notoriety, by 1959, Naval Intelligence feared for the status of the U.S.’s naval base in the area should Williams win an upcoming election. For this reason, the FBI documents a request from the Navy that Bureau agents contact his ex-wife “in order to obtain information dealing with his personal life which could be fed to the opposition party in Trinidad for use against Williams.”

Either the Bureau didn’t follow through on the request, or they were unsuccessful - Williams remained prime minister until his death in 1981. Read the full file embedded below, or on the request page.