A formerly TOP SECRET bulletin from 1973 uncovered in the Central Intelligence Agency’s archives shows the CIA concerned that their long-backed political party in Italy, the Christian Democrats, had placed themselves in a precarious position amid a country-wide pasta shortage.

The pasta paucity, the Agency noted, was an unintended consequence of a series of price controls for staple foods. Farmers had begun hoarding wheat in response …

which in turn led to the pasta industry threatening a shutdown in protest. The Christian Democrats attempted to solve the problem by importing grain from the U.S., but as we were going through our own shortage at the time, it was to no avail.

With the only other options being to strain the budget by looking for another importer,or to chance a bread shortage by lifting the legal restrictions on making pasta out of soft wheat, the Christian Democrats were most likely forced to fold on the issue. Either raise the price on pasta or risk riots over a complete lack of pasta. 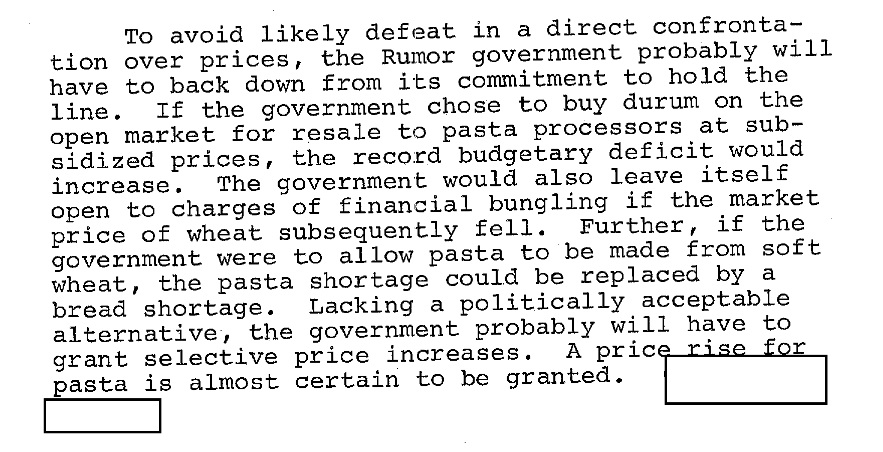 If that sounds like a bit of an overreaction to a scarcity of spaghetti, understand that just a few months prior the Prime Minister had narrowly escaped a bombing attack from a disgruntled anarchist. If, as the saying goes, we are all only nine meals from total societal collapse, then the Italians are already doubling-back for seconds.