Bayard Rustin was many things: He was a key organizer of the 1963 March on Washington, an advocate for Soviet Jewry, and, “a convicted homosexual,” according to his Federal Bureau of Investigation file. Despite being what many would consider a textbook lefty, Rustin also moonlighted for the Central Intelligence Agency. While that might seem like an irreconcilable contradiction for a man who sat in prison for two years because he refused to serve in World War II, contradictions aren’t there to be reconciled; they’re there to confound.

But first, a little background: by the early 60s, according to part of a Church Committee report, the CIA had decided that their pet dictator in the Dominican Republic, President Rafael Trujillo, had officially become more trouble than he was worth:

Trujillo was notoriously violent, particularly toward political rivals and Haitian residents of the DR. And so, fearing unwanted attention for their role in propping him up, in 1961 the Agency “assisted” in Trujillo’s assassination.

Following Trujillo’s assassination, Juan Bosch was elected, only to be subsequently overthrown in a 1963 coup that was supported by, surprise, the CIA, who feared his government could turn Communist: 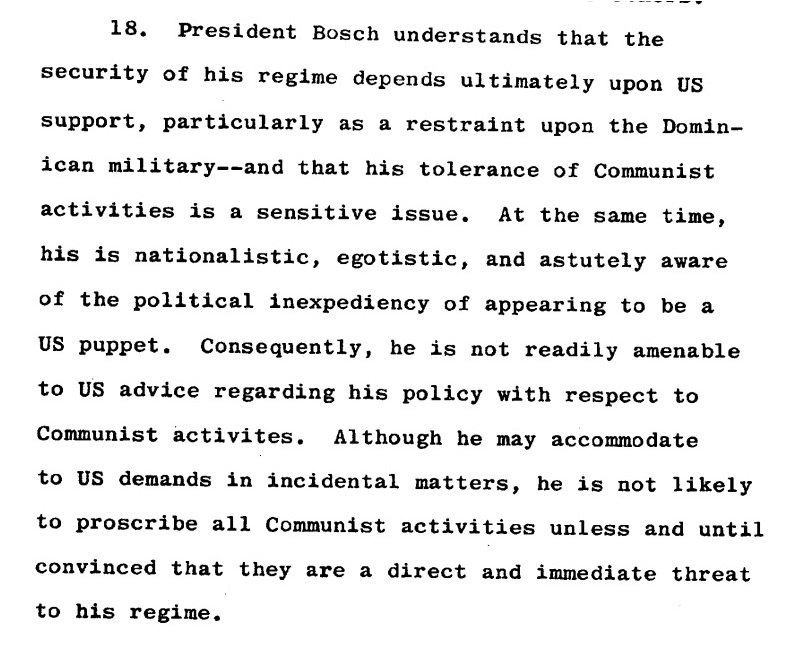 President Lyndon Johnson, in what was quickly becoming something of a signature move, then got on TV and lied about the American embassy being under siege. With this nonexistent threat to American lives having established a false pretext for an invasion, LBJ sent Marines into the DR on April 28th, 1965, where they eventually stayed through the do-over election on June 1, 1966.

According to the files, Rustin first traveled to the DR on behalf of the Agency in April 1966 to help determine whether an election would be possible (IE, favorable to U.S. interests).

Despite Rustin being in the DR to work for the Agency, the FBI’s surveillance of him seems to indicate that they weren’t privy to his role in the election. Prior to Rustin’s departure, the Bureau was led to believe by a source that leaked passport reservation information to them that Rustin was heading to Israel.

While Rustin’s decision to work on behalf of a government he had long protested in such a brutal ongoing enterprise was shocking to those who knew him, it became somewhat less shocking when his position on the Vietnam War became known among his compatriots:

Despite Rustin’s support for issues that seemed completely out of tune with the political stances he took as a younger man, he remained an advisor to Martin Luther King Jr. until his assassination in 1968, and continued working for the cause of civil rights afterwards. Rustin was smart as they come and a master strategist, and it’s entirely possible that his pacifism and his tolerance of warmongering were ultimately one and the same - in that each was a tool used to further his strategy for the power to bring about change.

You can read part of the new release embedded below, and rest on the request page.