A recently released Federal Bureau of Investigation file shows that then-director J. Edgar Hoover personally wrote to the head of the Internal Revenue Service to complain about the tax exempt status of pro-peace groups, alleging they were led by ‘concealed Communists’ and that they sent out “literature favorable to Russia and in opposition to the U.S. foreign policy” - literature such as the Bill of Rights. The file also reveals that Hoover personally requested a former Governor of the United States Virgin Islands and then-U.S. federal judge be investigated by the Bureau for his association with the National Association for the Advancement of Colored People.

Other files show that the FBI’s tracking of NAACP members was hardly a one time affair, as the Bureau dedicated an entire index to NAACP members and leaders. Other groups that received this treatment included La Cosa Nostra (the mafia) and alleged Communists. While the FBI has only acknowledged a handful of people being assigned to their special NAACP index, the Bureau’s dedication to tracking the group underlines the severe racism of the time - a state of affairs which, it appears, has hardly abated.

After a conversation with future Supreme Court Justice Thurgood Marshall and then member of the NAACP and NAACP Legal Defense Fund, Max Rabb of the Eisenhower Administration reported to the Bureau that two names had been supplied to him by Marshall, saying that they “influenced the NAACP” on a national level. One of the two people was identified as Judge William Henry Hastie, prompting Hoover to personally request information about him on the sole basis of his affiliation with the NAACP.

In response, a memo was produced noting that, among other things, Judge Hastie was affiliated with the Southern Conference for Human Welfare, the National Negro Congress, and the National Conference on Constitutional Liberties. The Bureau’s memo noted with apart alarm that these groups had been designated Executive Order 10450, which targeted spies and anyone involved in “any criminal, infamous, dishonest, immoral, or notoriously disgraceful conduct, habitual use of intoxicants to excess, drug addiction, or sexual perversion.”

For its part, the Central Intelligence Agency objected to the portions of the EO that acknowledged the right to legal counsel, arguing “informally” that portions of the EO didn’t apply to the Agency. This EO wouldn’t be explicitly repealed until the final days of the Obama administration as a result of it’s final Executive Order, EO 13764.

Hoover’s request for information also turned up the FBI’s curious idea of what constituted “Treason.” One of the individuals who had been named was Samuel Ralph Harlow, whose FBI file apparently went back at least two decades prior. In one instance, an informant had complained that Harlow was part of the National Committee of National Religion and Labor Foundation, which was “very leftist” and accused of having “forsaken” G-d in favor of attempting “to solve the world’s troubles by Socialist formulae.” In other words, the group had abandoned “thoughts and prayers” in favor of attempting an actual policy solution.

According to the FBI, this was taken from case number 61-443, serial number 1226. The prefix number of 61 indicates that it was filed under “treason.”

The Bureau also noted that Harlow had been part of some of the same organizations as Judge Hastie, which had been identified pursuant to EO 10450. 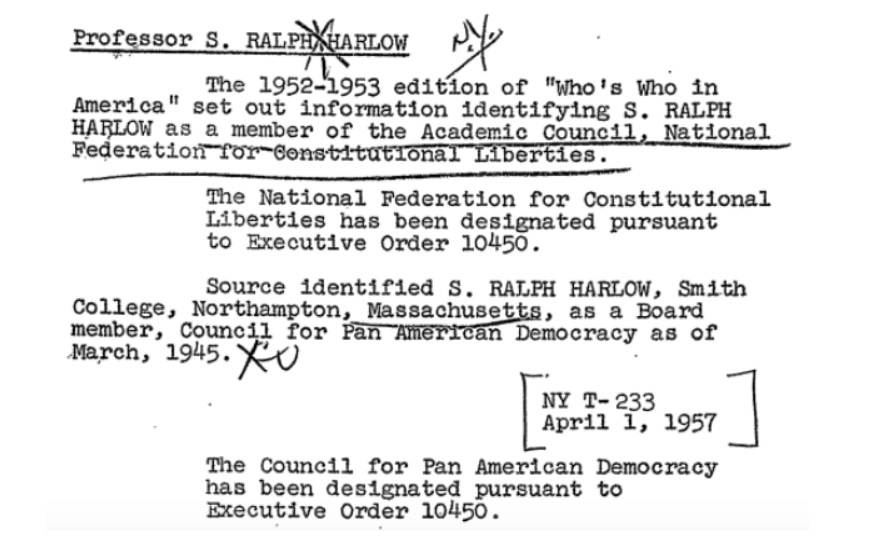 One of the organizations that Harlow was associated with appears to have been the target of Hoover’s particular disdain. Hoover went as far as to write a letter, marked CONFIDENTIAL, to the IRS Commissioner about a group called Promoting Enduring Peace, citing it as a matter of Internal Security.

The purpose of the letter was ostensibly to inform the IRS Commissioner of the IRS’ activities, specifically that they had granted the group tax exempt status. Given that Hoover appears to have had no reason to doubt that the IRS was aware of its own activities, this may have been an excuse to send the letter and prod the IRS Commissioner into withdrawing the tax exempt status without actually requesting that.

The Bureau noted that, according to the Acting Superintendent of the local Post Office, the group’s primary objective was distributing “literature favorable to Russia and in opposition to the U.S. foreign policy.” According to an unnamed confidential informant, the group’s leader was also “a concealed member of the Communist Party.”

As for the “literature favorable to Russia and in opposition to the U.S. foreign policy”? It included such subversive materials as the United Nations’ Universal Declaration of Human Rights and the U.S.’ own Bill of Rights. It was this pamphlet that Hoover cited in his letter to the IRS. Hoover’s letter did not mention or cite any other publications or pamphlets produced by the group.

You can read portions of the file below, and peruse the rest on the request page.