By now, you’ve all heard that Amazon is opening a second headquarters, and towns and states across the country are courting the tech giant for the 50,000 jobs and $5 billion Amazon is offering. But what are these places offering Amazon? And what does that mean for your town?

In order to figure it out, you’ll have to get your hands on a copy of a bid. San Francisco’s is embedded below.

Then, start by asking yourself the following seven questions.

1. Are they offering proposed changes to the tax incentive program?

Will these changes be instated whether or not Amazon puts its second headquarters there? New Jersey Governor Chris Christie proposed a number of legislative changes to the tax incentive program Grow NJ in response to Amazon’s request for proposals. The changes would allow companies to use the tax incentives anywhere in the state, not just economically depressed cities, and double the cap on subsidies, from $5,000 per job created to $10,000. Christie has promised that the bill will be passed before he leaves office, on January 16th. Amazon is not expected to make a decision about the second headquarters until next year.

Illinois has seen tax breaks fail drastically in the past, as reported on by the Chicago Tribune.

2. Are there developers specifically named in the bid?

Why did the the municipality select that developer over another? Irvine, California partnered with a developer, Irvine Company, to produce a bid that centers around Irvine Company renting space to Amazon. 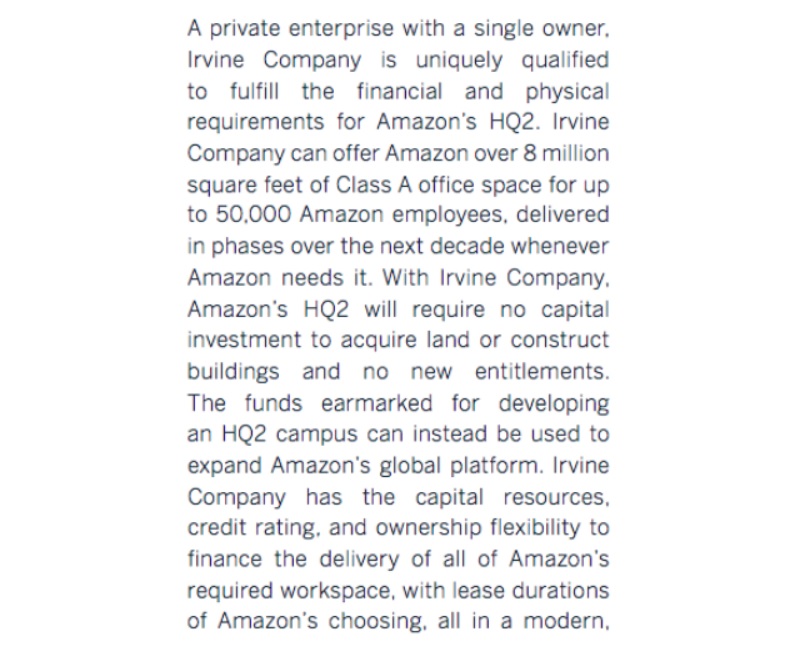 3. Is the town asking for anything in return, like for Amazon to hire locally or source local materials?

4. Does the bid offer a transportation system overhaul?

What do other local groups think about that proposed transportation system? Missouri envisioned a Hyperloop, which would carry passengers at 700 miles per hour, to connect St. Louis, Columbia and Kansas City.

5. Are any nonprofits that work in workforce development or community development mentioned in the bid?

6. Does the bid discuss the non-material benefits of the town, like the number of recent college graduates?

Boston makes a point to brag about its academic bounty.

7. Does the bid mention a streamlined regulatory process, like California offered?

Thanks to Good Jobs First and The Partnership for Working Families for their advice on analyzing bids. For more advice from them, check out their tip sheet on the bids for Amazon’s second headquarters.

Image by Álvaro Ibáñez via Wikimedia Commons and licensed under Creative Commons BY 2.0.

Adanya Lustig sent this request to the Mayor's Office of Boston, MA

Adanya Lustig sent this request to the The Bay Area Council of San Francisco, CA