In the last weeks of the Obama administration, Jeh Johnson’s Department of Homeland Security (DHS) announced the recipients of its $30 million Countering Violent Extremism (CVE) grants. “The funding,” read Johnson’s statement, “will go for activities that include intervention, developing resilience, challenging the narrative, and building capacity.” The recipients of the grants included local government agencies, universities, and non-profit organizations.

One of these organizations was the Denver Police Department (DPD), which was approved for a $240,000 grant for “training and engagement.” These funds, however, were only half of what the DPD had requested, according to the grant proposal acquired through a Colorado Open Records Act request. 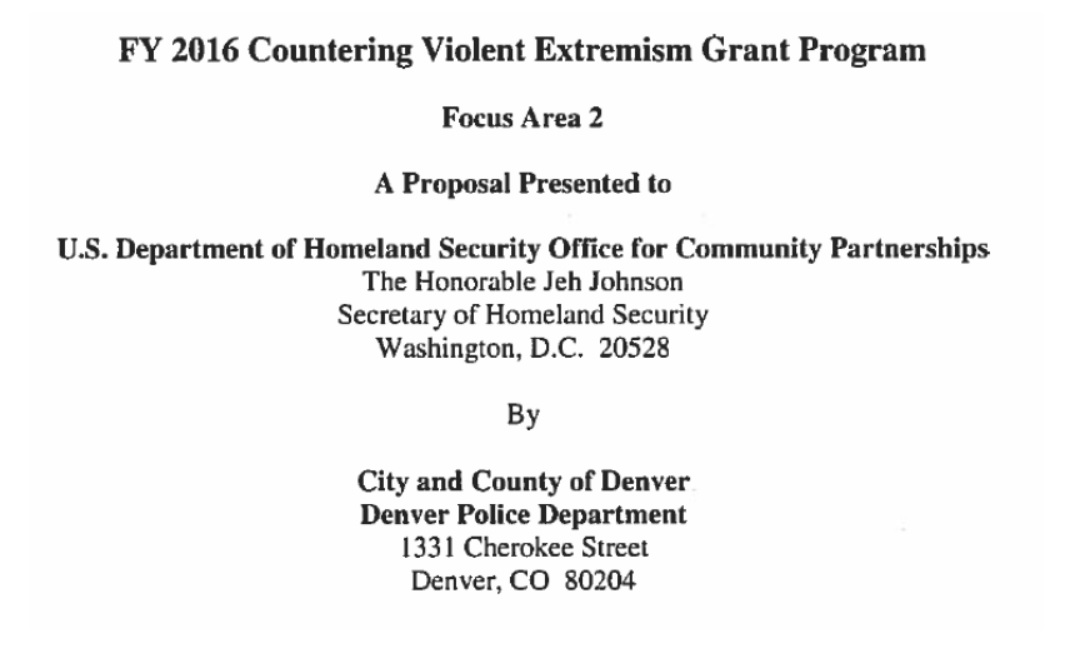 The proposal refers to Montgomery County’s CVE model (which has been rebranded as BRAVE) to stress the need for “community engagement and leadership” and “a multi-pronged approach to community-led identification and intervention strategies.”

Unlike the Montgomery County Model, however, DPD’s proposal contains few details on exactly how it will identify those vulnerable to violent extremism. This is a troubling omission since one of the major criticisms of CVE initiatives is that they inevitably rely on discredited science given the lack of any consistent indicators of violent extremism. Such reliance on shoddy methodologies has been a staple of virtually every CVE initiative, including the Montgomery County Model which DPD considers a standard to emulate.

These students have been “identified as at-risk by school counselors, teachers, community partners, and/or the criminal justice system” and suffer from “risk factors such as low bonding to family, school, and community, early/persistent behavior problems, academic failure, alienation/rebelliousness and association with delinquent peers.”

But it is never clear whether these students are “at-risk” of falling prey to violent extremism or at risk of dropping out of school, as at least one press release from Goodwill Industries suggests. Ironically, this only serves to highlight how meaningless such “risk factors” are given they can seamlessly apply to anything from violent extremism to academic failure.

When there is some specificity regarding “risk factors” of violent extremism, the proposal quickly collapses into absurdity. “Goodwill Industries,” reads one section, “has identified the transition from middle school to high school as one of the most dangerous for potential radicalization.”

Needless to say, such a view is dubious at best since there has been no spate of violent extremist attacks by middle school graduates.

The incorporation of CVE initiatives into youth mentoring programs, public health and anti-bullying initiatives, and social services is a disturbing national trend. The available evidence from the UK, where such strategies have been pursued for a decade, suggests that the programs erode trust between teachers and students as well as doctors and patients and lead to numerous human rights violations. Denver Police’s proposal lacks any serious discussion of these issues.

Perhaps the most worrying aspect of the proposal is the assumption that “the most at-risk population is one who is disenfranchised and not integrated into their communities.” Subsequently, the Denver Police Department argues, the task is to develop and implement a plan that aims at “integrating the at-risk population in the Denver Metro area into city life.”

But this assumption, a frequent feature of CVE initiatives, immediately leads to several problems. It stigmatizes already vulnerable populations as being “at-risk” of violent extremism. It effectively treats disenfranchisement as a “risk factor” of radicalization when such links are tenuous at best and nonexistent at worst.

Moreover, there is no reason why a law enforcement agency should be involved with integrating “at-risk” populations into the community or why integration should be premised on these populations being considered “at-risk” of violent extremism.

The populations identified in the proposal as disenfranchised and “at-risk” of violent extremism include refugee communities, which seem to be a priority for the DPD.

The proposal notes that the CVE initiative “aims to build resilience to ISIS and other violent extremist groups by facilitating integration of members of refugee and religious communities into Denver city life.” DPD will also collaborate with the Denver Office of Immigrant and Refugee Affairs (DOIRA) to develop a curriculum for immigrants and refugees. And the “CVE-specific mentoring” is to take place in schools located in “police districts with a large number of refugee students and lower than average graduation rates.”

Such a focus on refugees seems misplaced, to say the least, since refugees have carried out precisely zero terrorist attacks since 1980.

One of the core aspects of Denver’s CVE initiative is outreach to disenfranchised communities like Black Lives Matter by a program coordinator hired especially for this purpose. This coordinator is supposed to “bridge the gap between law enforcement and the community.” The “ideal candidate,” according to the proposal, will “already know the target community(ies) and possess political capital within the community(ies).”

This may be a difficult feat for the Denver Police Department given its long history of surveillance and intimidation of community organizers, activists, and protesters.

In 2003, for example, DPD released 1,500 pages of its Spy Files on peaceful protesters. The American Civil Liberties Union (ACLU) characterized the files as “the product of nearly five decades of intelligence-gathering” containing “more than 3,200 people and 208 organizations.”

A year later, DPD officers armed in SWAT gear were questioning an intern of the American Friends Service Committee (AFSC) along with the FBI “to gain general information.” The ACLU concluded that the DPD and FBI were “more interested in intimidation than in trying to gather information.”

More recently, when the DPD isn’t busy taking blankets away from homeless protesters or telling airport protesters they have no First Amendment rights, it has been deploying undercover “shadow teams” to infiltrate protests.

If the DPD is in fact interested in trying to “bridge the gap between law enforcement and the community,” it may be able to save the $114,982 it intends to spend on hiring a program coordinator by simply ending its surveillance and intimidation of activists. This would certainly be a more reasonable first step toward bridging the gap between, for example, Black Lives Matter and the DPD than describing the former as a disenfranchised community “at-risk” of violent extremism.

Not surprisingly, the local Denver chapter of Black Lives Matter was not too happy to have been included in a counter-terror proposal. “No policy was ever run by us for any kind of endorsement or feedback,” one member of the group said. “We did not work with, condone, or endorse anything to do with the Police Department.”

Despite claims that CVE initiatives are not led by law enforcement agencies, Denver’s plan is to be spearheaded by a police department receiving funds through the Department of Homeland Security.

It does, however, differ from other CVE initiatives in broadening the focus from Muslims to “disenfranchised communities.” Refugees (many of which will doubtlessly be Muslims), LGBTQ communities, and Black Lives Matter are to become “targets” for law enforcement outreach. There is no evidence that these communities pose unique violent extremist threats.

The plan also relies on the same discredited science as programs in other cities. That such reliance has become routine in CVE initiatives underscores the extent to which it is an evidence-free strategy incapable of establishing any links between the means it deploys and the ends it hopes to achieve. At the same time, it succeeds in the stigmatization of Muslims (and other disenfranchised communities in the case of Denver’s initiative) and the curtailment of dissent and political activity through its hunt for fictional “risk factors” of violent extremism.

You can read DPD’s grant proposal below or on the request page.

Waqas Mirza sent this request to the Denver Police Department of Denver, CO