When an FBI file opens with a paragraph that describes the case “a most complex case involving foreign intrigue, murder and the highest echelons of the Vatican,” then you know have something interesting. That was just how the file for Banco Ambrosiano began. 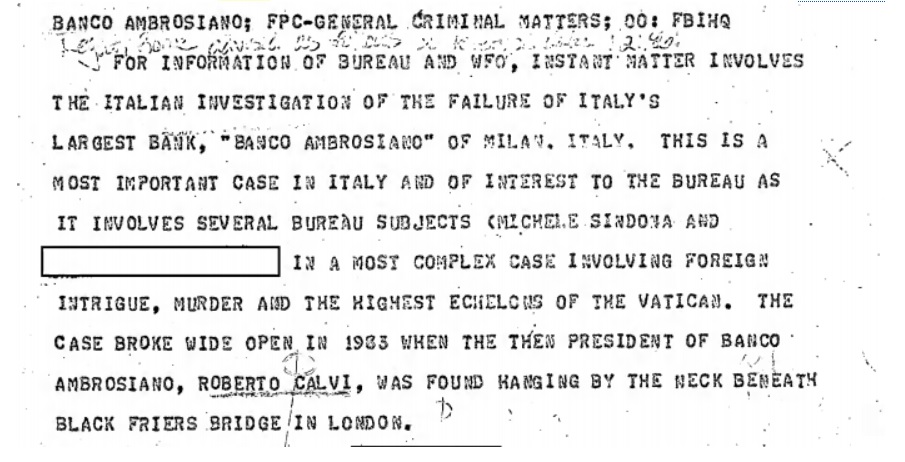 While the release consisted of only a single two page document, it was confirmation that the Bureau’s interest in the case had existed. Other FOIA requests on the case had already been filed, including several on individuals who’d been associated with the somewhat infamous case. One, for Paul Marcinkus, came back empty. Marcinkus had been an archbishop and served as President of the Vatican Bank from 1971 to 1989, allegedly becoming involved in the Banco Ambrosiano scandal and several associated money laundering and organized crime cases.

Three other requests on the case remained pending, however. One, for Licio Gelli, has returned a partial set of documents which will be explored elsewhere. Another, for Michele Sindona’s FBI file, turned up 13,000 pages, which are forthcoming. The third request, for Roberto Calvi, recently received an initial response from the FBI (an appeal has been filed to receive more than the preprocessed records initially offered). While Marcinkus ran the Vatican bank, it was Roberto Calvi who became known as “God’s Banker.” Unsurprisingly, the partial file released shows direct overlap with the Banco Ambrosiano file due to his serving as the bank’s Chairman.

The FBI’s interest in Roberto Calvi seemed to begin in June of 1981 with an AIRTEL from Rome. The AIRTEL, labelled “LA COSA NOSTRA,” left the FBI with the impression that “he might be a key to the growing interest in international money laundering.”

The FBI followed up on its interest of Calvi, and found out in 1982 that he had been convicted for financial crimes. The memo concluded that the Bureau’s Rome office would continue to look for links between Calvi and organized crime. 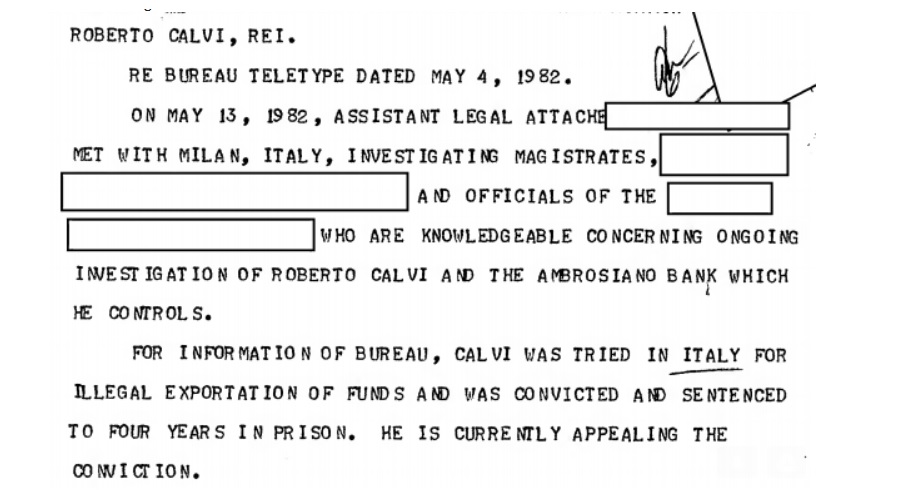 The next month, the FBI was advised of something that remains redacted, but left the Bureau with a request to close the investigation. The most likely cause was Calvi’s death, which had occurred a month earlier. 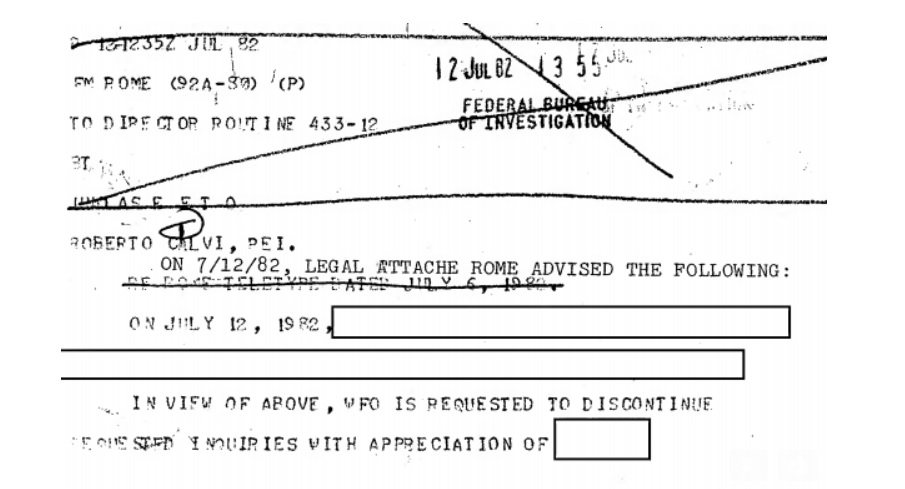 A memo issued soon after went into additional details. According to the memo, Calvi had been “found dead in the Thames River.” This was arguably true, but misleading. In reality, Calvi had been found hanging from the Black Friar’s Bridge above the Thames. Based on this information, the Bureau put forward two theories - he had either been killed or committed suicide. 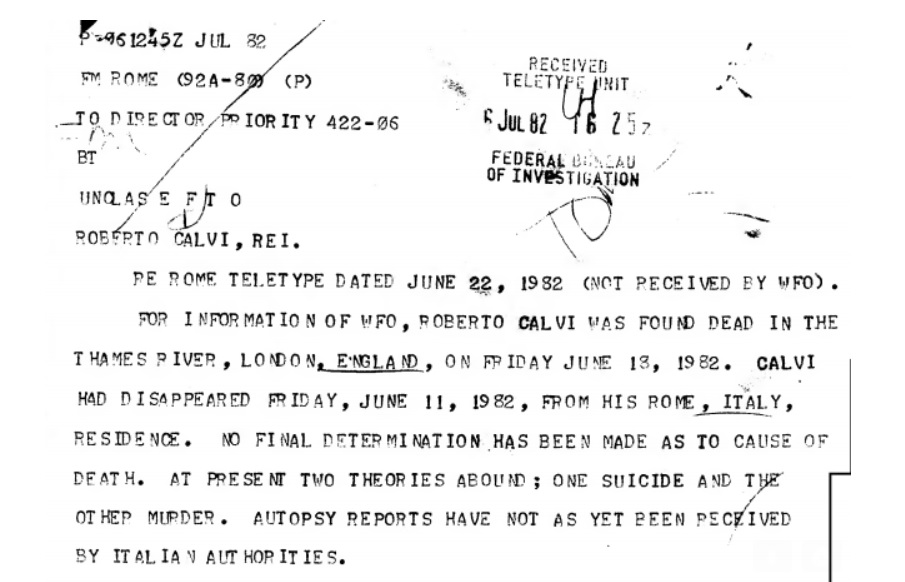 According to the FBI memo, six days after Roberto Calvi disappeared, one day before his body was found and on the same day Calvi died, his secretary “was killed when she fell out of her window. Speculation is that she committed suicide.” The Bureau acknowledged that the coincidental timing seemed strange to the media, and had resulted in a great deal of interest. The Bureau’s only apparent interest, however, was in looking for connections between Calvi and money laundering for organized crime, and so the memo committed to looking for any mafia or ‘La Cosa Nostra’ “interest”.

The next update that the Bureau got was probably stranger than anything they expected, with phrases like “Vatican Bank” and “secret Masonic Lodge.”

In a memo written to an unnamed Judge - who was almost certainly Judge William Webster, the then Director of the FBI who was often addressed by the honorific “Judge” - the Bureau responds to questions generated by an article in The New York Times. In doing so, the memo summarizes a story that manages to link the Vatican Bank to elements of organized crime as well as to a secret Masonic Lodge that became embroiled in a political and intelligence scandal that effectively created a shadow government in Italy. According to the *Times, Banco Ambrosiano had lost up to $1.4 billion, and the Vatican Bank had some “potential associated liabilities.” This would be one of the tamest parts of the memo.

The memo continued by stating the Bureau had previously been informed that Calvi had been arrested “on charges brought by the Italian Finance Police of illegally transferring funds abroad.” According to the memo, Calvi had been a member of the Christian Democratic Party (which had in turn been secretly supported by CIA), and had “been linked by Italian Investigators to the Italian P-2 scandal (referring to the latest failure of the Italian Government attributed to a secret Masonic Lodge, the Propaganda-2).” Propaganda-2 (AKA Propaganda Due) had been linked to a shadow government in Italy. Licio Gelli’s links to Propaganda-2 will be explored in another article.

The memo went on to recount Michele Sindona’s conviction on 65 counts of fraud relating to Franklin National Bank, which was also tied to the Vatican banking scandal. Sindona’s story will be explored after his file is released.

The memo goes on to contradict the FBI’s “no records” response regarding Archbiship Marcinkus, as it describes the Bureau’s interest in and interview with him. In the interview, Marcinkus denied any knowledge of fraudulent financial deals and the $950 million counterfeit bond deal. Marcinkus confirmed his relationship with Sindona, which means that the release of the latter’s file may reveal more information about Marcinkus and the Bureau’s interview with him.

The memo concludes by noting that a confidential police report told them something which remains redacted, and that they had been unable to validate the Times’ report.

Subsequent investigations in Italy were carried out, and the findings (in Italian) have been made public. For the Bureau, however, the interest in secret Masonic Lodges and the Vatican Bank was incidental to relatively local organized crime cases.

Read the file for Banco Ambrosiano is embedded below, or on the request page.