President Donald Trump’s tough-on-immigration agenda has been a boon for the for-profit detention industry, which months ago was facing lost government contracts and waves of negative press. This administration’s insistence on a zero-tolerance illegal immigrant policy, which aspires to undo some, if not all, of President Obama’s Executive Orders, has helped prison stocks return to levels comparable with prices of mid-August, when the DOJ announced it would move to phase out its use of private prisons at the Bureau of Prisons. 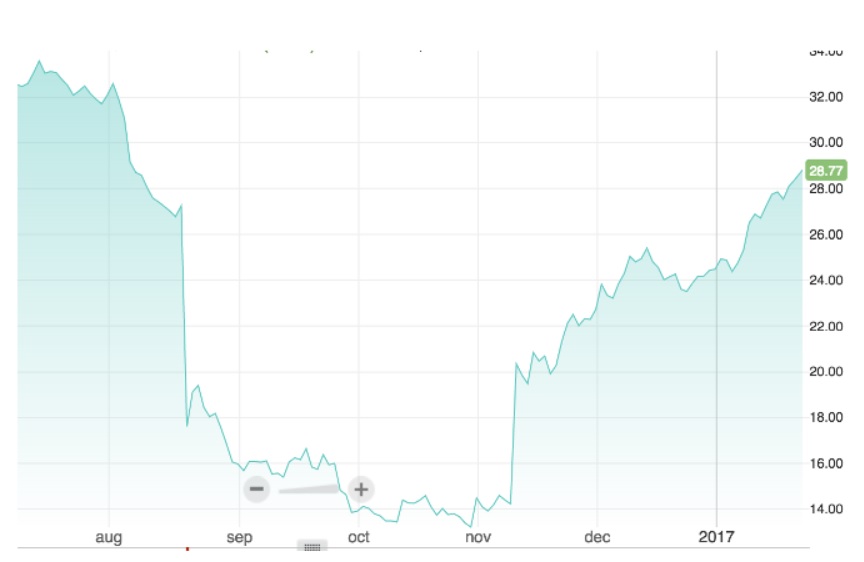 “We are going to triple the number of ICE deportation officers,” Trump told a crowd in Phoenix, Ariz. at the end of August. “Within ICE, I am going to create a new special Deportation Task Force, focused on identifying and removing quickly the most dangerous criminal illegal immigrants in America who have evaded justice.”

ICE currently holds nearly two-thirds of its 34,000 person detainee population in facilities owned and/or managed by CoreCivic (formerly Corrections Corporation of America), GEO Group, and other private prison companies. The rest are held in a network of locations, over 600 in total, through similar, temporary agreements with local and state law enforcement, like AirBnB for prison cells, meaning there’s incentive smeared throughout the detention system. With an estimated 11 million undocumented immigrants living in the U.S., a full crackdown would mean a lot of funding for the agency. By the end of September, the union of ICE employees had endorsed Trump.

The population of immigrant detainees may be more heterogeneous than typical offender populations, and each individual carries a higher price tag in an ICE facility, with per diem detention rates approaching $100 a person a day.

Arizona, a state that shares a 370-mile long border with Mexico, is one of the toughest on those living within the country without legal permission. It’s long pushed laws tough on criminals, citizen and otherwise, implementing legislation like House Bill 2451, requiring unauthorized aliens to serve 85 percent of their time for crimes before deportation and Senate Bill 1070, a controversial law requiring constant documentation of legal status, penned by Kris Kobach, now with the Trump administration.

Arizona - like its fellow border states California, Texas, and New Mexico - also actively employs privately-run facilities, and sometimes stand to receive a kickback, even when the facility isn’t in that state.

“[I]gnore short-term noise. With the political uncertainty, Brexit, contentious elections, things going on in some Western democracies, the temptation to act on that is great. But our experience is: Don’t,” Vanguard CEO Bill McNabb recently cautioned in an interview. “Short-term timing and trading (with mutual funds) around issues does not work. It’s important to tune out the noise and stick with your long-term investment plan.”

His investment firm, which specializes in index funds, owns a majority of both CoreCivic and GEO Group. If private prisons do well, so will they. Three months later the panic of that announcement is receding in the rear view mirror.

Even action like Trump’s federal hiring freeze could bypass ICE and other agencies like CBP, USCIS, and US Marshals under an exemption for national security and public safety, leaving very little to suggest that private prison companies won’t stand to make something off of any quick mass detention and deportations efforts.

The same elements that make prisons appealing have always been at play are there - quick turnaround, jobs for local residents, kickbacks to the host town.

Though not everyone is buying in, with federal-level calls to lock up members of the local immigrant community, ICE enforcement working in all fifty states means local law enforcement across the nation could get a monied boost.

With a lot of money swirling around detention, MuckRock will keep following the paper trail of for-profit detention.