One of the tactics used by North Dakota Governor Jack Dalrymple to try and quell the #NoDAPL protests at Standing Rock was the Emergency Management Assistance Compact or EMAC. EMAC, which was originally intended for inter-state cooperation in the case of natural disasters and terrorism, has been increasingly used to combat protests such as in Baltimore and Cleveland, and in this case allowed almost 40 police departments and sheriff’s offices to flock to Morton County, ND and participate in crowd control.

A batch of emails that we have received from the Wyoming Highway Patrol in response to our request about their EMAC documents, has helped shed some light on how law enforcement views the EMAC and the Standing Rock protests. It seems from the emails that the WHP and other police departments viewed the protest as a valuable chance to learn how to control large scale direct actions by protesters.

In an email from Tom Butler, a colonel with the Montana Highway Patrol, he explains to numerous colonels from around the country, that many states in the west have similar demographics and resource make up as North Dakota, and they should expect similar situations cropping up in their own states in the next few years.

Butler encourages other PDs to go to the protest and participate, saying that the protests marked an educational opportunity to learn how to control large protests and “to allow our agencies to continue working together in the future as they move up through the ranks.”

It seems that WHP agreed with this assessment of the protests. In an email directly citing Colonel Butler’s email, WHP Major Perry Jones planned to send a two man team to Morton County in order to learn about the massive tactical and administrative planning that went into coordinating such an extensive law enforcement action. 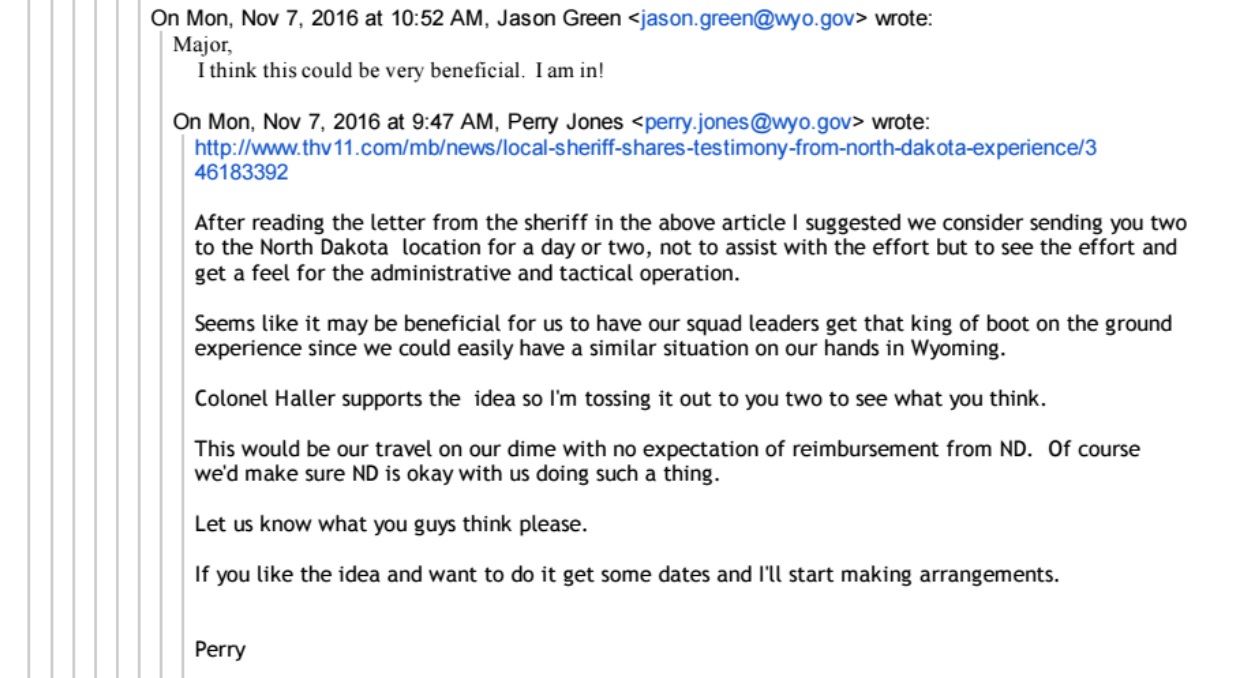 When that team got back a little over a week later, a trooper, whose name was redacted, sent to his superiors a lengthy list of recommendations he had gained from studying the police response to the protest. 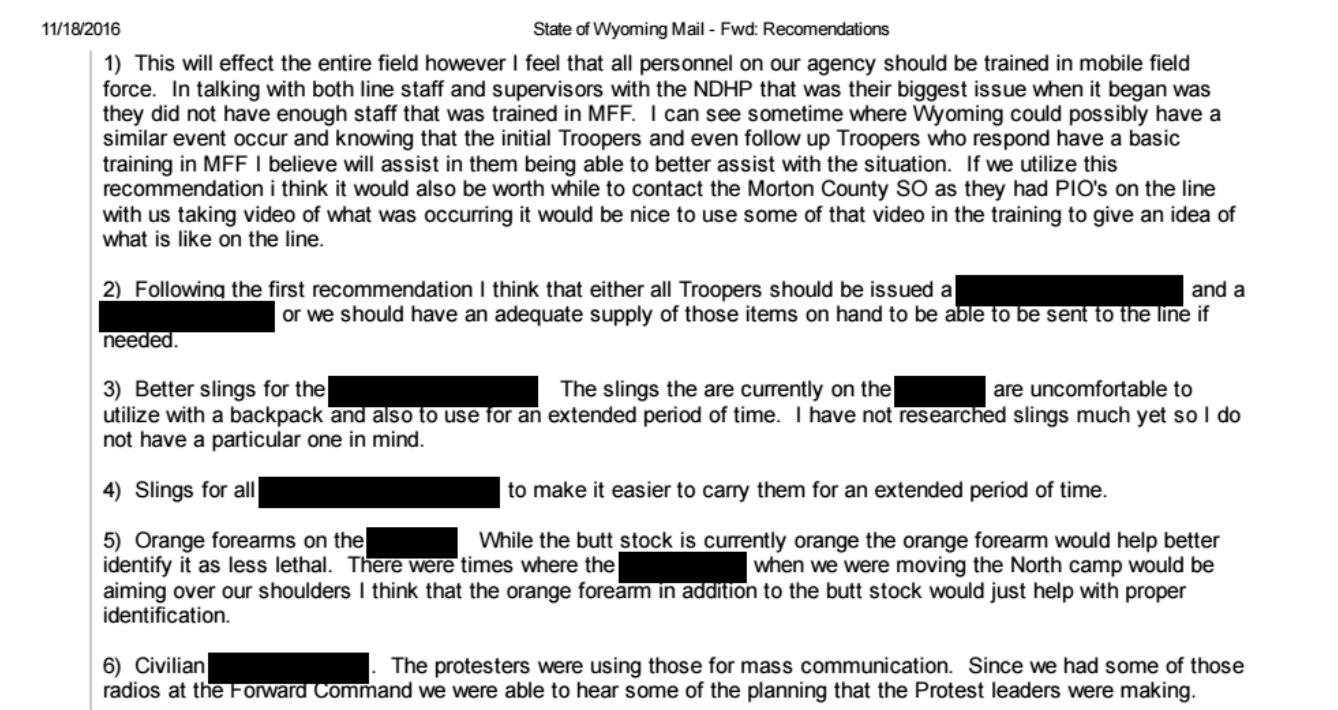 Two notable takeaways are his recommendation that all officers in the WHP should be trained in mobile field force - which is another way of saying riot police - and that orange colored forearms be used to make whatever redacted less lethal equipment being used look less lethal. 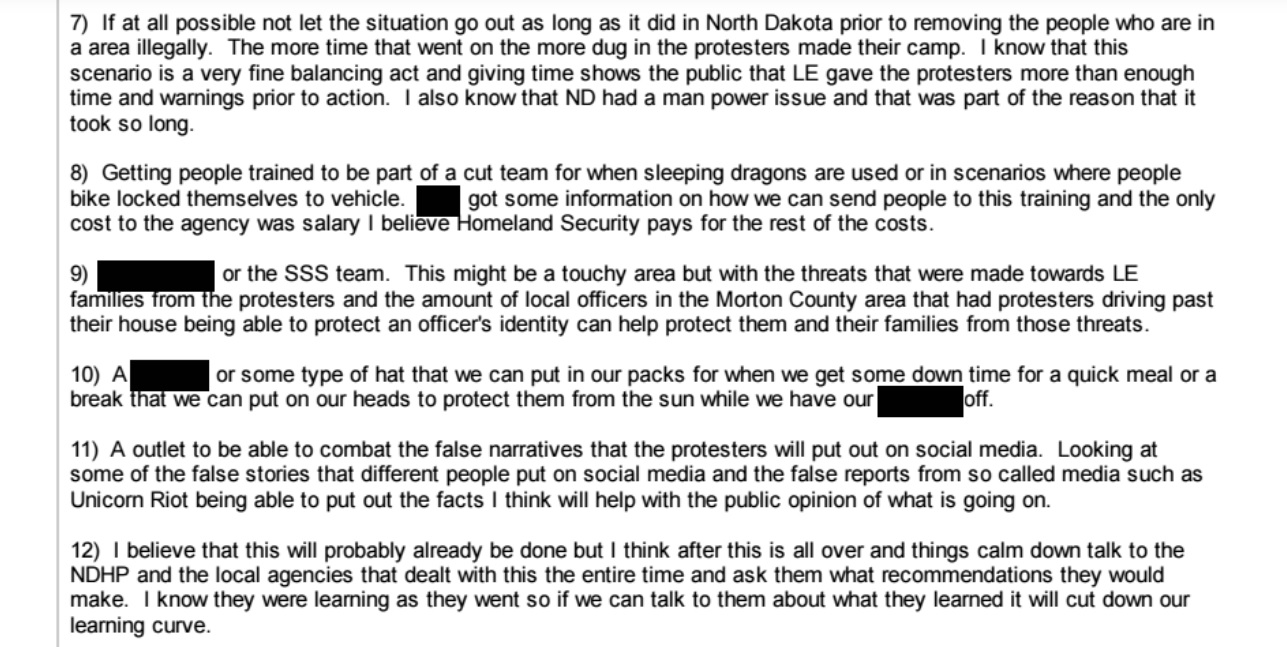 Also mentioned were removing the protesters earlier before they dug in, developing counters to protester maneuvers like the sleeping dragon, listening in on protest leaders, and using an outlet to combat news reports unfavorable to police. Or in his words, “so called media such as Unicorn Riot.”

The EMAC emails have been embedded below, and check out the documents and see for yourself how law enforcement was using the Standing Rock protests to learn how to more effectively clamp down on civilian protest actions. In the meantime, we will be following up with the WHP to try and obtain their unredacted list of the equipment they brought to North Dakota.