A black man successfully brandishing a pen was cause enough for alarm in Hoover’s FBI. Hundreds of pages released in response to a request by MuckRock user Conor Skelding sketch the Feds attempts to keep track of African-American novelist James Baldwin, capturing soundbites from the stir of sixties’ Civil Rights Movement that continue to resonate today.

In a game of mid-century FBIngo, James Baldwin instantly checked a whole row of boxes: black, gay, critical of the government in general and Mr. Hoover in particular, and a socialist sympathizer.

For years, from around the time he first met with Attorney General Robert F. Kennedy …

through his trips abroad to London, Paris, and Turkey, even well into the seventies, the boys in black kept tabs on Mr. Baldwin. Who, no matter his location within or outside the country, was a danger to the American way of life.

The great threat he posed? As far as the Fed were concerned, it was his ability to articulate, in his words and his speech, an American experience that appeared unfamiliar and dangerous, and while, though resonating for thousands …

remained perplexing to the establishment, like longtime Hoover friend, William F. Buckley, whose clips are included.

Included in his file are also letters from the public, showing a one-sided Southern concern that Baldwin may be a threat and that Hoover might not be around to provide security.

In a number of instances, the FBI called his home in order to obtain confirmation of his address or whereabouts.

However, not all of their intelligence could be deemed entirely reliable. In 1967, someone posing as “Mrs. James Arthur Baldwin” claimed that the was in London … 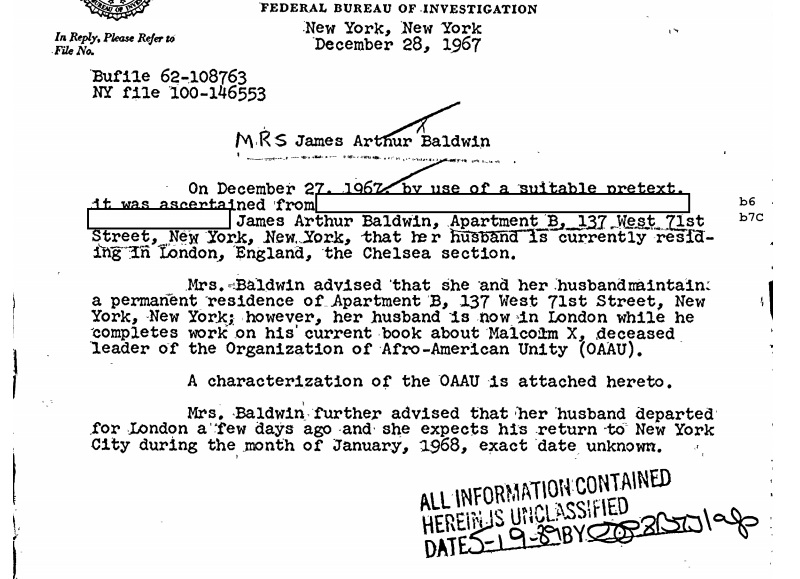 And while his location may have been accurate, any purported spouse was not.

The file is hundreds of pages long. Take a look, or better yet, pick up some of Baldwin’s reading material for yourself - the FBI eventually did. 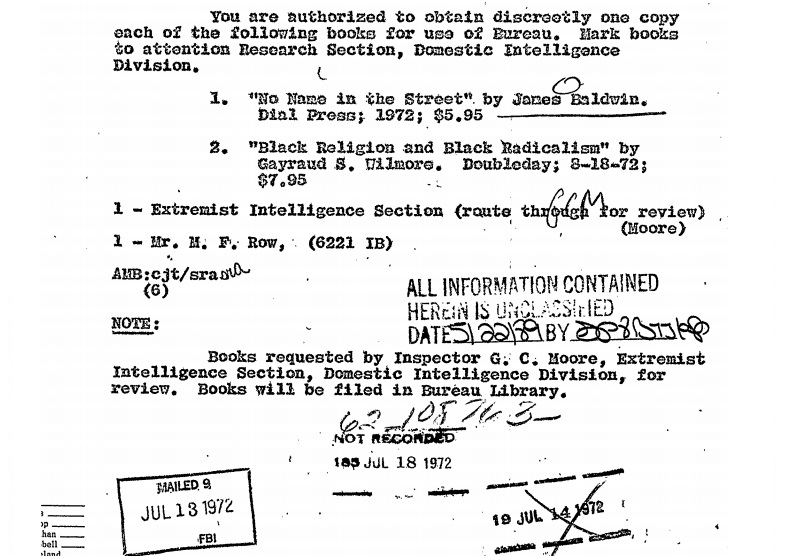 The first file is embedded below, and you can read the rest on the request page.

Image by Allan Warren via Wikimedia Commons and is licensed under CC BY-SA 3.0