As a staunch anti-communist, novelist Ayn Rand was no stranger to J. Edgar Hoover’s Federal Bureau of Investigation. Files recently released to Emma Best date back as early as 1947, where we find this rather charming review of Rand’s first literary hit.

In fact, Rand appears to have been in not infrequent correspondence with the Bureau, sending clippings concerning books she suspected of engendering communist beliefs …

such as this bargain-basement knock-off of Animal Farm.

Also included were negative reviews of her own works, because as everyone knows, being anti-anti-communist is the same as being pro-communist.

However, after an article came out in the Saturday Evening Post in which Hoover described himself as an “objectivist,” Rand wanted to take her relationship with the Bureau to the next level. She wrote the Director, asking if this was a reference to her personal philosophy of Objectivism, and if they could meet to “discuss a personal political problem.” 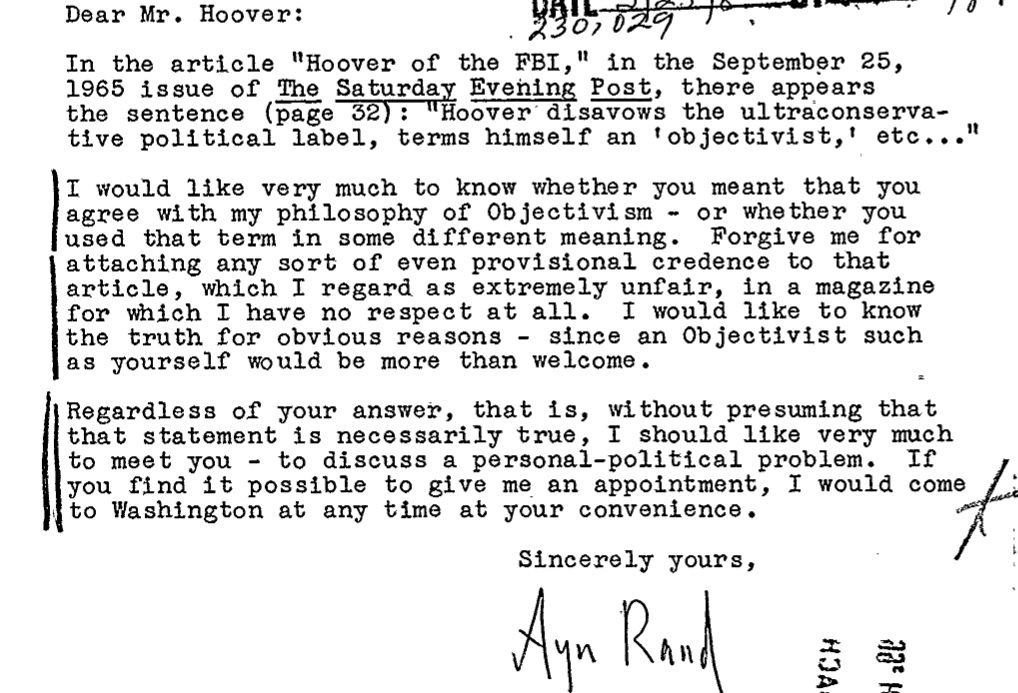 An inquiry was immediately launched - what had Hoover actually said? What is objectivism, anyway? Should the Director meet with Rand?

In regards to the first question, a clipping of the article in question showed that the Director had described himself as “objectivist,” but he had simply meant it as a reference to his self-avowed apoliticism. 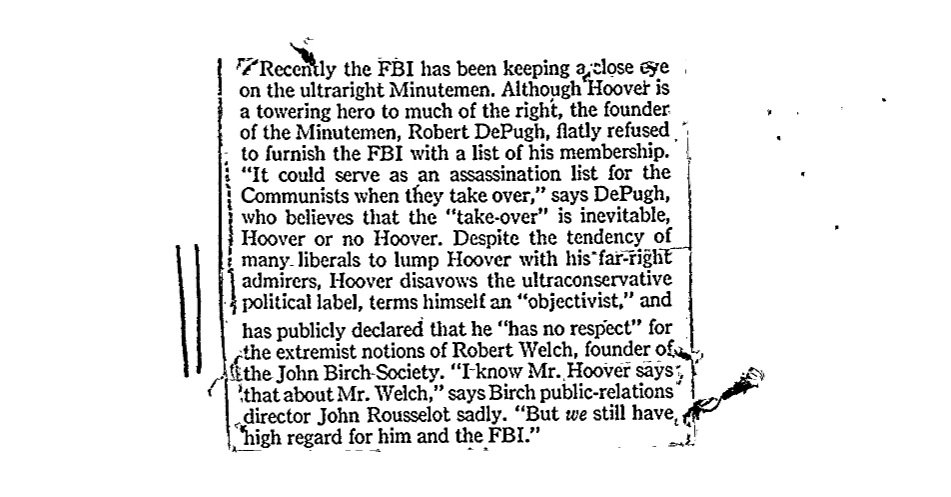 As for Objectivism, nobody at the Bureau had any clue - though they do note that the publisher Bennett Cerf, one of the founders of Random House, had given Hoover a (presumably unread) copy of Atlas Shrugged.

Though Rand disdained enough of the right people to pass the FBI’s sniff test, it was ultimately determined that she was insufficiently important for the Director to meet her.

As some consolation, neither was Elvis.

Hoover wrote back to Rand, clarifying his views, and while he couldn’t commit to an appointment, he’d be happy to chat if she dropped by when he was around. 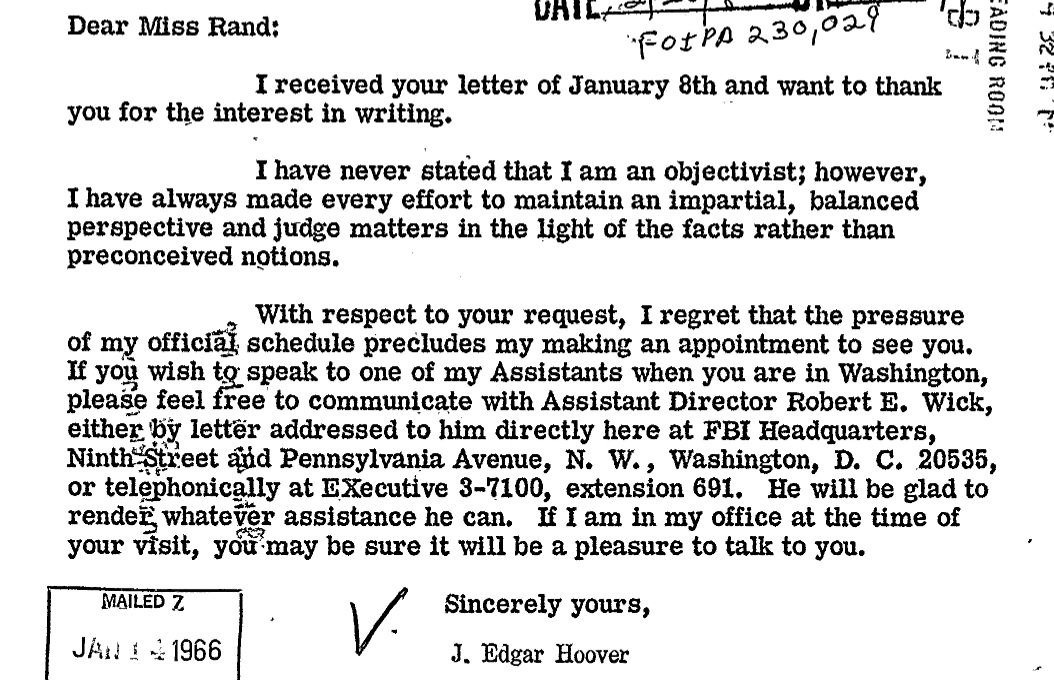 That was the last formal communication between Rand and the Director, though a few years later the Bureau did investigate a series of harassing letters from a man who saw himself as the successor to Rand’s Objectivist legacy. Hoover’s attitude towards Rand is perhaps best summed up by his reaction to an unsolicited copy of Rand’s For the New Intellectual received from an anonymous contact. 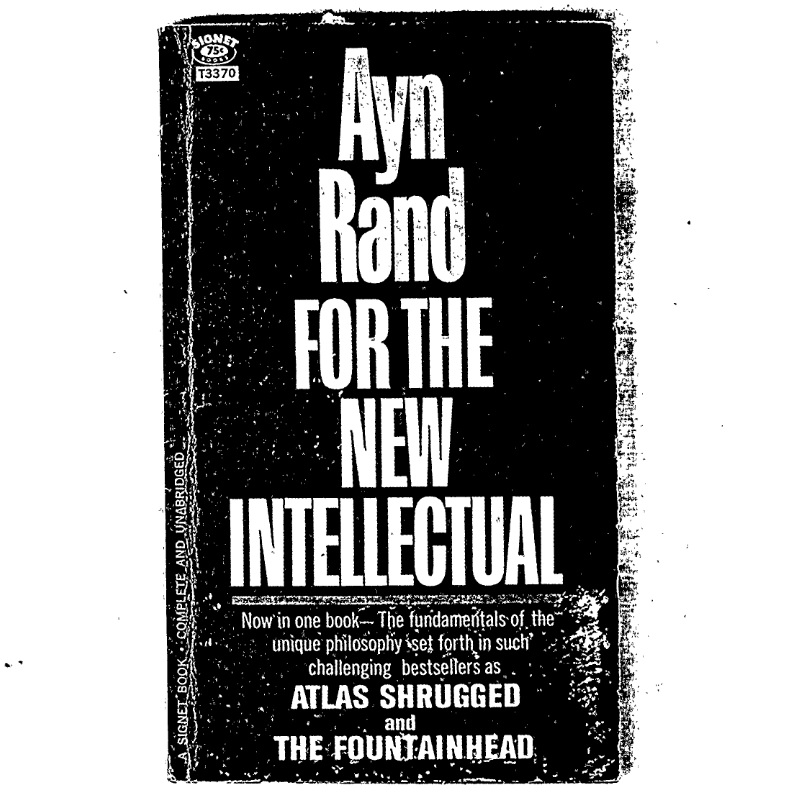 That copy ended up in Rand’s own file - presumably never having been read.

Read the file embedded below or on the request page.