John Edgar Hoover, infamous “Number One G-Man,” headed up the nation’s largest domestic law enforcement agency as director of the Federal Bureau of Investigation, until his death, this day 44 years ago on May 2, 1972. That same day, the FBI file on the man himself became fair FOIA game.

In the span of his nearly half-a-century-long tenure, J. Edgar Hoover’s name became synonymous with an organization oft-criticized for its aggressive surveillance of first amendment activities, and it is still emblazoned on the FBI’s building in Washington, D.C., just three miles from the home in which he was born.

Unsurprisingly, the man who amassed thousands of files on journalists, protesters, Congressman, and so many others has his own files, thousands of pages long, now living on the FBI’s vault and MuckRock - still more are held by NARA.

The early years, as covered by the release, paint the picture of Hoover as well-respected, well-disciplined law enforcement ally with a quick rise to the top of the Bureau and many supporters amongst local and international law enforcement. It’s a personnel file, so it captures more highlights than criticisms - only one letter from this period throws any heat at Hoover.

The earliest materials are of his World War I time organizing confidential informants and suspicious German actors.

… through his appointment as Assistant Director… 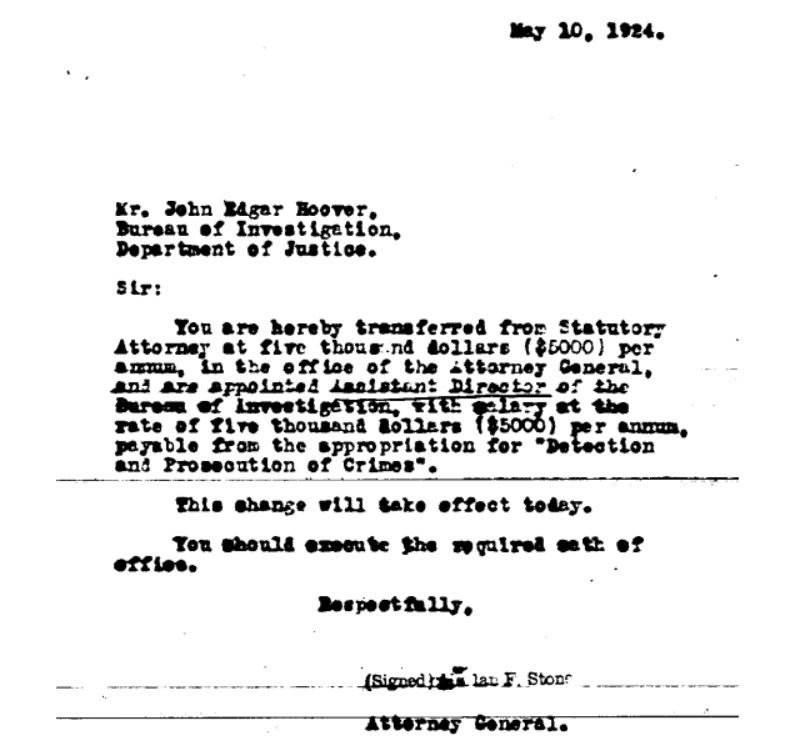 …and then Acting Director…

…and then director of the Bureau of Investigation. 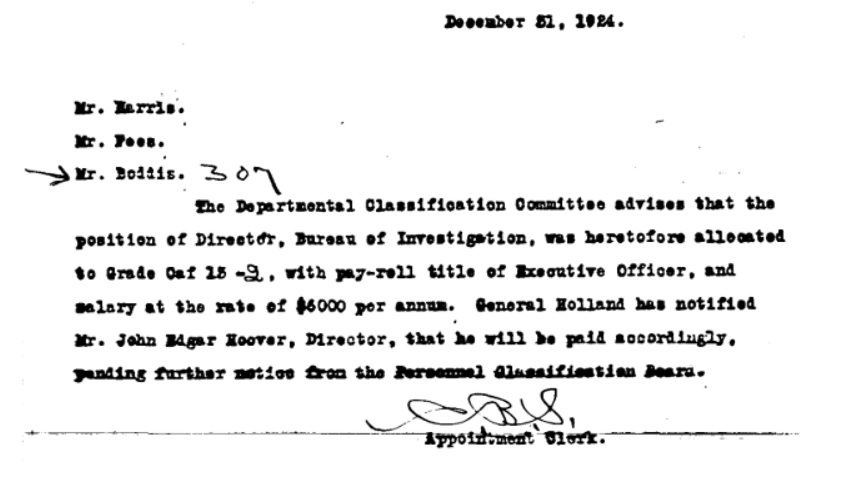 There are multiple mentions are made about particular pay raises, specifically, a 1935 Congressionally-approved raise that brought Hoover’s annual salary to $10,000, something like $175,000 today. Clippings and compliments accompany the news of the new pay rate, with multiple letters of congratulations on the well-earned extra dough. 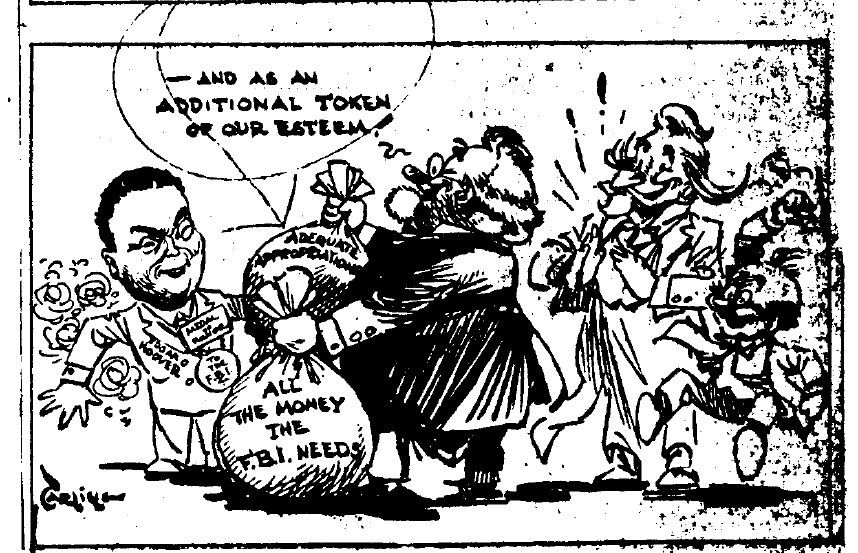 It also contains a lot of praise for the man, and his personal responses to his most notable wellwishers and international recognition.

To read Hoover’s file for a sense of the man, of course, is like trying to scan an honor student’s report card for some indication of his character. On paper, his peers are respectful, even admiring.

Even from unexpected sources, such as this (sadly, nearly illegible) apology from the American Civil Liberties Union. 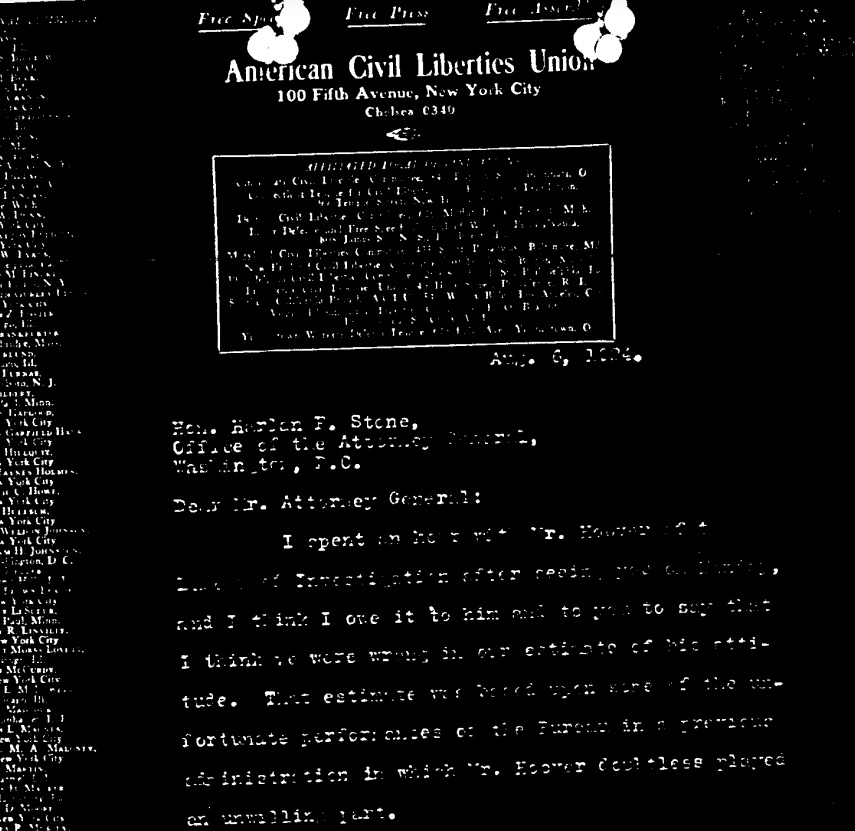 In 1929, the International Association of the Chiefs of Police awarded him their “unqualified support.”

Which was followed by high recognition in Romania …

a medal, which presumably Hoover never got back …

and another letter requesting he be the recipient of Mexico’s Aztec Eagle.

There were also perks, like the Canzoneri-Klick boxing tickets he was able to get from Robert P. Smith, who was with the Shriners Almas Temple.

Under his watchful eye, the FBI database of fingerprints and files ballooned, and his early affinity for meticulous scrutiny earned him the President’s Medal of Merit after World War Two, when suspicious activities by German and Japanese sympathizers were the latest concern. 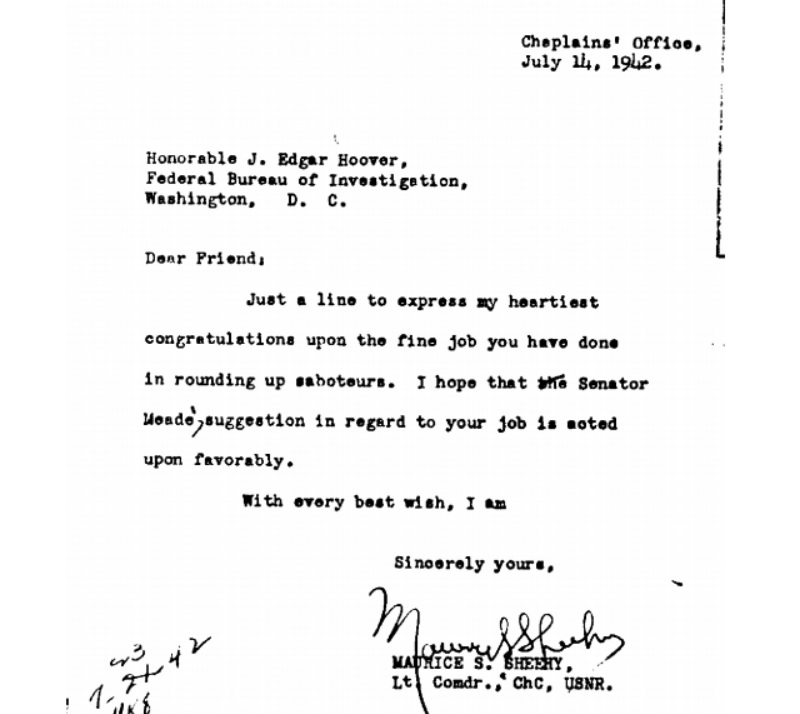 The man whose reign was spent targeting fringe political actors and activists held no real political affiliations himself.

Read the first installment of Hoover’s file embedded below, or on the request page: