Ayn Rand had a competitor for status as the most dizzyingly incoherent and morally questionable writer of the 20th century: her stalker.

FBI files released to Emma Best show that the unnamed man sent Rand dozens mommy issue-riddled letters over the course of the late ’60s, some making threats on her life.

The man was obsessed with Rand’s Objectivist brand of libertarianism and saw himself as her intellectual successor.

While Rand received the bulk of his correspondence, he also directed letters to then-President Richard Nixon, Senator Ted Kennedy, the CEO of Time Inc., a prominent Canadian forester, and a U.S. Attorney working on his investigation.

His late ’00s Reddit political convictions combined with latent homicidal tendencies and a dash of early ’10s Reddit sexual frustration manifested in a searing hatred for the political establishment, which he viewed as an illegitimate authority. Letters addressed specifically to Nixon are not included in the file, but a letter to Kennedy is politely described by the Bureau as “rambling in nature,” and gives some insight into the man’s approach to political discourse. 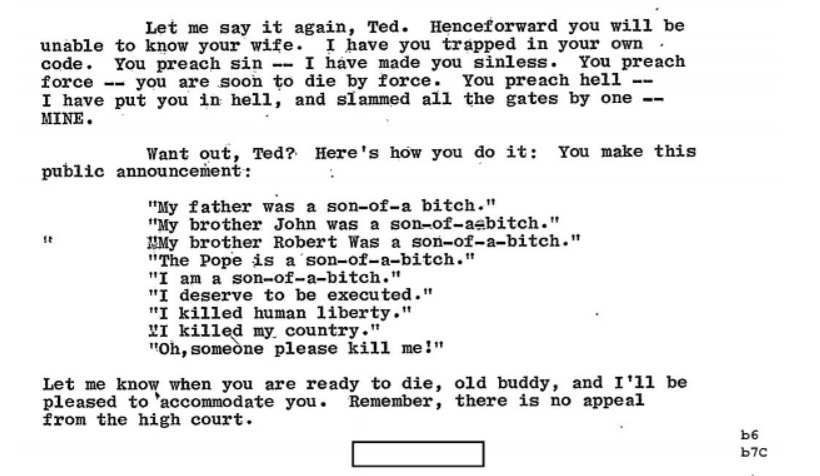 He was apparently no fan of the media either. In a letter to Andrew Heiskell, CEO of Time, Inc., predicting the death of Rand and a seemingly unrelated Canadian public figure, he warned against the “two-bit witty sarcasm [Time] writers use to amuse the masses,” and threatened to kill Heiskell and destroy Time, Inc.

He did, however, grace Heiskell with some erotically-charged thoughts about a anthropomorphized Liberty in another letter.

In the course of the Bureau’s investigations into his threatening letters, the man was interviewed by special agents on multiple occasions. He always maintained that he meant nobody immediate physical harm, but threw in some ideas perhaps best kept private when in the company of FBI agents.

In keeping with his trend of oversharing, he wrote the FBI in late 1969, inviting them to come after him because he had purchased a gun and not paid taxes on it, adding that he wanted to use the weapon. The Bureau of Alcohol, Tobacco, and Firearms was advised to seize the gun and arrest the man if he resisted, but the results of this confrontation are not included in the file.

In January 1970, U.S. Attorney Nathan Graham, whom the writer had called “a complete, immoral, unethical, incompetent, rotten swine who has never produced one thing of value to civilization,” advised no further investigation was desired by the FBI, and the 152 page file ends abruptly after a heavily redacted finale.

Read the full embedded below, or on the request page.

Image via Philosophy of Science