While it is generally believed the Obama administration outlawed torture by executive order in January 2009, the ban was not total. According to the UN committee that reports on country compliance with the UN treaty, the U.S. Army Field Manual (AFM) on interrogation uses techniques that constitute “ill-treatment” and raise concerns about the use of torture.

The AFM describes 19 interrogation procedures used by the military and the CIA. Though the U.S. is a signatory to the UN treaty against torture, Human rights groups and journalists pointed to the presence of these abusive interrogation techniques in the current AFM, whose latest incarnation dates to September 2006.

Apparently, someone at the Department of Defense (DoD) felt compelled to answer these charges.

As a result of a FOIA filed by this author, the Office of the Secretary of Defense (OSD) has released a set of talking points the DoD used to explain the AFM interrogation technique called “Separation,” in the specific context of Geneva Convention prohibitions against the use of cruel, humiliating, and degrading treatment of prisoners.

The release of the talking points, which are undated, and two other associated 2007 DoD memos, was in response to a request for “all materials involved in the review of ‘activities’ surrounding the use of Army Field Manual 2-22.3’s (AFM) restricted “Separation” technique, as described in the AFM’s Appendix M.” Unfortunately, OSD did not actually release any documents related to this review. It seems likely that documents related to any such review were part of “approximately 67 pages” withheld as “classified national security information,” as explained in a March 17 letter.

I intend to appeal this decision to withhold the bulk of the relevant material to this FOIA.

The use of torture and ill-treatment goes against the restrictions of Common Article 3 of the Geneva Conventions. Transgressions against Common Article 3 are relevant in this context because the U.S. has reserved the use of Appendix M’s “Separation” technique – which also includes the use of solitary confinement for periods of up to 30 days, or longer if approved by a relevant DoD official – for use on “unlawful enemy combatants.” Isolation was the one technique mentioned by name in Guantanamo’s Standard Operations Procedures. 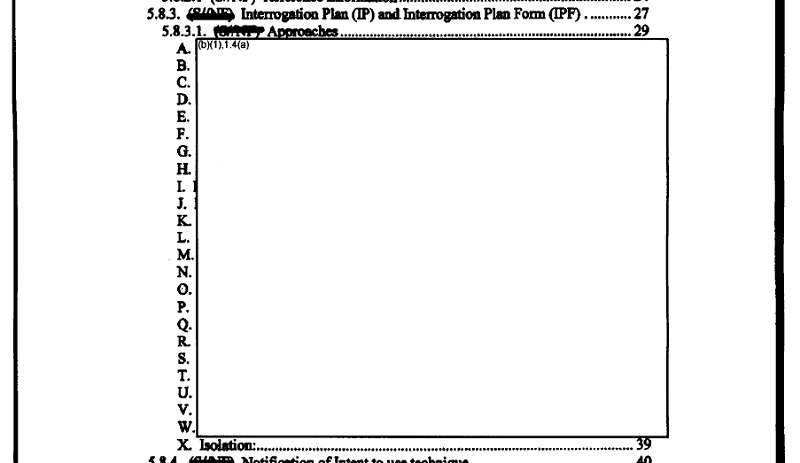 “Separation” cannot be used on enemy prisoners of war, who have more robust Geneva treaty protections (as the DoD Talking Points make clear) against threats, insults, or exposure to “any unpleasant or disadvantageous treatment of any kind.”

The memo notes that solitary confinement does not fit the criteria of cruel and unusual punishment, “as it is a technique used extensively in US prisons and does not ‘shock the conscience’,” and moreover has been the subject of “numerous legal reviews.”

Yet the use of isolation in US prisons is currently under heavy criticism for the terrible psychiatric and emotional damage it causes prisoners - in February 2014, the damage caused by this practice was the subject of congressional hearings. Additionally, the DoD never refers to the aspects of Appendix M that allow for restricting sleep to a maximum of four hours per day for 30 days or longer, or using a form of sensory deprivation that can cause psychosis.

One legal review of Appendix M – and the only such legal review that has apparently ever been released publicly – was undertaken by Stephen Bradbury, the author of the 2005 torture memos used by the Bush administration to justify the use of waterboarding and other techniques of the CIA’s “enhanced interrogation” torture program.

Bradbury’s memo-review “for the files,” undertaken when he was Acting Assistant Attorney General, was dated September 13, 2006. His approval of Appendix M was never withdrawn by the Obama administration. Most commentators have ignored the fact that Obama’s January 2009 executive order, “Ensuring Lawful Interrogations,” indicated that the Bush-era memos on interrogation and torture would be withdrawn only after review by the Attorney General, and not in a blanket fashion.

So thanks to the executive order loophole, the Bradbury memo on Appendix M was never rescinded. In his memo, Bradbury made a point of stating that some of the techniques used in the Army Field Manual wouldn’t pass muster “if they were permitted in interrogation of all DoD detainees, regardless of their combatant status and without regard to the level of intelligence they might possess” [italics in original].

The second part of the “talking points” takes up Bradbury’s caveat, announcing “Separation may not be used on EPWs [Enemy Prisoners of War]” due to a number of Geneva regulations, including Articles 17, 21, and 22.

According to these protections, POWs cannot be “threatened, insulted or exposed to any unpleasant or disadvantageous treatment of any kind.” They cannot be held in “close confinement” to a cell or single room. Nor can they be separated from other prisoners from the same forces. Under the AFM’s provisions, a subset of prisoners has been removed from such protections: the “detainees” captured in the “war on terror.”

The policy of removing prisoners from the military actions against Al Qaeda and the Taliban from the protections of the Geneva Conventions pertaining to POW protections was hammered out in a series of memos by Bush Administration figures beginning in January 2002. This policy of the Bush administration has been followed by the Obama administration as well.

DoD has been careful to keep those protected from Geneva-defined abuse from those who they say are not. In a separate document in the same FOIA release as the “talking points,” a September 2007 memo from then Under Secretary of Defense for Intelligence, James Clapper, Jr., to the DoD General Counsel and the directors of a number of DoD intelligence components, Clapper explained that, first of all, “Separation” is not the same as the administrative segregation of prisoners for security purposes.

It follows that when the protections of the Geneva Conventions for prisoners are removed, questions of maltreatment and torture arise. The potential for serious harm by use of Appendix M techniques is something brought up in the Army Field Manual itself more than once. “Separation” interrogations require the “presence of qualified medical personnel for emergencies.” Detainees must be “checked periodically in accordance with command health care directives.” Each use of “Separation” requires a “legal review.”

The DoD “talking points” conclude with the assurance that the use of the “Separation” technique (really a combination of various techniques under one name) is “an essential tool for interrogation, particularly in the first few weeks of internment.” The reason for this is the prolongation of the “shock of capture,” as the AFM refers to it.

While I welcome the release of the Pentagon’s “talking points” on Appendix M, the government must go further and release all the relevant documentation related to DoD review of what UN experts called “ill-treatment” and possible torture. Indeed, as an examination of relevant government documents show, current interrogation techniques raise enough threat of harm to detainees, even after the banning of the CIA’s “enhanced interrogation techniques,” that they require continual medical monitoring.

We still await a full accounting of U.S. interrogation practices and their effects on prisoners held in the U.S. “war on terror.”

Read the talking points and memos embedded below, or on the request page.

Jeffrey Kaye sent this request to the Department of Defense, Office of the Secretary of Defense of the United States of America

The booming business of Guantanamo Bay