“Why don’t we put sriracha on it?”

In the last three decades, that innocent line of questioning has helped transform millions of people into rooster sauce enthusiasts and has helped Huy Fong Foods — the producer of the now iconic red hot sauce — grow into a multi-million dollar company, sans advertising.

So in 2009, when the City of Irwindale, California (population approx. 1,500) wanted to sell a vacant lot and earn some reliable revenue for its Housing Fund, accepting the bid from the popular brand seemed like a sound plan.

Documents provided by the Irwindale city clerk lay out a generally warm welcome for the ever-expanding Huy Fong fan favorite. Just ten-ish miles down the road from its Rosemead, CA location and an hour away from Underwood Family Farms - sole supplier of the company’s fresh chilies - the arrangement appeared promising for both parties. Sriracha and anything is usually a good idea.

The factory’s development was greeted with positive press for the City. Mayor Pro Tem Fuentes noted at a December 9, 2009 City Council meeting that Dr. Oz had featured the sauce in a recent segment. When ground broke at 4800 Azusa Canyon Road in October 2010, it was on the largest commercial real estate development project in the county at the time. Over the course of the factory’s construction, Irwindale was lauded by the California Community Redevelopment Association and the Los Angeles Business Journal as an example of business-friendly government.

This was before operations had even begun. The Council, the City, and Huy Fong Foods waited for the late summer chili harvest season. In March 2012 Councilmember Ortiz noted in that the intersection near the factory looked much safer than before. An early concern about the potential of odor had been assuaged by staff that had visited the company’s Rosemead location and smelled no smelly smell.

In fact, by October, the Planning Commission’s Vice Chair was pleased by notes of chili in the air, indicating the location’s production was underway. 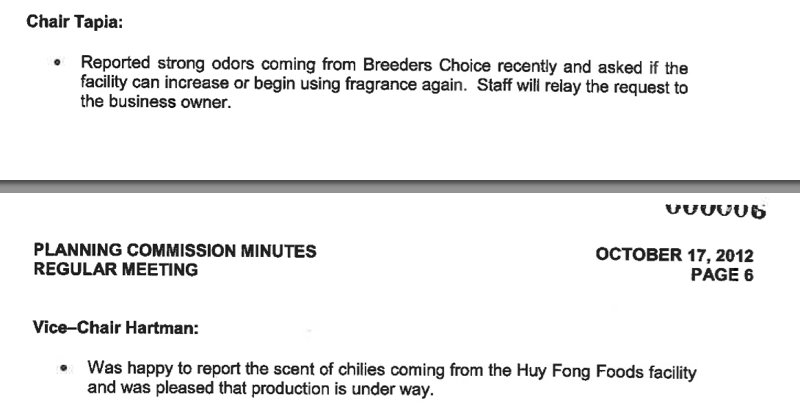 That tune quickly changed. The city reported that “numerous complaints were received regarding the odor and the chili.” It was not until more complaints reemerged in October 2013 that action was taken. In the sort of impassioned use of caps lock that you only see in government officials fueled by NIMBY-indignation, Councilmen David Fuentes and Manuel Ortiz (who lived near the factory and was later removed from Huy Fong-related internal communications due to this conflict) supported the possibility of the site’s shut down to solve the olfactory infractions. 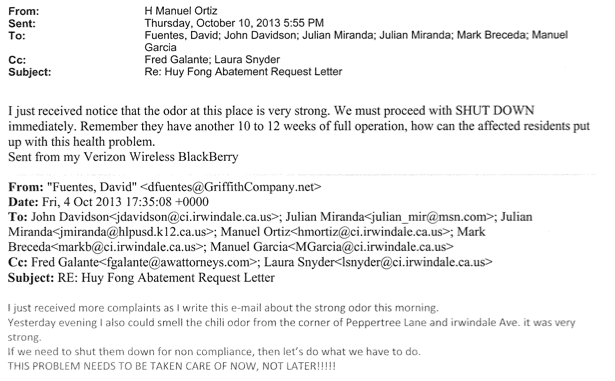 At an October 23, 2013 City Council meeting early residents complained of asthmatic issues and outdoor gatherings that were relocated indoors due to the air quality concerns, including Ortiz, who said he had “begun noticing red dust particles in his pool.”

Ortiz and Breceda began abatement action, and the Soil/Water/Air Protection Enterprise (SWAPE), an environmental consulting firm, which was represented at the meeting “expressed the company’s eagerness to determine long term and short term measures.” (The chili grinding season doesn’t begin until August, so their findings were based on stagnant conditions in the factory and their own approximation of chili grinding.) 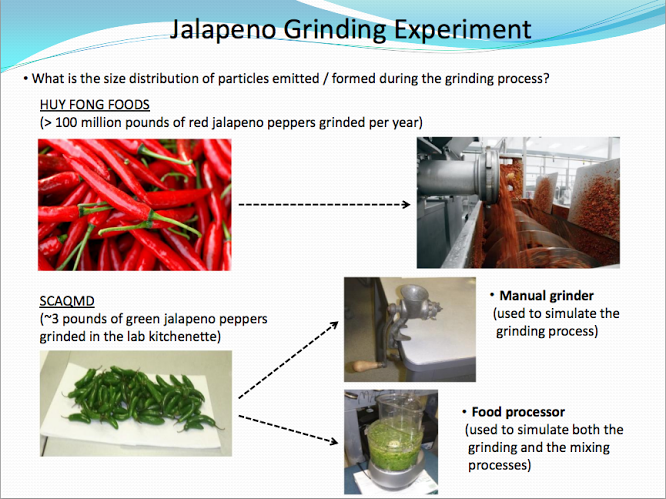 In April, the factory was declared a public nuisance. Other states began courting Huy Fong - in particular Texas, which can’t grow the chills necessary for the hot sauce production. At a closed door session last month, the designation was dropped and the Council reaffirmed its commitment to a partnership with Huy Fong Foods.

MuckRock has continued to file requests for the resolution the Council came to, the complaints made against the factory, and the economic impact of the factory on the community. You can follow those requests here and here.

As you can see, there are literally hundreds of pages to sift through, so feel free to dive in and let us know via info@muckrock.com if there’s anything we missed!

Image by Steven Depolo via Wikimedia Commons and is licensed under CC 2.0

Beryl Lipton sent this request to the Irwindale City Clerk of Irwindale, CA

Shawn Musgrave sent this request to the Irwindale City Clerk of Irwindale, CA