The Green Reaper, a Grim Reaper colored green and holding a flower, is the Department of Energy’s National Security Technologies Energy Program’s idea of how to communicate “sustainability goals, successes and best practices,” including “energy awareness and recycling programs,” to the community, and to small children specifically.

Energy’s response to a FOIA request for development materials was unsurprisingly sparse, omitting the actual creation of the character as well as documents available on their website. Their response focused mostly on the costume itself, for which the government budgeted $5,000 for. Alternative sources of the costume cited prices that were apparently significantly higher.

As described the company producing the costume,it consisted of a green “head with fan (on harness with robe attached”, a “body pod”, green tights, suspenders and shoes, a flower and globe staff, and a case for the whole thing. 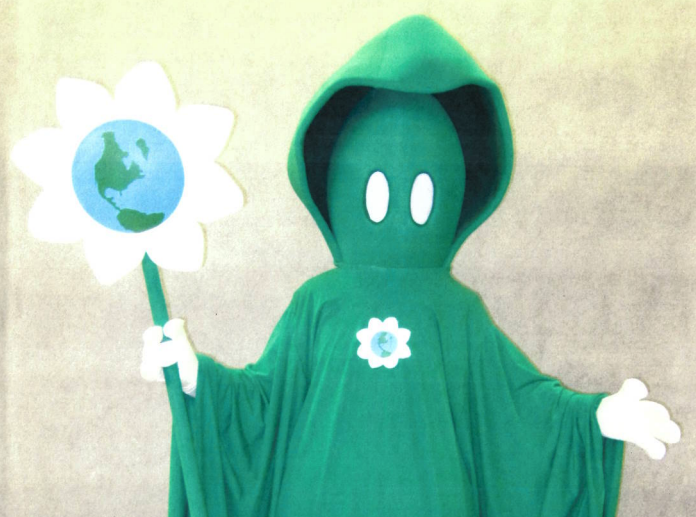 Though it appears in some photographs of the Green Reaper’s public appearances. 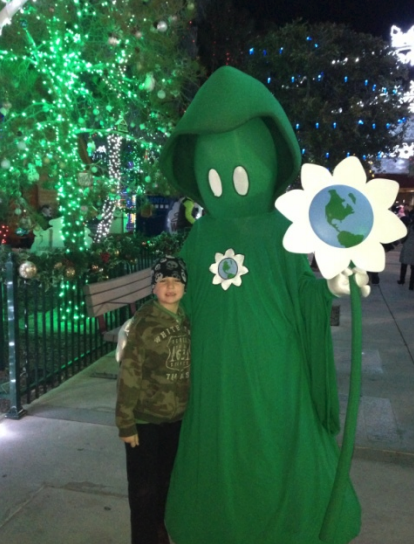 The government liked the idea enough that the Energy Program Manager who came up with it, Dawn Starett, apparently won an award for her trademarked character, which was apparently used in “announcements, newsletters, and other literature to encourage workers to conserve energy.” Despite being included in the FOIA request filed by MuckRock, these received only one brief in the government’s response for encouraging carpooling and using buses. In favor of these in house uses, the government’s response focused on the creation of the costume and its use doing “community outreach presentations to local elementary school children.”

The Green Reaper apparently visits children at schools throughout the year in addition to appearing “randomly” around the National Nuclear Security Administration/Nevada Site Office (NNSA/NSO). In it appearances at the schools, the entity, described in its creator’s trademark application as having “indisttinguishable [sic] features” and peering out “with white eyes from a green hooded robe,” asks children to choose a behavior to change that will foster sustainability. They are then asked to commit to this change for one year, In exchange for this promise, the Green Reaper leaves the child with a certificate.

So, thanks to FOIA we now know that it’s a government award winning idea to visit children dressed as a palette-swap of the Grim Reaper and extract promises of environmentally conscious behavior in exchange for a contract certificate. The plan to encourage corporate accountability must be with the files explaining why Energy thought that “Greenzo-but-Lovecraftian” was a good idea, much less an award-winning one.

You can read the costume design documents below, or the rest on the request page.