More often than not, Massachusetts has been hailed as one of the worst states in terms of access to information, blocking access to the judiciary, the legislature, and the office of the governor. Even more alarming, lengthy response times and frequently cited exemptions by its police departments all contribute to that reputation for restrictiveness.

In fact, in 2015, the Massachusetts State Police won a unique award for its “contributions” to access. The agency received the distinguished Golden Padlock Award, which is provided every year by the Investigative Reporters and Editors to the most secretive U.S. agency or individual. The state police beat other notably restrictive entities like the Colorado Judicial Branch, the Texas Department of Public Safety, and the U.S. Department of Defense.

“The Massachusetts State Police habitually go to extraordinary lengths to thwart public records requests, protect law enforcement officers and public officials who violate the law and block efforts to scrutinize how the department performs its duties,” said the Investigative Reporters and Editors (IRE) in its 2015 announcement. “It normally takes months or longer to respond to news media FOI requests. Requests for basic documents routinely produce refusals, large portions of blacked out documents or demands for tens of thousands of dollars in unjustified fees.”

To put things into context, Boston Globe reporter Todd Wallack shared a series of tweets on Twitter detailing his journey last year in trying to get five years’ of data from the MSP’s public logs.

But State Police demanded $20,625 to produce the data, mostly to manually review the data just to make sure it didn't accidentally include any confidential data in the public logs. pic.twitter.com/qv4iEQynao

Wallack was quoted over $20,000 for the data, which was ruled as a reasonable estimate by the state’s Supervisor of Records.

Similarly, MuckRock data shows the MSP hasn’t been the best in fulfilling requests filed by Muckrock users, even after winning the award. 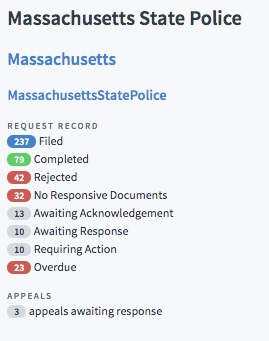 With 237 requests sent to the agency, less than half of those requests have been fulfilled - 79 to be exact. Although a common trend with MuckRock requests, our data on the MSP shows a large backlog still exists when it comes to completing requests.

Plus, a number of requests on the MuckRock front are pending due to high fees. This month, user Daniel Kaufman was quoted $270 for records referencing four hate groups. The majority of the cost is tied to labor and search fees, which is contingent upon the lowest paid employee possible to do the job. In addition, MuckRock user Curtis Waltman was charged $100 in 2017 for all records related to internal affairs complaints.

Since the award, a lot has changed with Massachusetts public records law and access to records. Transparency groups and legislatures alike teamed up to reform the state’s records law. A new five cent cap on copying fees was written into law as well as a set 10-day timeframe for agencies to respond to requests. Although no specific mandates to law enforcement agencies in the state, police departments are required to adhere to the new rules.

We reached out to the 2015 award winner, but they were unable to comment at the time of publishing.

You can read IRE’s 2015 letter to the MSP below as well as the internal emails regarding the award embedded below, released, ironically, through a public records request by Adam Vaccaro.

Have your own MSP horror story? Let us know through the form below!