From restrictive laws contributing to prolonged response times, and high fees stopping the release of records, the State of State Public Records Laws is on a bumpy ride. To get a better sense of what’s going on at the state and local level, we’ve been analyzing our MuckRock data and finding the trends in records requesting.

We took a look at over 2,600 agencies in MuckRock’s API, focusing on those that had received three or more filed requests through our site. While over 26,000 requests were filed to local agencies, a little over 10,000 of those requests have actually been completed and closed out. It should be noted, that although an agency completes a request, it doesn’t necessarily mean that the records have been released. On average, agencies across the country take about 59 days to respond to requests, despite state-mandated response times.

The NYPD, the country’s largest police department, has received a total of 444 requests filed though MuckRock, the highest number of requests received by any agency on the site. However, only 81 of those requests have been completed, and 159 have were rejected - over a third of all requests sent to the NYPD.

Many requests to the NYPD remain in limbo following an official acknowledgement from the agency. MuckRock user Alex Richardson has yet to receive further updates following his April 2015 request for meeting minutes, agreements, contracts, and memos. Per statute, New York agencies must respond within five days and include an estimated completion date if applicable. If the agency determines that a request will take longer than 20 days, an explanation as to why that’s the case must be included. 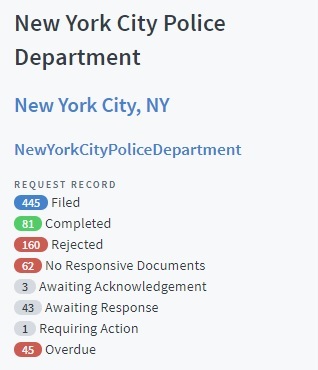 “3. (a) Each entity subject to the provision of this article, within five business days of the receipt of a written request for a record reasonably described, shall make such record available to the person requesting it, deny such request in writing or furnish a written acknowledgment of the receipt of such request and a statement of the approximate date, which shall be reasonable under the circumstances of the request, when such request will be granted or denied, including, where appropriate, a statement that access to the record will be determined in accordance with subdivision five of this section.” N.Y. Pub. Off. Law. Ch. 47 Art 6 § 87(b) 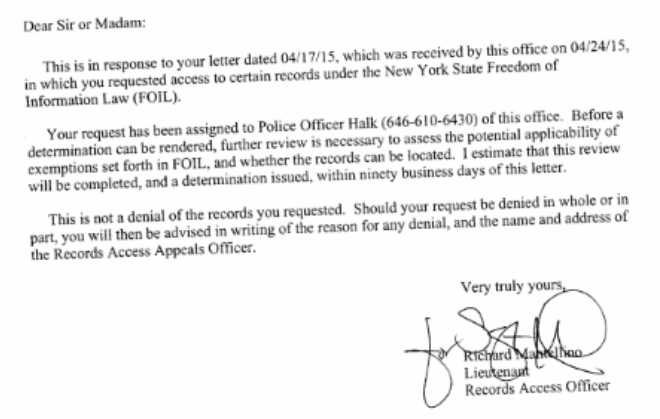 In Chicago, 380 requests have been completed by the police department, 181 of which have been completed. Although a much better rate than the NYPD, the CPD has rejected 30 of those requests and determined no responsive records for another 66 -roughly a quarter of all requests sent to the CPD.

Similar to the NYPD, many of CPD’s requests have been acknowledged without further updates on when records, if any, could be released. In the case of MuckRock user J Ader, his request for “Gang Audit Questionnaire documents” is still being processed, according to the agency.

The Illinois Freedom of Information Act also requires agencies to respond to requests within five business days, unless they cite one or more of seven reasons why a delay is necessary. These reasons include records being stored in other locations, records haven’t been located, or the agency needs to consult with an outside body.

In Massachusetts, MuckRock users have filed 336 requests to the Boston Police Department, 120 of which have been completed. 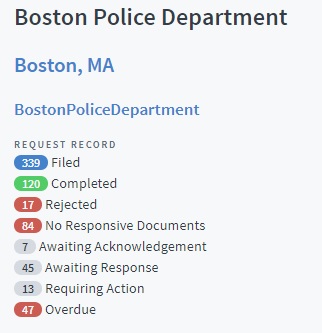 In contrast to the other two most sought out agencies on MuckRock, the BPD has only rejected 17 requests. However, 46 requests are pending resolutions.

BPD is also pretty timely in responding to requests, with an average response time of 112 days. MuckRock user Carolyn Komatsoulis waited less than a month to receive the citizen complaints and data she requested. Additionally, user Mike Davis waited less than two weeks to receive taser and body camera policies,

The BPD is nowhere near our top three law enforcement agencies with the longest average response time.

We’ll continue to look at our data to find the trends in public records requesting across the country. In the meantime, take a look at our State of State Public Records Law Project for more on the current state of your law. Plus, if you have your own records struggle, let us know via the form below!