The matter appears to have been first brought to the attention of the NSC in a June 21st, 1973 memo to officials in the State Department and on the NSC. This memo followed a June 16th report about President Nguyễn Văn Thiệu’s anticipated strategy for the August elections. According to the memo, the effort was inspired by the damage done to the Government of Vietnam’s image due to the uncontested 1971 Presidential election. In an attempt to compensate for this, elements of the U.S. government encouraged additional people to run in the Senate election. This was both to avoid the Senate being controlled by a single party and “to prove that the voters would indeed be offered a genuine choice.” In spite of these efforts, the requirement that Senate candidates be sponsored by approved political parties was not lifted, effectively limiting the number of people eligible to run. 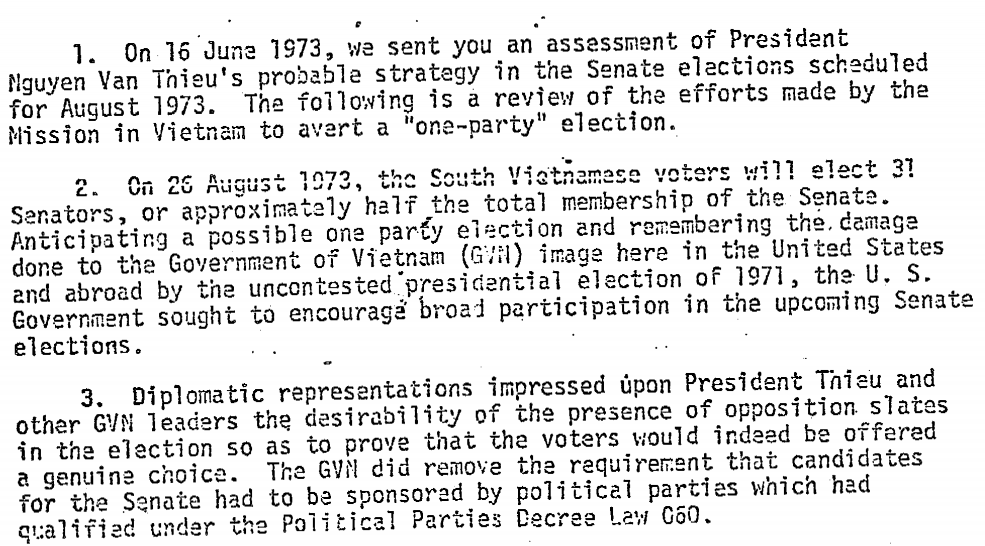 In response to this report, the June 28th memo to Kissinger was constructed. The memo wasted no time in presenting the facts. In its second sentence, it wrote that to the best of their knowledge, “none of these activities were cleared by the NSC, and this report represents our first word on what appears to have been a major intrusion on internal GVN politics.”

According to this memo, additional parties hadn’t been expected to run due to “a tight filing schedule which, they claimed, did not provide sufficient time to negotiate formation of lists.” This led to fears that the election would be “loaded” in favor of the Democracy Party. The efforts described in the memo may have been in vain, as “no opposition or independent slates filed for the election,” and the Democracy Party was apparently “certain” to be victorious. Notably, the Embassy assigned most of the blame for the no-contest election to both the American administration and the Vietnamese politicians who had had “ample warning” of the situation and failed to address it. 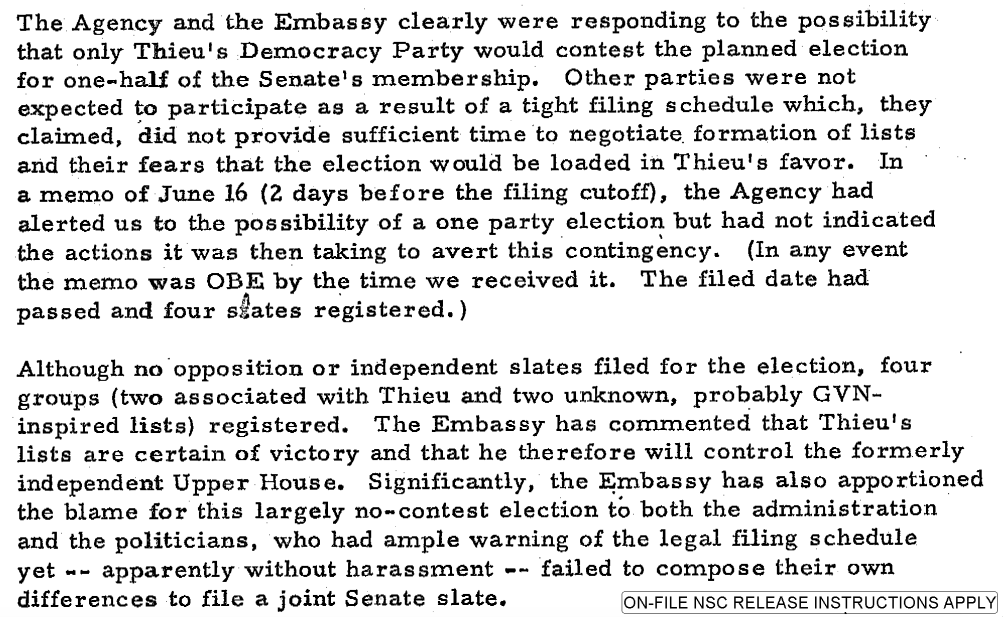 While the attempts to influence the election were relatively benign compared to recent headlines, having merely encouraged additional people to run in order to prevent a single political party having complete control, it is notable that the action was taken without either notice to or authorization from the NSC. As the NSC memo noted, even these relatively minor actions represented a “major intrusion” into internal politics.

MuckRock has filed new FOIA requests to learn more. In the meantime, you can read the memos from the Kissinger archive below.

Emma North-Best sent this request to the U.S. Department of State of the United States of America