FOIA is both a vital tool for the public to gain access to government records, and a frustrating process that reveals infuriating facts and sometimes even more infuriating government employees - as well as super helpful public servants who replenish your faith in humanity just enough to keep you filing FOIAs another day.

Here’s the best and worst of some of MuckRock’s recent interactions with the keepers of public information.

Cruel, but not unusual

In September 2017, MuckRock user M. Alan Thomas II filed a request with the Bureau of Prisons for rules on the playing and possession of role playing games.

All information regarding traditional (tabletop, not electronic) roleplaying game restrictions, whether regarding possession or manner of play or some other factor, at any or all prisons managed by the Bureau of Prisons, including but not limited to FCI Sandstone, whether prison-wide or limited to specific inmates or classes of inmates.

The response was oddly depressing, and shrouded in unwanted mystery: 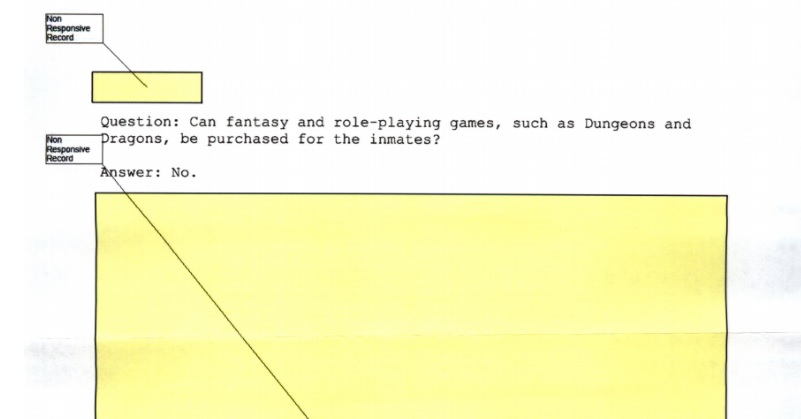 First of all, why the hell not? Are they afraid prisoners will use the game to come up with elaborate and fantastical escape plans? And is the redacted material classified and non-responsive, or just non-responsive?

In the realm of responses that make you go “how has nobody considered this yet,” Emma Best’s request for document destruction policies and guidelines revealed one page of rules that don’t appear to address the destruction of digitally stored information at all, unless they’re “pulping” and “pulverizing” actual computers.

Credit is due to the Attleboro City Council which finally released its executive session minutes from 2010-2015 on January 5th, long after the request was first made on July 10th, 2016.

Sometimes it takes much longer than it should (legally and reasonably) for an agency to release documents, but getting a batch of records from a request you’d nearly given up on is like finding cash in your pocket while doing laundry: unexpected and super satisfying.

Caitlin Russell sent this request to the Attleboro City Clerk of Attleboro, MA

Roleplaying game restrictions in the Bureau of Prisons

M. Alan Thomas II sent this request to the Bureau of Prisons of the United States of America