The Federal Bureau of Investigation’s file on telephone security measures appears to show the Bureau overlooking an obvious line of inquiry while investigating a leak to the mafia and possible tapped phone lines. While the file indicates that the Bureau checked both the Justice Department and the Internal Revenue Service’s phones for taps, it indicates they may have overlooked the most obvious possibility: that the culprit was the phone company employee who’d been giving the mafia access to the phone lines.

The case arose following an investigation by the DOJ’s Organized Crime and Racketeering Section into a Kentucky lawyer known for representing what the FBI described as “the gambling and criminal element.” According to an informant for the IRS, the lawyer in question had bought a new Chrysler that they were taking to Europe “by ship allegedly on a vacation to Spain.” According to the informant, however, the trip’s real purpose was to deposit $350,000 (the equivalent of just over $2,915,000 in 2018) into a Swiss bank account. Based on the information, Customs officers searched the vehicle and the lawyer’s luggage thoroughly, finding nothing.

The lawyer apparently told the Customs agents that they knew the Attorney General was “after him” and expected him to be depositing money into the Swiss bank account. Following this, the FBI file simultaneously raises and dismisses a possible lead. According to the memo, the Bureau was aware of an employee at the Atlanta Telephone Company who was “suspected of fraudulently making available long distance telephone lines to gamblers.” While this access was presumably for free (and hard to trace) phone use, the file doesn’t rule out the possibility that the phone company employee had given them access to the DOJ phone lines that were suspected of being tapped. However, they appear to have been some of the same “gamblers” in question, as the phone company, having become aware of the employee granting them access, monitored their calls and learned they were aware of an IRS informant and other details of the case.

Instead of addressing this possibility, the FBI had “strong suspicions” that the leak came from the IRS, but that it was possible it came from a tap on the DOJ’s phone lines.

Instead, the FBI decided that they would check the lines themselves. 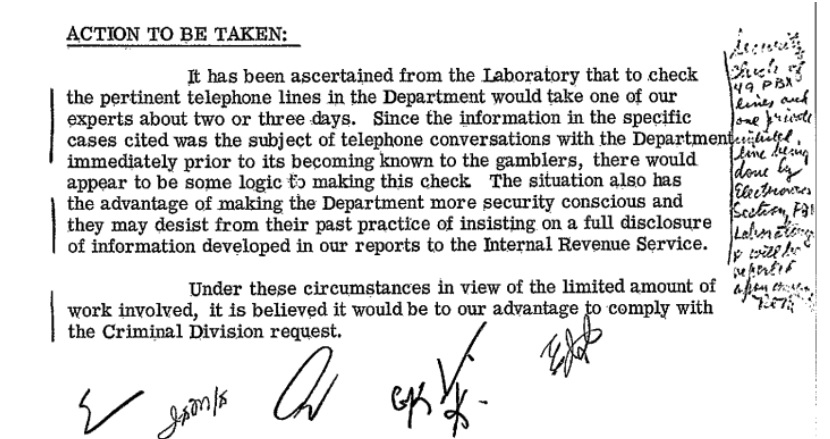 The FBI performed a physical survey of the phone lines, but found nothing. 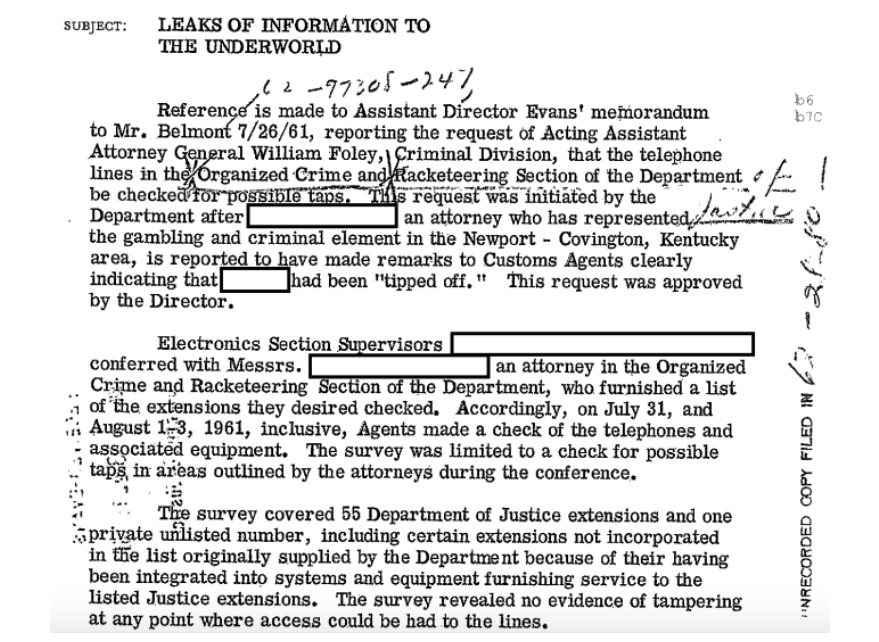 The Bureau informed a grateful DOJ that their phones didn’t appear to have been tampered with, seemingly ending the FBI’s involvement with the case. 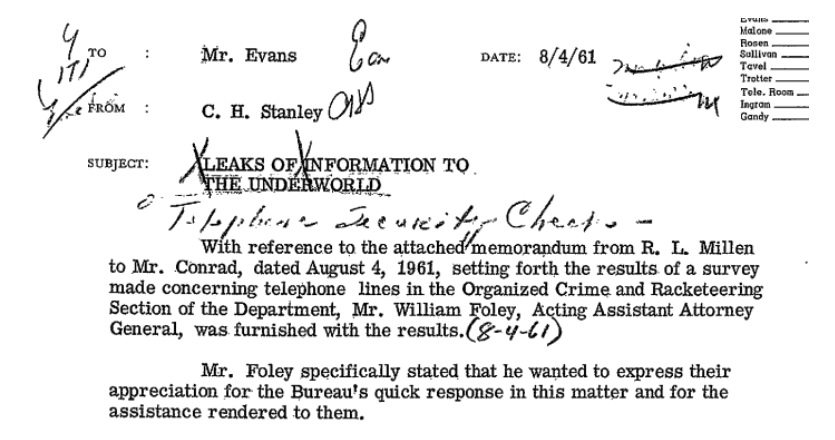 Whether or not the Bureau, DOJ, or IRS found the source of the leak remains unknown, but, based off these memos, it appears that the FBI’s focus on the technological may have blinded them to the simpler human sources that were virtually under their nose.

You can read the relevant section of the file below, or the rest on the request page.