Richard Nixon’s unsuccessful 1937 application to be a special agent with the Federal Bureau of Investigation is a fairly well-known bit of presidential trivia. 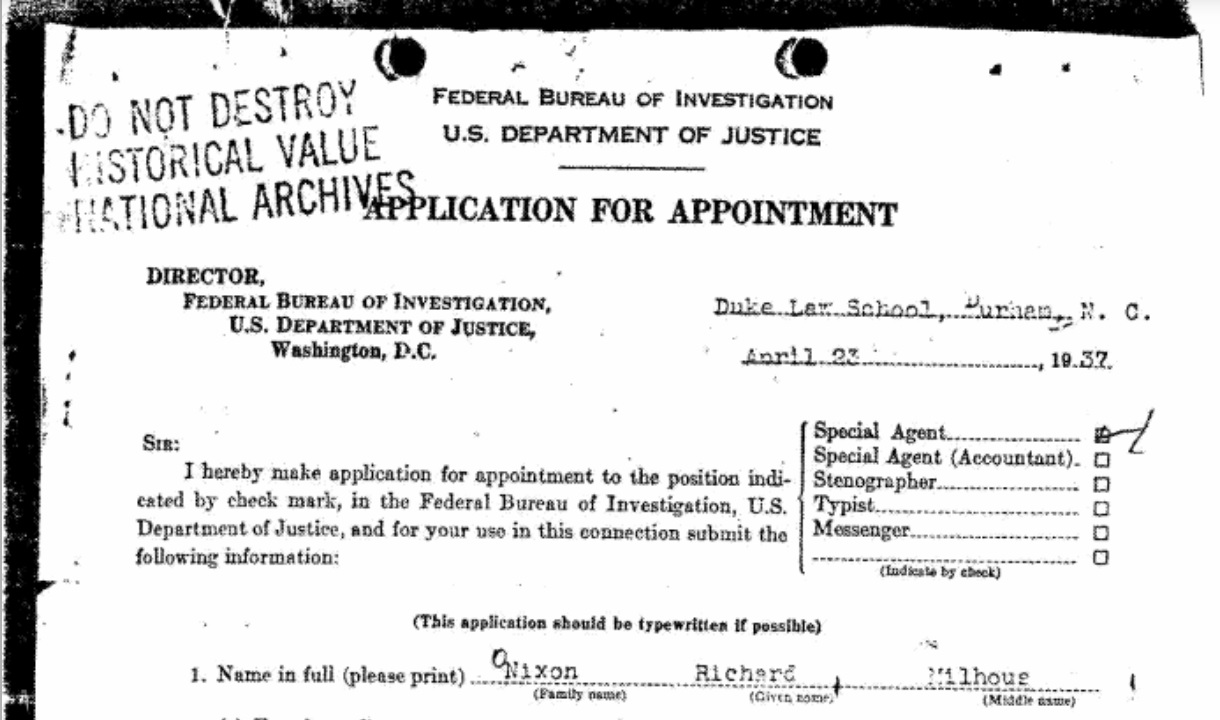 But as the Bureau’s own records show, answering the obvious corollary - why wasn’t Nixon FBI material? - isn’t so easy.

It’s not like people weren’t asking, either. The Bureau fielded inquiries from Congressmen, whose constituents were convinced the rejection was due to some hidden defect of Nixon’s character … 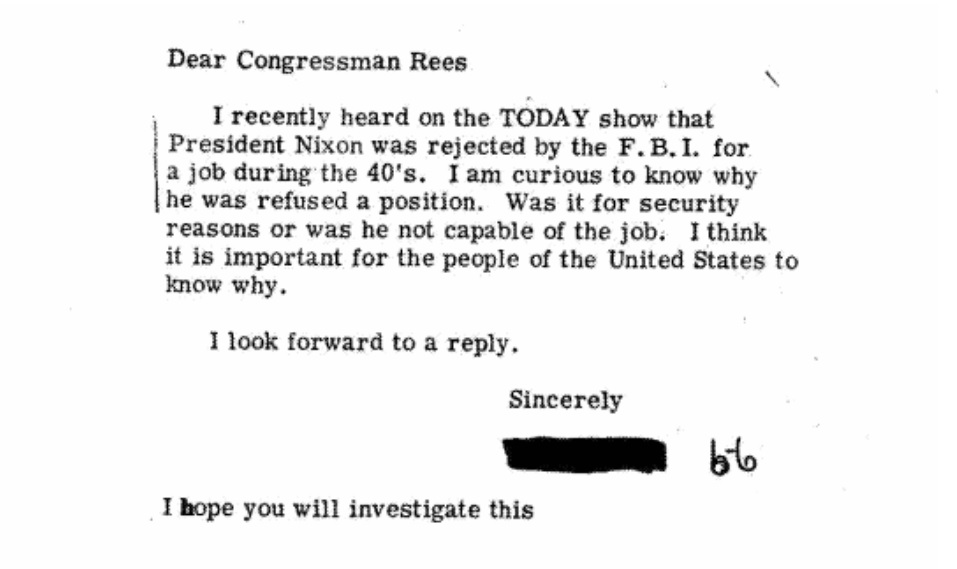 from the precocious daughters of former FBI agents … 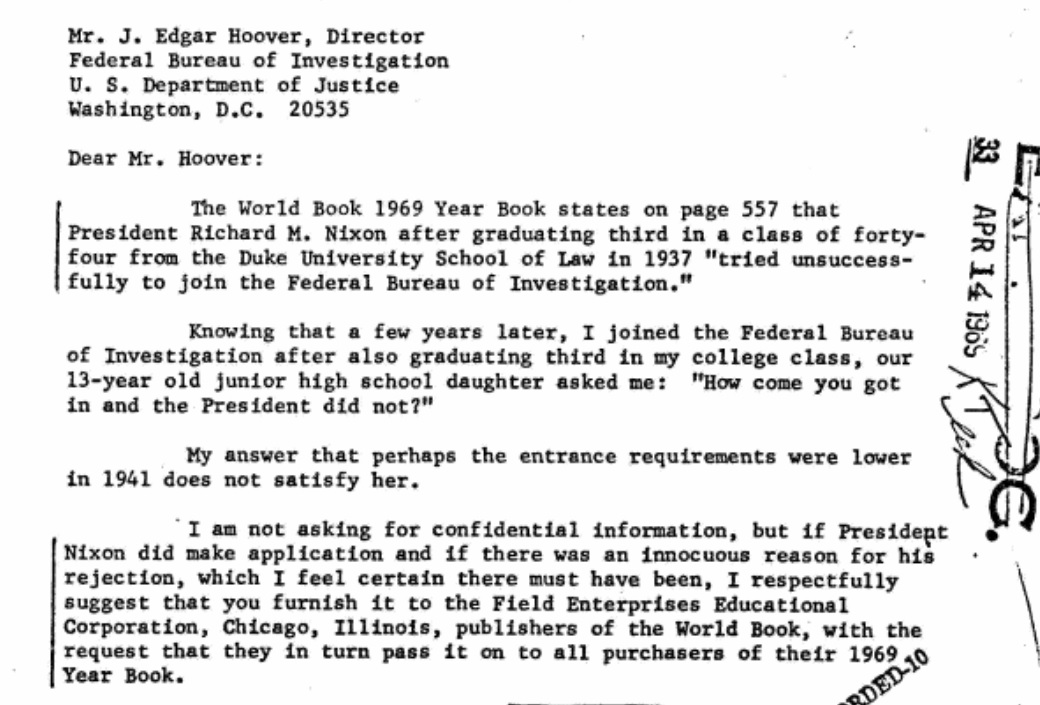 and from Nixon himself, who reportedly asked Director J. Edgar Hoover about the snub when he became Vice President in 1953.

Hoover reportedly said he’d check the files, and according to the release, he did, starting an investigation into the mysterious rejection a few months later.

So, what happened? Here’s what we know:

On April 23rd, 1937, a 24-year-old Nixon applied to the FBI at the encouragement of one of his professors at Duke Law School. A couple weeks later, the application was accepted by none other than Hoover himself. 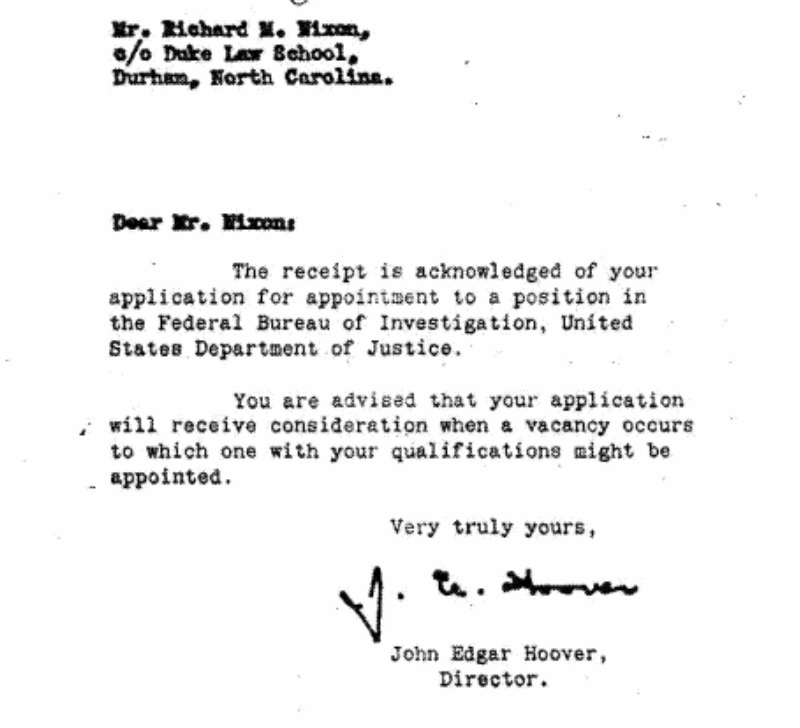 Nixon was then interviewed by FBI Special Agent J.H. Hanson, who found him neat, self-confident, and tactful … 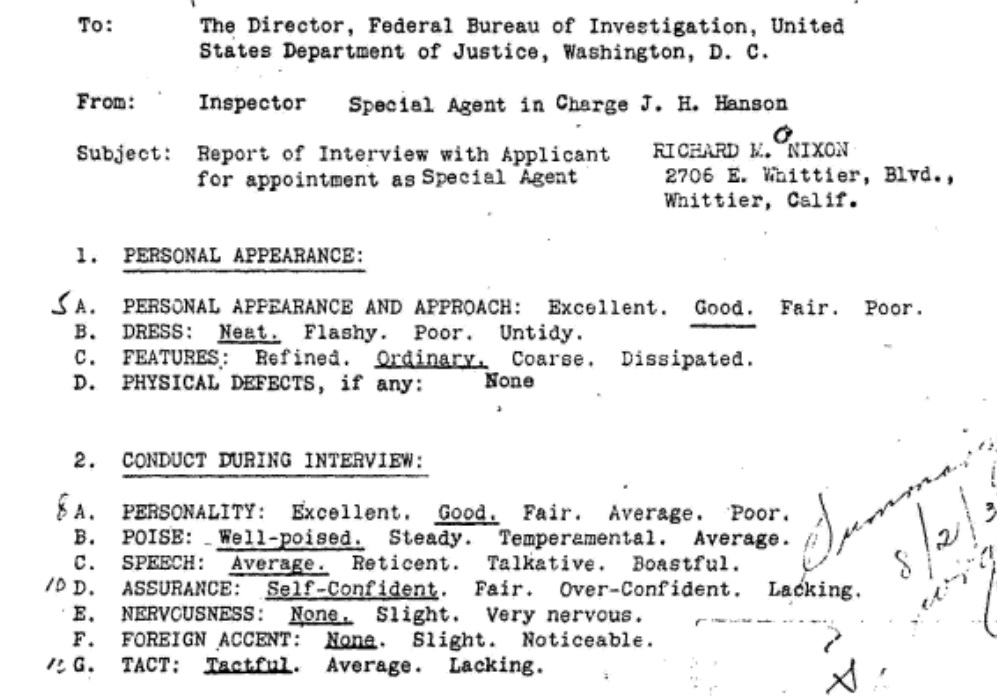 though - somewhat ironically for a future Chief Executive - not necessarily cut out for management. 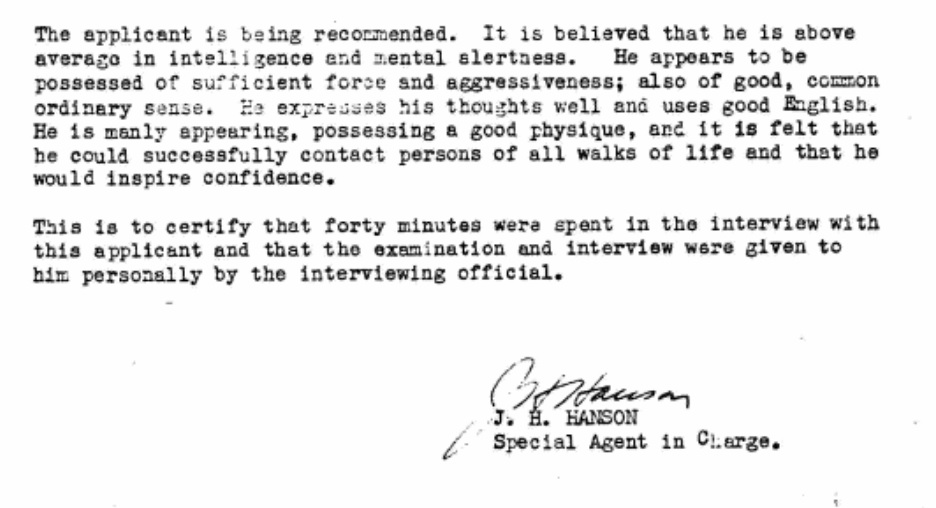 and a full medical exam. 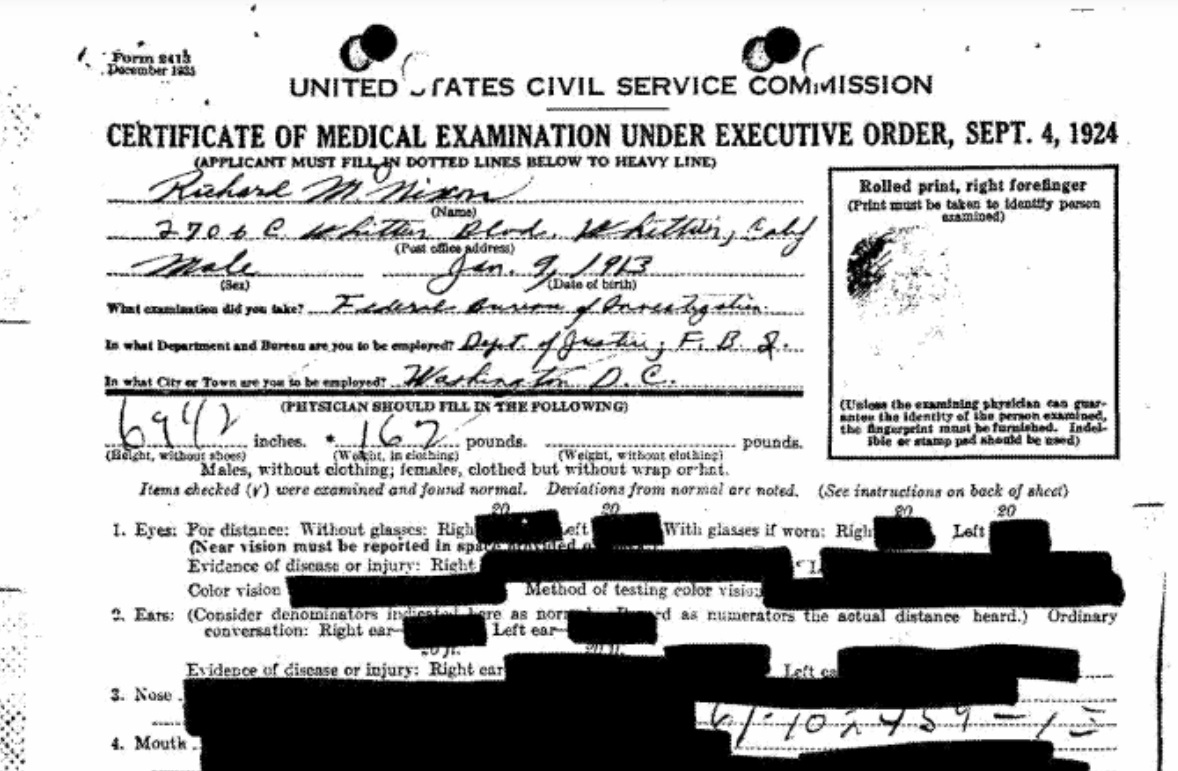 As these records were likely originally processed while Nixon was still alive, the entire details of Nixon’s examination are redacted under FOIA’s b(6) privacy exemption - which unfortunately for the Bureau, puts them in the rather embarrassing situation of “neither confirming nor denying” if a young Nixon had VD.

Regardless, Nixon apparently passed his physical, and his references were pristine as well; everyone praised him as “grade A-1” material, and the closest things to caveats were his old football coach warning that he had a tendency to overwork himself …

and one of his law professors, who didn’t want his fine legal mind going to waste at the Bureau.

Nixon, for his part, wanted to at least take the bar examination in California and wanted to defer joining the FBI until he heard the results.

Then things get murky.

Near the end of July, Hoover had sent a request to the Assistant to the Attorney General, asking for the formal approval to bring on Nixon as a Special Agent, with a salary of $3,200 a year. That request had been granted. 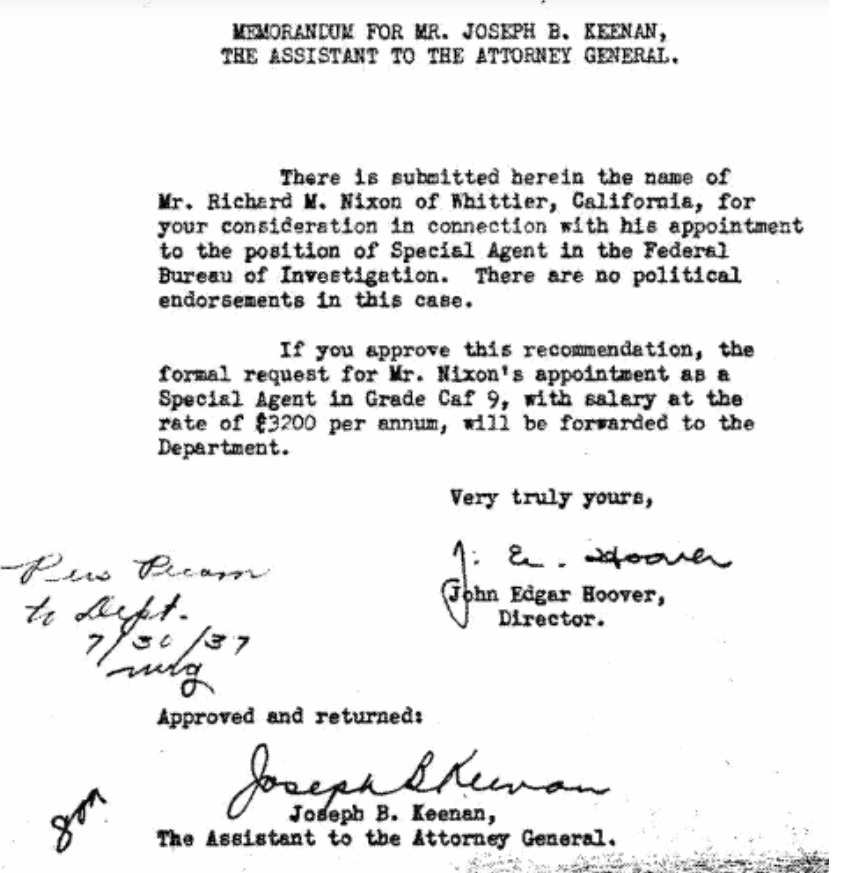 Just a little over a week later, however, a new record appeared in Nixon’s application file, with the handwritten note “not qualified.” Accompanying it was the direction “cancel appointment.” That was signed “T,” which indicated it had been written by Hoover’s right hand man in the FBI, Clyde Tolson.

Why the sudden change? Jumping back to Hoover’s investigation in the ’50s, folks in the Bureau were trying to figure that out themselves.

While they were able to nail down August 15th, 1937 as the definite date that Nixon had his offer rescinded, the only reason they could come up with is that Nixon had been disqualified on the grounds he wasn’t immediately available for employment.

Which, again, is just a guess. As the investigation says, “the reason for cancellation of the appointment is not reflected in the file.”

Hoover, apparently not liking that answer, or just eager to pass the blame, offered a different version of events: he had approved Nixon to be an agent, but then Congress didn’t approve the necessary funds, those jerks. This even became a sort of comedy routine between Hoover and Nixon when the former gave an address at an FBI Academy Graduation ceremony in 1954.

The truth comes out eventually, however. In 1969, the Bureau got ahold of a letter sent to then-President Nixon by someone on the special correspondents list with knowledge of the file (likely the former Special Agent with the precocious daughter from earlier), who pointed out that Hoover and Nixon’s version of events weren’t, strictly speaking, true.

Read Nixon’s full application embedded below and the rest on the request page.