As part of the investigation into the death of journalist Danny Casolaro, the local police created a videotaped “reenactment” of his alleged suicide. The tape was used later to help an expert conclude the death was a suicide, and then seized along with the other evidence by the federal government. In response to a FOIA request for a copy of the tape, the Federal Bureau of Investigation has declared that it’s exempt from release - but won’t say why.

According to the Bua Report, which has been found to be inaccurate and incomplete on several key points, the tape was prepared by the local police in Martinsburg, West Virginia along with the help of the West Virginia Deputy Chief Medical Examiner who performed the autopsy (after the body had been embalmed in violation of West Virginia law). The tape was provided to Dr. Henry Lee, who, according to his website, has “consulted on more than 8,000 criminal cases in 46 countries, including the O.J. Simpson trial and the JonBenet Ramsey murder investigation,” as well as the Vince Foster case. 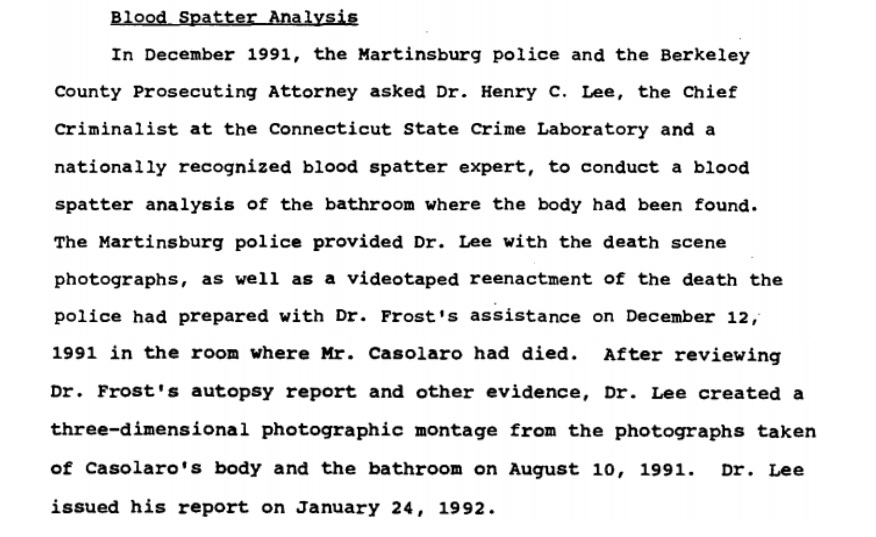 The “reenactment” tape was reportedly among the evidence considered by Lee while concluding that the death was “not inconsistent with a suicide.” As part of his report, Lee offered a very detailed theory of Casolaro’s death, citing the autopsy report and the crime scene and corpse photographs (which show surprisingly little aside from some of Casolaro’s wounds). 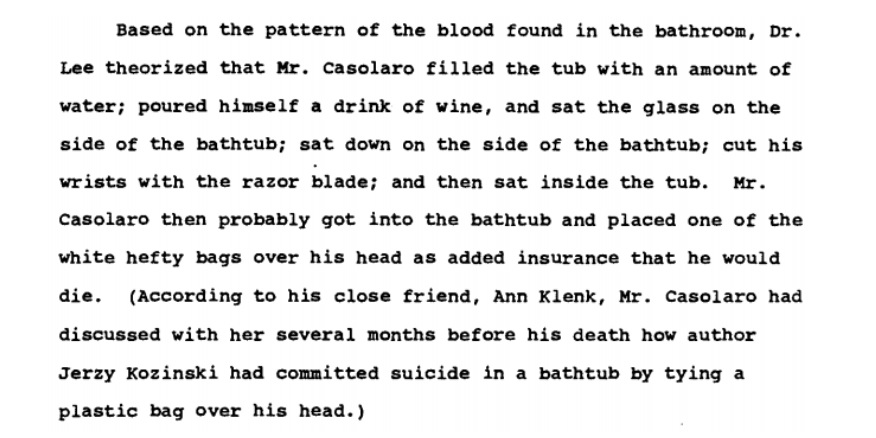 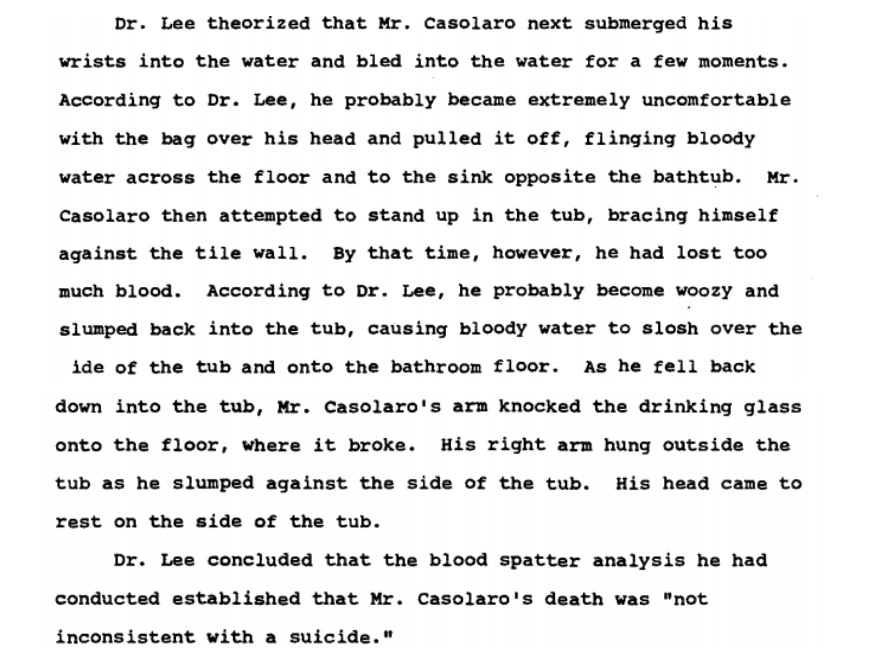 Given the level of step-by-step detail in Lee’s theory, it seemed plausible that the theory was at least influenced by the “reenactment” video the police had prepared. In response, a FOIA request was filed for “a copy of the videotaped reenactment of the death of Daniel J. Casolaro, which was prepared in the course of the investigation,” noting “that all such records were transferred to the FBI” according to the Martinsburg police department. Eight months later, the FBI responded by claiming that the records were withheld. While FOIA requires agencies to cite the relevant exemptions from the Freedom of Information and Privacy Acts, the Bureau cited the entirety of the acts.

The denial cited another letter the Bureau had sent in response to a previous general request for records on Casolaro and his death, “as well as a cross-reference search for Alan David Standorf, Inslaw, PROMIS and Main Core.” The Bureau’s search initially identified “approximately 1,380 pages of records potentially responsive” to the request. No mention of any videos are made in this letter.

The FBI then reviewed 34 pages, releasing 29 of them while citing several exemptions. No mention of any videos are made in this letter, despite being the March 24, 2017 letter cited in the Bureau’s denial of the request for the video “reenactment.” 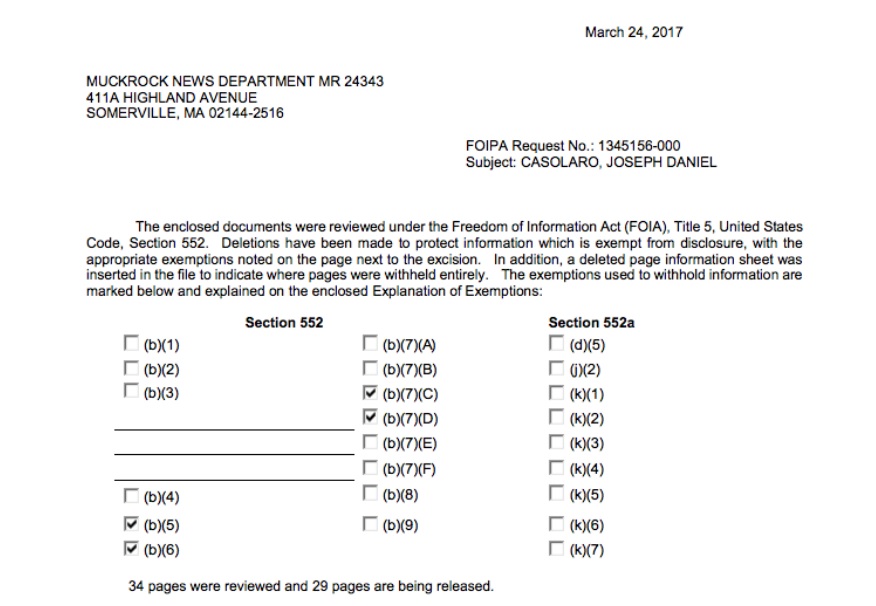 The letter also claimed that some “documents” (again, no mention of videos) were “not included in this FOIA” because they were “responsive to another subject in your request” and not Danny Casolaro.

As MuckRock has noted elsewhere, the FBI and the Department of Justice cannot seem to agree on whether these materials were excluded from the request, withheld, or missing, with the DOJ claiming that “ the FBI has not used any exemptions to withhold these records.” Again, no mention of the video is made, though the DOJ refers to “records” and not exclusively to “documents” as the FBI did.

In response to a request to clarify what exemptions were being cited to withhold the video, the Bureau never responded. Similarly, the DOJ never responded to the appeal of the decision to the Bureau’s handling of the FOIA request.

According to former NYPD Detective and Vanity Fair editor John Connolly, several years after Lee issued his report, he called it into question when he learned that the same police who prepared the video had withheld evidence from him. Upon being told about the presence of towels that were not only bloody, but appeared to have been used to try to clean up blood, which were found along with Danny’s body but apparently omitted from both the Bua Report and the police photographs and thrown away, Lee noted that “a reconstruction is only as good as the information supplied by the police.” 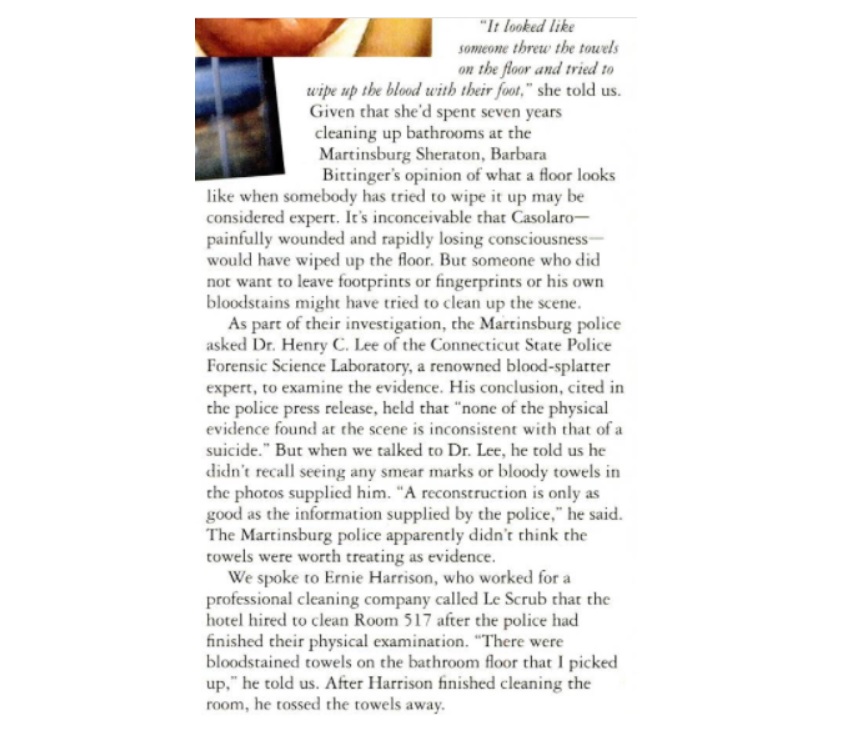 Without being able to review the video, it’s impossible to tell how closely it matches, or influenced, Lee’s initial report and theory about Casolaro’s death. At its most innocuous, the video “reenactment” was highly leading. At its worst, it spoonfed a theory to Lee - a theory that he was contradicted by physical evidence that Lee wasn’t informed about. The Bureau’s refusal to release the video, along with a bizarre refusal to comply with FOIA’s requirement to cite exemptions and the DOJ’s ignoring of the appeal, deepens the mystery of the tape while calling even more of the Bua Report’s conclusions into question.

The Bua Report is embedded below.