The Franklin Circuit Court has found that the new state exemptions are not retroactive, and the State Journal, along with Alfred Miller, will obtain the requested records today, despite the new exemptions taking effect this year. Following the release of records, a pending status conference in the Franklin Circuit Court will look into any issues with redactions and legal ramifications for those redactions.

The State Journal and the paper’s former reporter, Alfred Miller, were sued by the Kentucky Finance and Administration Cabinet last year after the paper’s winning appeal for the meeting minutes, schedules, and other procurement records of the Finance and Administration Cabinet’s Built-to-Suit Selection Committee. Luckily, Franklin Circuit Court Judge Phillip J. Shepherd ruled in favor of the paper, echoing Kentucky Attorney General’s decision, 17-OMD-207, that the committee is subject to the open meeting and open records act. 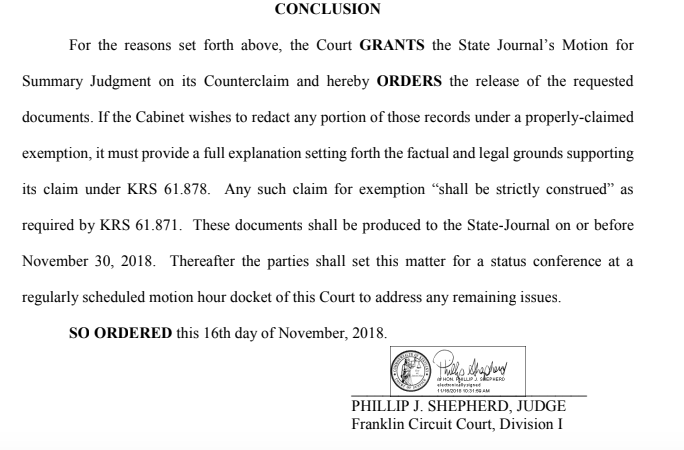 Despite the successful ruling against the agency last month, two new exemptions made their way to the Kentucky Open Records Act, directly blocking access to records of a procurement process and any personal communications.

“The enactment of the exceptions for public procurement confirm that Kentucky’s legislators have accepted the notion that “darkness is the best disinfectant,” said Amy Bensenhaver who represented Miller and the paper in the lawsuit and served as the State’s Assistant Attorney General for 25 years.

Regardless of a successful appeal and a winning lawsuit favoring the paper, legal efforts weren’t enough to get the records released. The new exemptions were recently added during Kentucky’s latest legislative session and create a definitive halt for the release of the records. Alfred Miller, a former State Journal reporter who now works for the Courier Journal says the department showed a “blatant abuse of the law.”

“There is this carved out exception to the law, but when I poked them [for the records], they said they needed more time. But, they had to provide a valid reason for the delay, instead they just ignored the open records law,” said Miller.

In response to Miller’s appeal last year, the Finance Department said it didn’t believe the agency was exempt from Open Meetings Act, but noted that the issue fell under a matter of timing and privacy for the committee members.

“The argument that public oversight was likely to result in bid rigging and collusion had no support,” said Bensenhaver. “No examples of specific incidents were cited. But the legislature firmly and finally closed the door to the public’s limited right of oversight.”

With a long stall to obtain records, it is unclear if the paper will pursue additional legal action. However, Benshaver says the final decision could be appealed to the Court of Appeals.

In addition to new exemptions to KORA, the Kentucky Open Meetings Act also saw a new addition. KRS 61.810(1)(n) was also added during Kentucky’s last session and creates an exception for discussion of public procurement.

Image by Patrickneil via Wikimedia Commons and is licensed under CC BY-SA 3.0