Since last September, MuckRock has been tracking every Homeland Security-run fusion center in the country’s investigations into Antifa and white supremacist groups. And it looks like they’ve noticed! Here’s the State Terror Threat Assessment Center of California:

Inspired by that shout-out, today we’ll take you on a rundown of the responses we’ve gotten back from the Golden State.

This is the article that the California state fusion center was linking to. Fitting the emerging trend, NCRIC didn’t have too much on white supremacists, but it was clearly spending a lot of time on Antifa. Consider this response to an email from the Missouri State Highway Patrol: 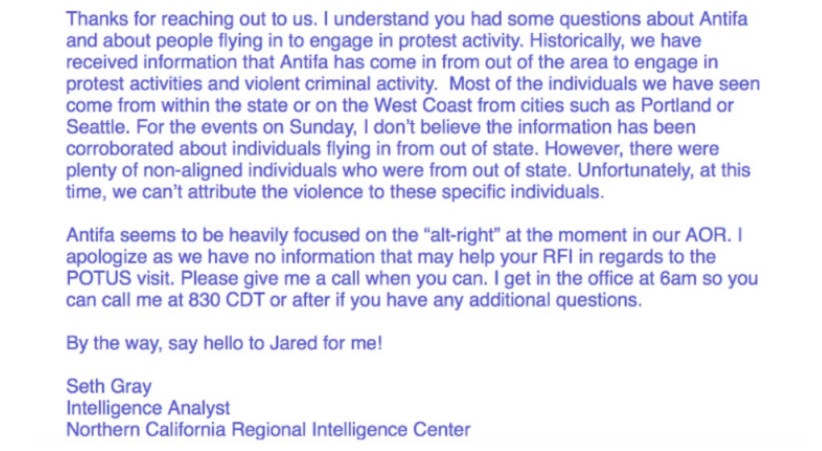 Antifa may be open to critique, certainly, but the idea that someone in government intelligence would seriously advance the idea that they’re a sinister anarchist criminal network is troubling.

Featured in the same article is the response from the CCIC, which goes even further. 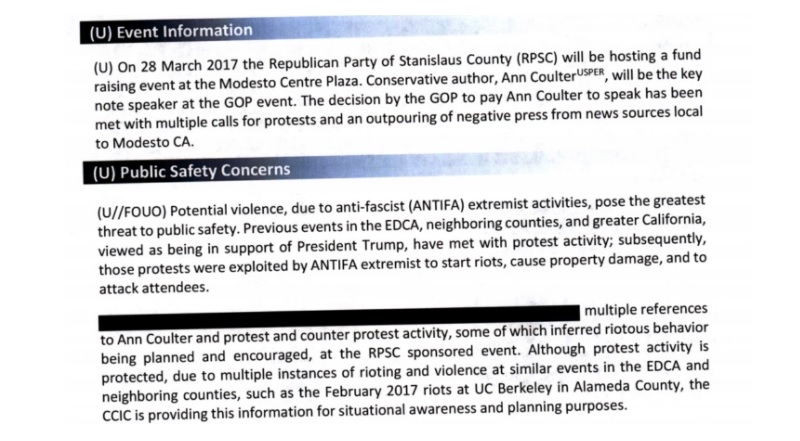 In CCIC’s view, Antifa’s activities pose the “greatest threat to public safety” - not the white supremacist groups that Antifa was formed in opposition to.

This was our most recent release, and totaling over 1,800 pages of material. The main revelation within these pages, as has been reported elsewhere, is the fact that DHS released a report on August 11th - the day before Heather Heyer was murdered by a neo-Nazi at Charlottesville - which identified Antifa as the “principal driver” of violence at rallies which had Antifa and white supremacists attending. 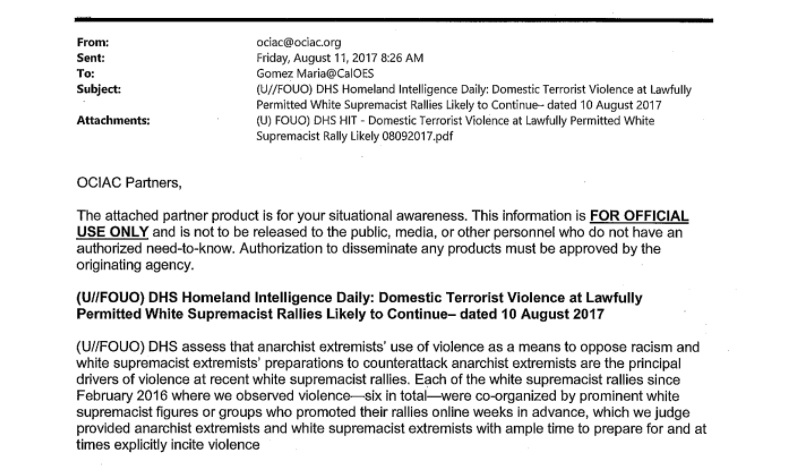 The rest of the release is primarily filled with documents we have received from other California fusion centers, with some notable exceptions. Take this intelligence brief on Alex Stein, a member of the neo-Nazi group Vanguard America. 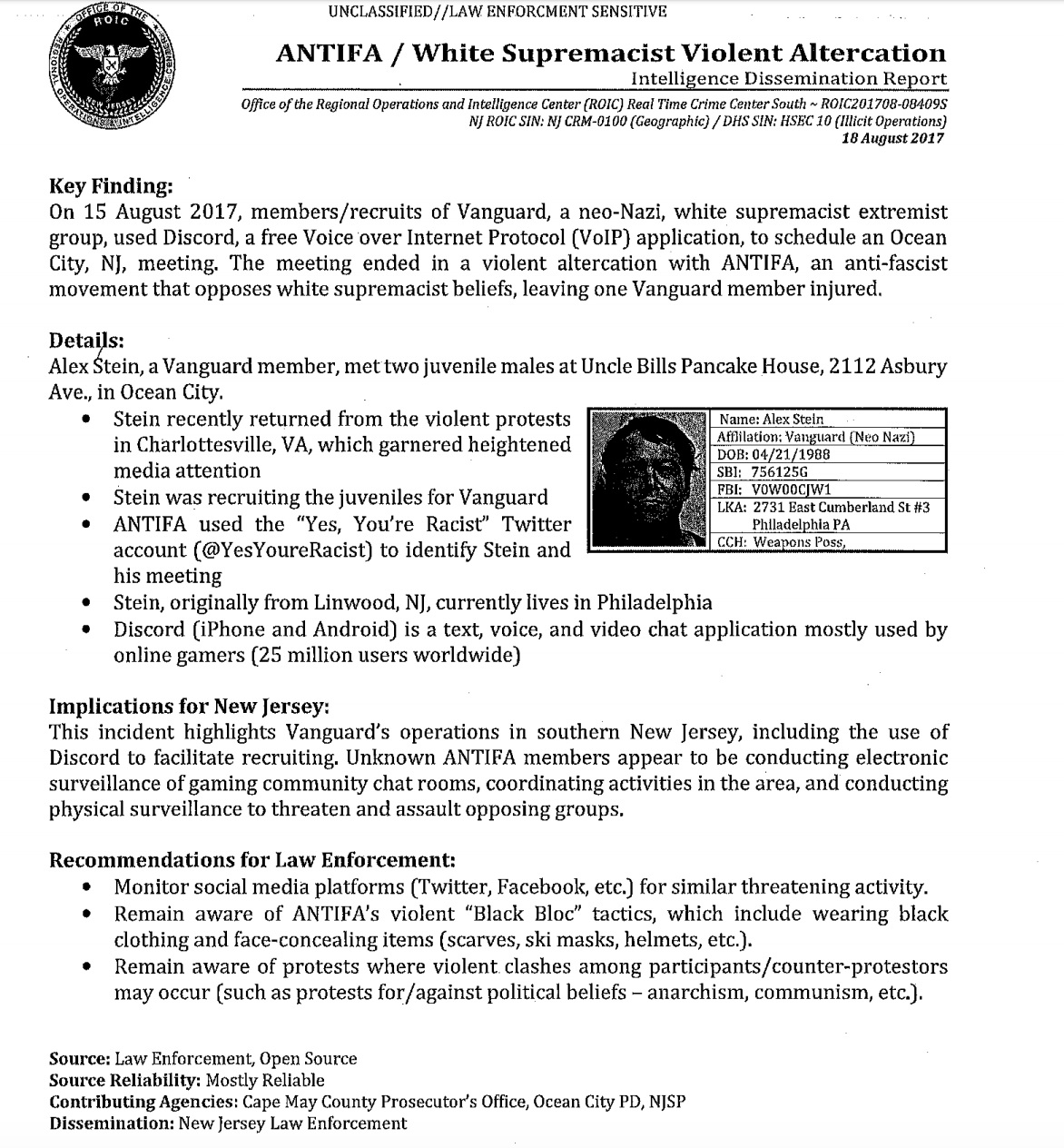 Notice especially the recommendations section at the bottom, but also the implications for New Jersey (this release from STTAC included documents from fusion centers around the nation). The brief is actually more concerned with Antifa, rather than the group promoting genocide. Heyer’s killer, James Alex Fields, was seen carrying the Vanguard America logo during the Charlottesville, though the group later denied an afflication member. One document explicity downplays the threat from white supremacist groups, saying that they have “only” killed 49 people since 2000. This rate seems to be going up quickly, with the rate doubling in the last year. 34 were killed by neo-Nazi groups in 2017.

Yet the STTAC release includes more documents like this, taken from a joint brief with the Southern Nevada Counter Terrorism Center:

Note that this fusion center had almost nothing on the violent white nationalists in their own backyard, and yet are intensely focused on Antifa. 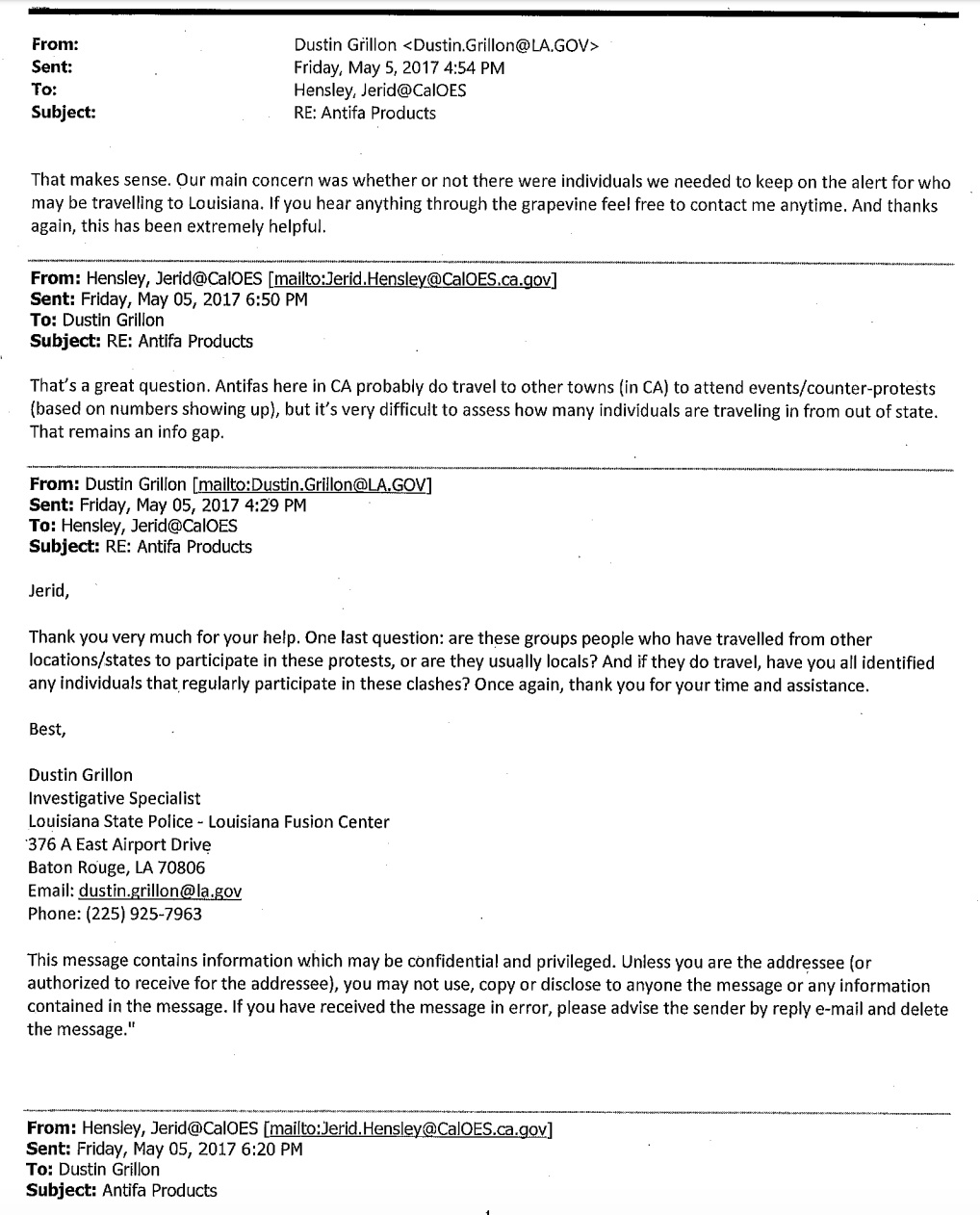 Also included are some slides from the NCRIC, talking about the “Radical left and radical right violence.” Predictably, those slides blamed Antifa for starting the violence in every single instance. 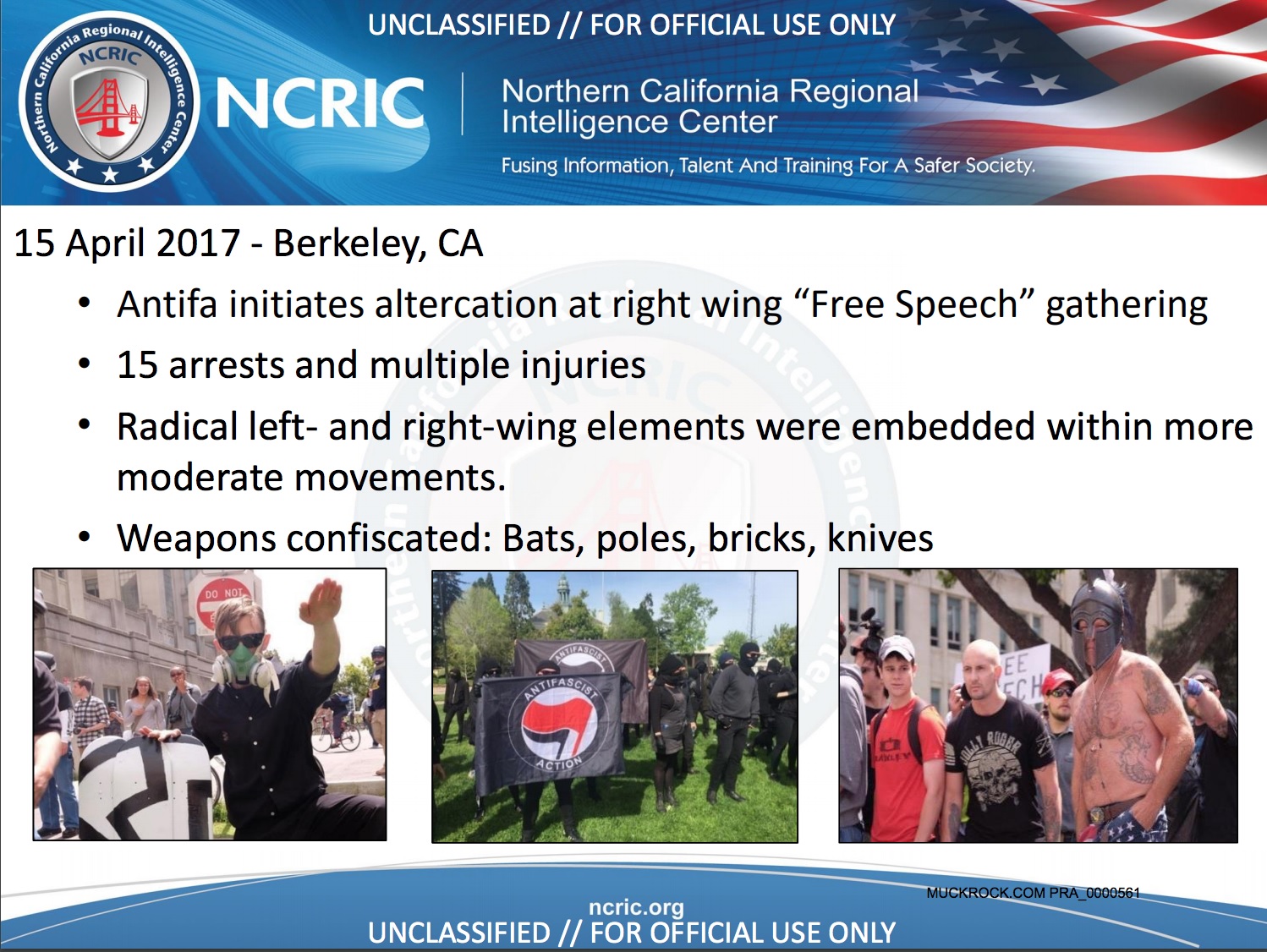 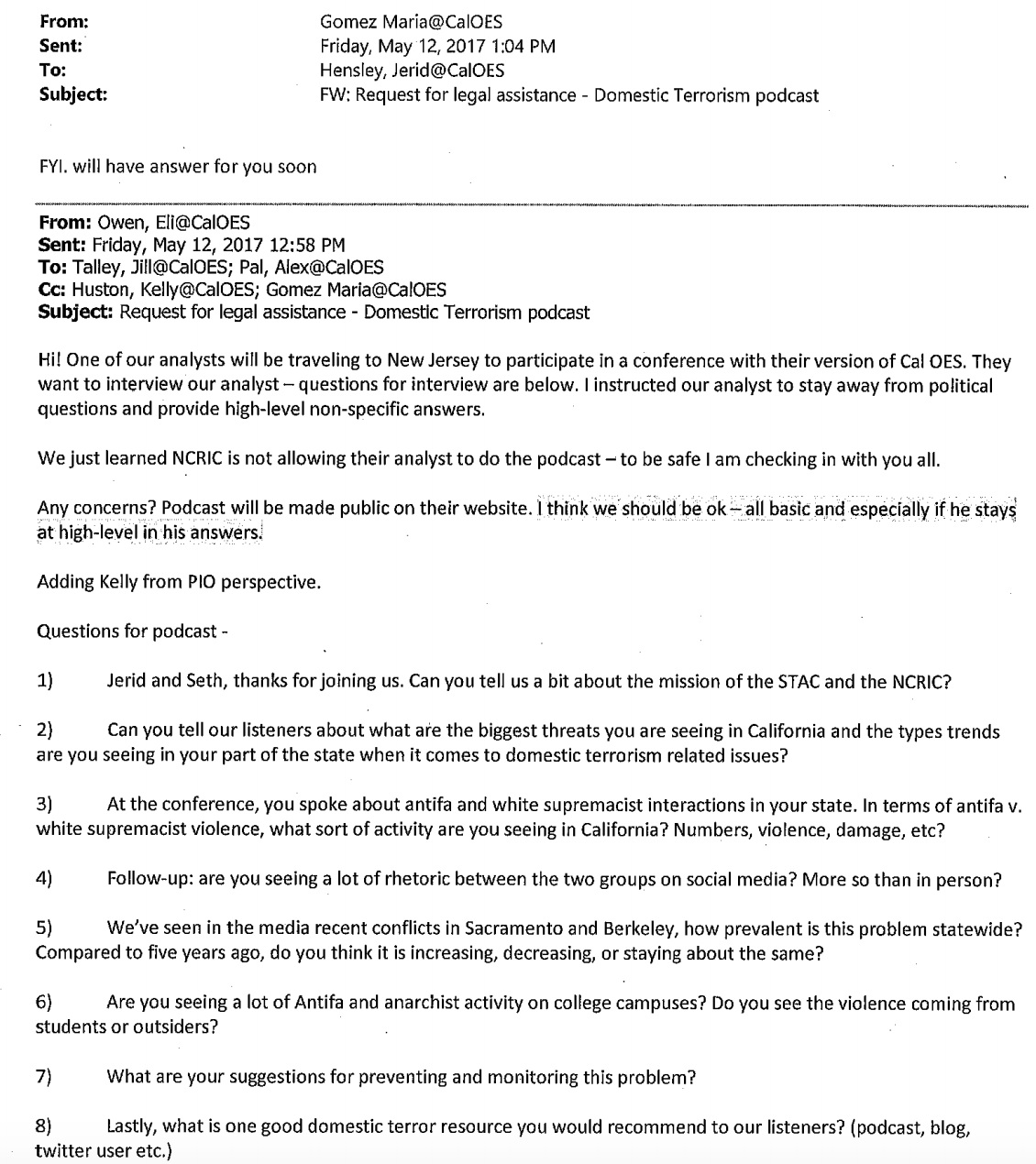 It’s important to remember that this release and many of the others did include intel on white supremacists. They are not being completely ignored. The problem is false equivalencies, at the detriment of important investigations into groups that have aims that are more explicitly and more radically violent. As the white supremacist murder rate skyrockets, perhaps more attention should be on them, and not Antifa.

Red the full STTAC release is embedded below, or on the request page.