Based on a release from Homeland Security’s Northern California Regional Intelligence Center (NCRIC), law enforcement appear to prioritize cracking down on Antifa, rather than white supremacists or other Fascist groups.

The request was part of a series sent to fusion centers, including the NCRIC, and asked for all communications and reports regarding a list of white supremacist groups such as Vanguard America, the Traditional Worker Party, and Identity Evropa, with Antifa included separately . In one exchange, an intelligence analyst for the NCRIC fielded a question from the Missouri State Highway Patrol regarding out of state Antifa protesters. 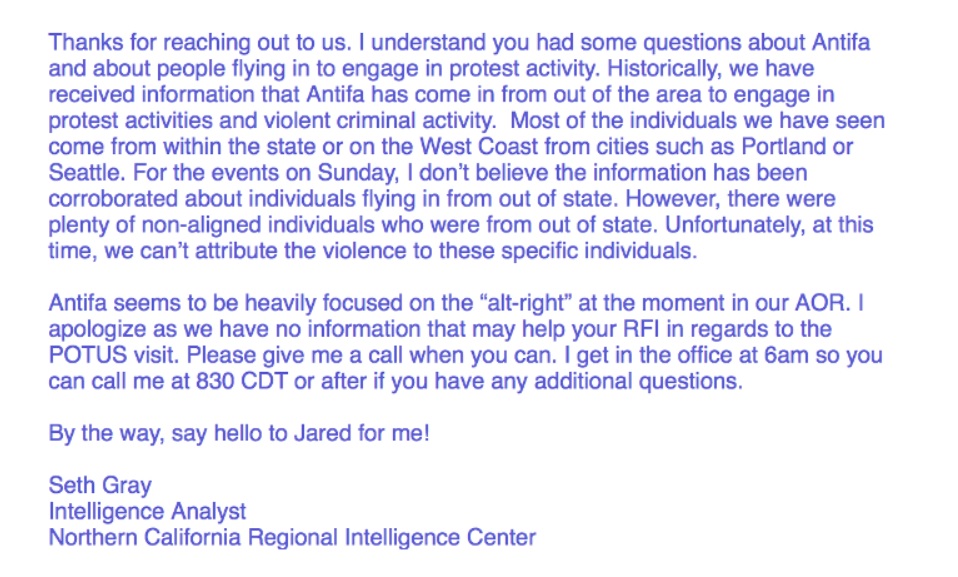 The words “violent criminal activity” are doing a lot of the work up there, and are pretty surprising when considered in light of Antifa “members” having only been found guilty of some mild property damage, whereas just last month, Fascist organizations have seen their members beating black men with pipes, running down a leftist protester with a car, and provoking incredibly dangerous riots.

Judging from an email thread titled “Antifa presentation,” UC Berkeley requested that the NCRIC give them a presentation ahead of Ben Shapiro’s speaking tour. The title of the NCRIC lecture was “Presentation on Criminal Threats to First Amendment Protected Activities and the Role of the Fusion Center.”

Also included in the release was a threat briefing. All but six bullet points were redacted, but what was in there was pretty interesting:

Couched in a “both sides” rhetoric, the bit that does get specific, about how the “spontaneous nature” of white supremacist violence “challenges prevention efforts,” comes off as a little absurd when taking into account a news bulletin the NCRIC included in this very release: 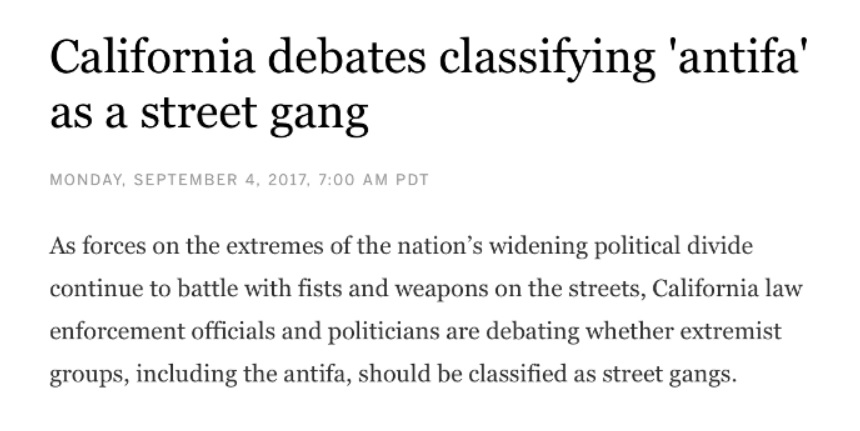 In one email, employees of the California fusion center were discussing white nationalist rallies that were taking place in the region recently, and planning ahead for violence at them. For the “No to Marxism in America” rally, Kyle “Based Stickman” Chapman was banned, and put into custody following his violent behavior at a previous Fascist rally. Anything that could be used as a weapon was also banned.

While the rally still ended in pepper spray and 13 arrests, it was a far cry from the chaos of the April rally in Berkeley when Fascists and Antifa fought for hours in the city’s streets. Even Mother Jones reported that regular, everday protesters had thanked Antifa for being there in Berkeley for the August 27th rally, and except for an isolated case or two of violent struggle with a Fascist organizer, simply handed out anti-racist flyers to local businesses.

All of which would appear to make explicit what the very existence of these reports contradicts - that the violence of Antifa and the violence of white supremacist Fascism are not equivalent at all.

Read the Ben Shapiro event report embedded below, and the rest on the request page.