Of former Director of Central Intelligence Bill Casey’s actual remarks at SIGNA Society meeting in 1982, only the first page is released. The not-quite two paragraphs of text include an introduction thanking the SIGNA Society for meeting with him, and a paragraph stating that leaks are bad. The rest of the speech is withheld on unspecified statutory grounds. No portion of any other speech to the SIGNA Society appears to have been included in the CREST database. 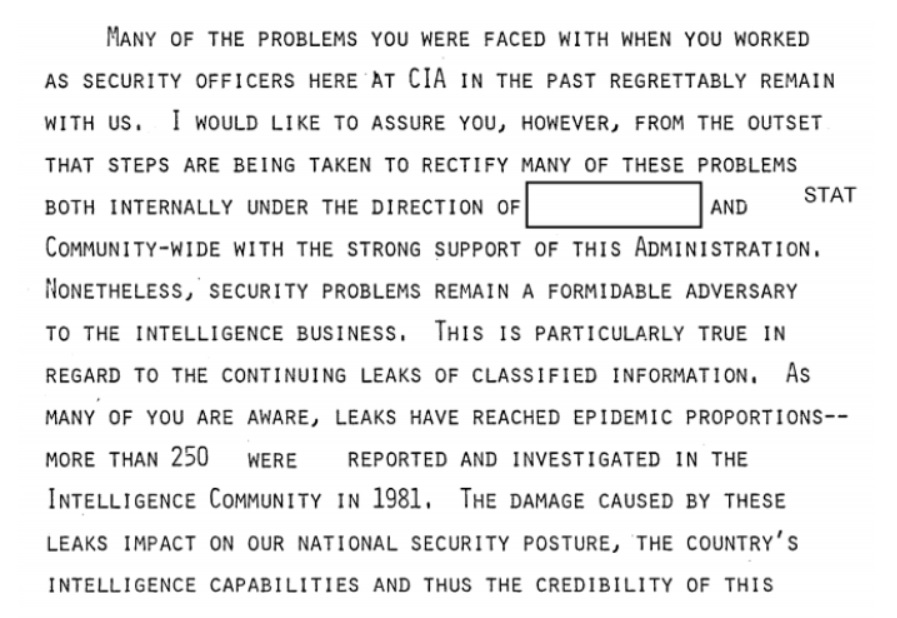 While the prepared remarks have been denied to us, despite having been unclassified in their original form, a copy of notes relating to the speech has been released through FOIA. It’s unclear if these notes were prepared as part of the speech’s writing or if they were made in response to the speech itself. In the opening section of the notes, Casey acknowledges SIGNA’s work in supporting the Central Intelligence Agency (CIA) and helping with recruitment.

The notes indicate that Casey railed against “so-called authorized leaks,” a term which the Agency had officially used on their leak reporting form as early as a decade earlier. This section also included complaints about the difference between good and bad leaks being that good ones help the administration.

In one section near the end of his speech, the notes indicate that Casey spoke about the Agency’s relationship with the media. Since he had become Director, the Agency no longer briefed the media “as a public service.” Instead, Casey said that they “only do so now when it is in [their] interest to do so.”

The final section of the notes concludes with Casey acknowledging that he was preaching to the choir about leaks and the policies that the Agency wanted to pursue, while indirectly acknowledging why he was doing so. When Casey said that he felt more confident because people like SIGNA’s members were “out there in our major corporations and other facets of the U.S. Government spreading the word.” Casey was reassured that while he used the full weight of the Agency itself, the members of SIGNA would lobby for CIA through their positions in corporations and the rest of the federal government.

Over the following years, the Agency’s relationship with the SIGNA Society continued. In 1983, SIGNA held a cocktail buffet in one of the Agency cafeterias, inviting all current members of the Agency’s Office of Security. This appears to have coincided with their annual convention. 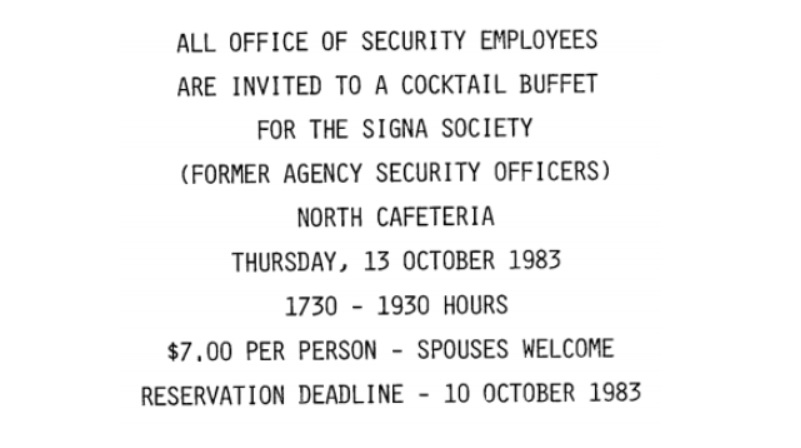 Notes written while preparing remarks for the following year, again by senior Agency personnel, once more singled out leaks and FOIA as topics of discussion and things that needed to be curtailed.

In a 1986 memo regarding the annual SIGNA Society convention, the Agency’s Director of Security (DOS) reveals even more about their ongoing relationship with the members of the group. According to the memo, the SIGNA Society was an informal organization, which may explain why it wasn’t registered with the IRS until 2014. More significantly, the memo states that “the SIGNA Society is very supportive of the Agency and the Office of Security. Its members support the Agency in various ways, sometimes compensated, sometimes not, such as serving as independent contractor investigators; serving as live letter-drop addresses; and providing promising recruitment leads for staff employment.”

By this point, the SIGNA Society’s support for the Agency had been repeated in memos written over a number of years. In this instance, the SIGNA Society itself was directly stated to support the Agency, with contract employment being included in how its members provide that support. The mention of SIGNA Society members “serving as live letter-drop addresses” is especially significant. In the parlance of tradecraft, a live drop is when two individuals meet to exchange a package (as opposed to a dead drop where the item is simply left by one party for another to retrieve later). Using members of the SIGNA Society as live drops provided the Agency with a degree of deniability for trusted channels. Its inclusion, along with the contract employment, in the DOS’ summary of the SIGNA Society also ties to the group to some of the Agency’s ongoing covert activities.

It’s clear that despite SIGNA Society’s charter reportedly asserting that it has “no relationship whatsoever with its former employer,” such a relationship was ongoing for many years. The Central Intelligence Agency could not only count on these retired security officers to be “on-call” and to aid with recruitment or participate in clandestine live drops, but to proselytize CIA’s word with corporations and the rest of the U.S. Government. Despite the briefings having been ostensibly unclassified, only part of one of those briefings has actually been released through the CREST database. It’s almost certain that there’s much more about SIGNA’s history still to be uncovered.

What’s unclear is precisely what the SIGNA Society’s current relationship with the Agency is, though at the time of this writing their website stated that “associate membership” is available for current employees with at least 10 years of service. Full membership requires that individuals meet “an eligibility requirement and have 20 years or more of federal service.” There’s little doubt that this “eligibility requirement” includes service with the Agency’s security office.

Selected correspondence and the SIGNA Society’s second issue of their newsletter, Spectrum, are embedded below. The newsletter includes a number of names and references which readers may want to file FOIA requests about: