Documents released to Alexa O’Brien reveal that back in 2010, in response to the publication of the Iraq War Logs leaked by Chelsea Manning, the U.S. Intelligence Community released their official response to WikiLeaks …

which they warned “represents the magnitude of the potential danger when technology, opportunity, and malevolent human motivation combine.”

That report in turn led to official guidance to Executive Branch agencies from the Obama administration on how to clamp down on “insider threats.” While agencies were allowed their own degree of autonomy towards implementing that guidance, the nearly-uniform agreement was that in order to prevent “spillage” of classified information, the best place to start was to block access to WikiLeaks from agency computers. 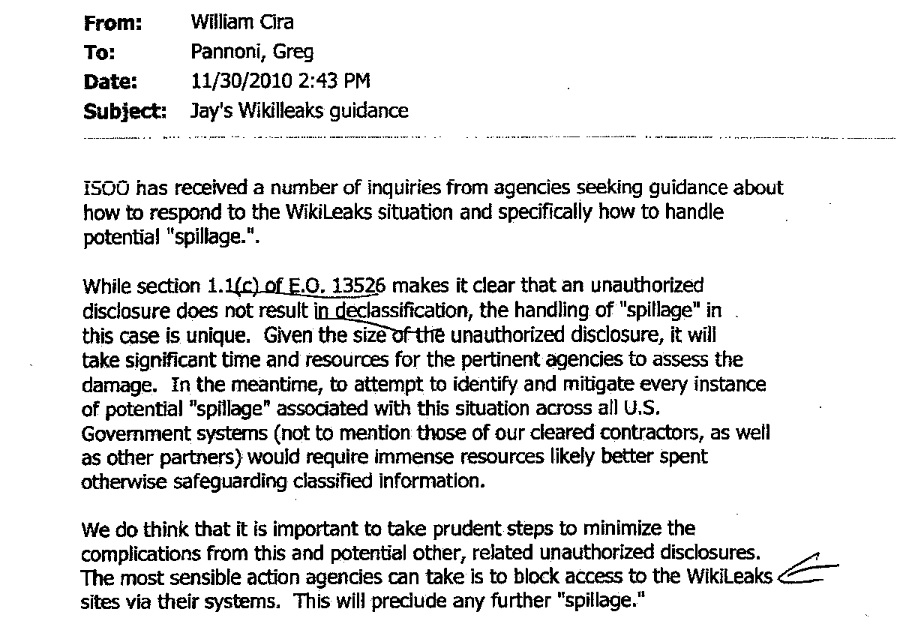 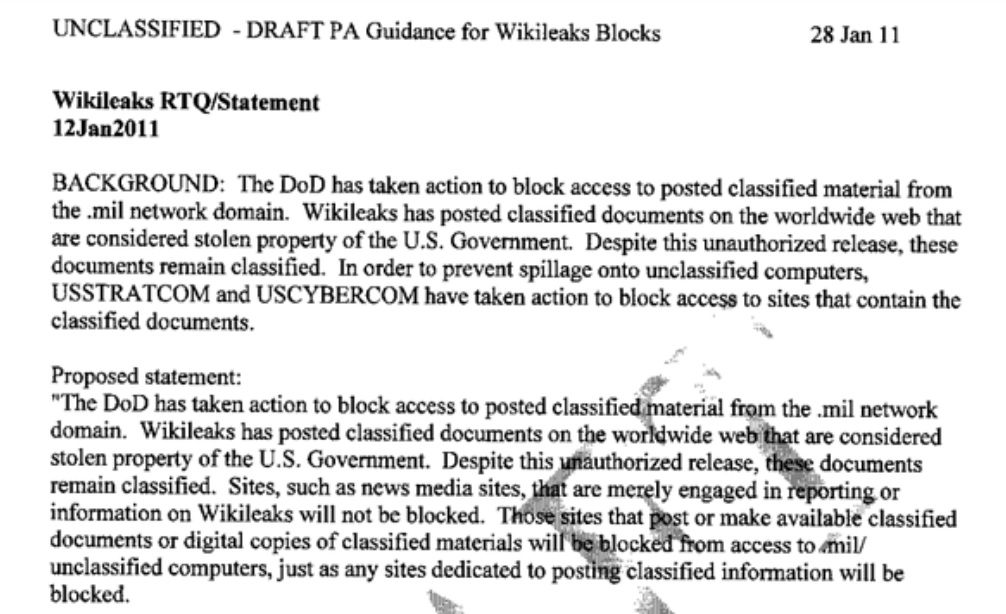 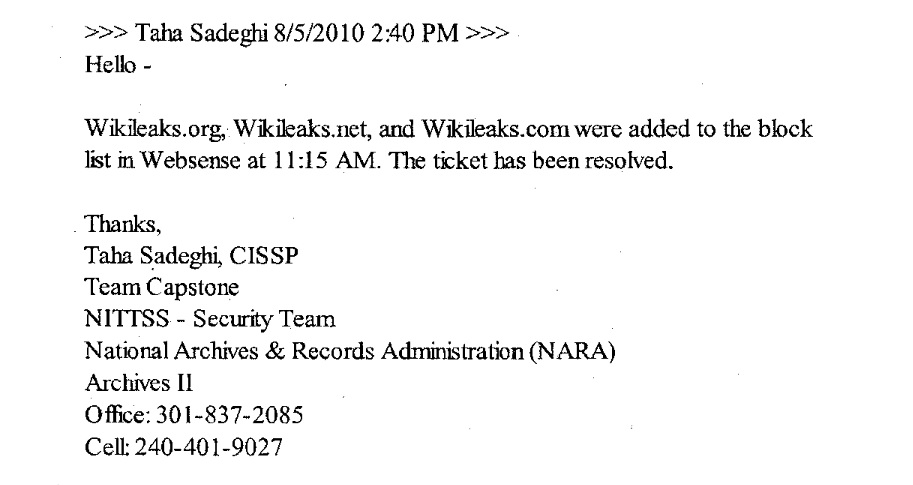 While that (sorta) solved one very specific aspect of leaking, it raised an even bigger one - what to do about that massive amount of classified information that’s not part of the public sphere? As the guidance made clear, public or not, that information was still classified …

and employees were encouraged to come forward if they had accessed it, willingly or not.

Getting past a blocklist on an government workstation is one thing, but what if they accessed that information from the privacy of their own home? Or read about it in the New York Times?

Federal employees were stuck in a state of “Schrodinger’s First Amendment.” While they weren’t, and constitutionally really couldn’t be, barred from visiting WikiLeaks, they ran the risk of breaking federal law by viewing anything that could be “reasonably assumed to be classified.” 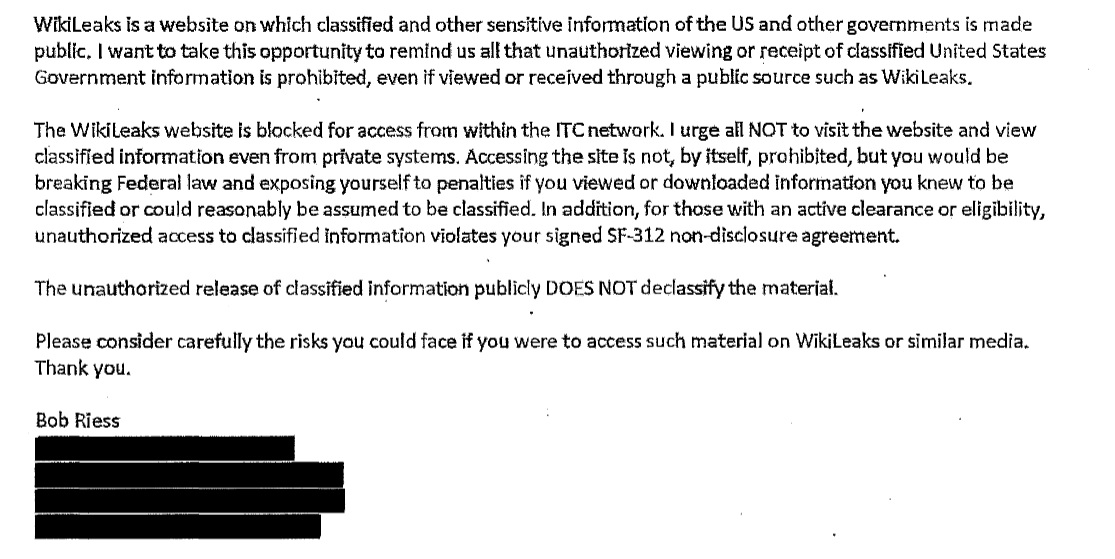 This paradox was put to the test a few years later, when WikiLeaks uploaded thousands of declassified, publicly available State Department cables after having made them text-searchable.

NARA researchers were eager to get access to the trove of material, which led to requests for the site to be whitelisted.

Initially, NARA didn’t have any objection to this, and even drafted a press release stressing that this information had been in the public domain for years.

However, just one day later, after discussion with the State Department, that line was replaced with one stating that they could “neither confirm nor deny” that those cables were authentic, declassified records - leaving the sword of Damocles dangling above the head of inquisitive public servants. 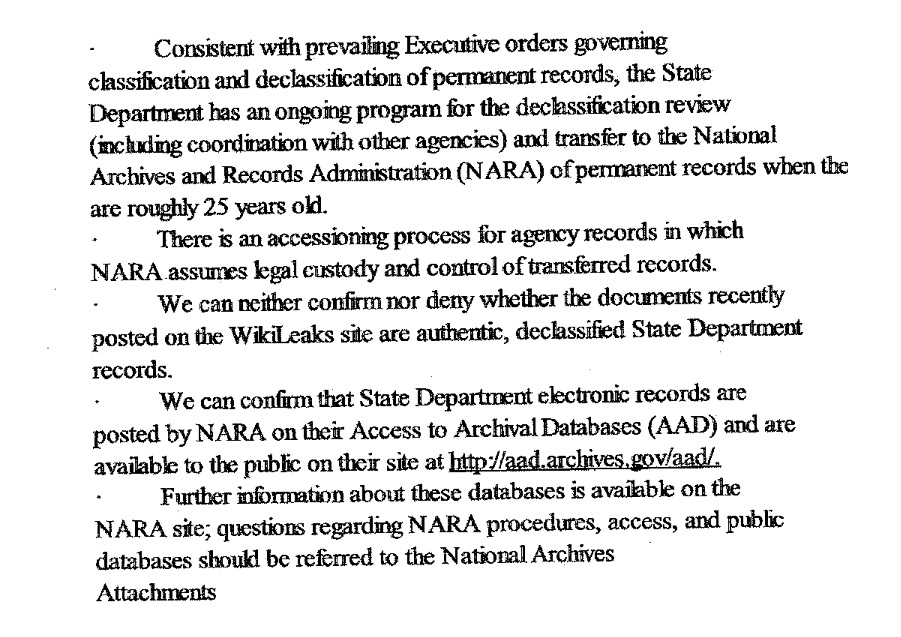 That said, it appears as if the threat of stepping on a classified landmine or two was not enough to deter the Securities and Exchange Commission. In response to a FOIA request for all the WikiLeaks documents, they produced nearly 3,000 pages all downloaded from the site …

noting that, classified or not, they’re publicly-accessible. And now, like it or not, part of the public record.

Read the full intelligence community response to WikiLeaks embedded below, or on the request page. All of O’Brien’s completed WikiLeaks requests can be seen here.

A. O'Brien sent this request to the National Archives and Records Administration of the United States of America

A. O'Brien sent this request to the National Reconnaissance Office of the United States of America

A. O'Brien sent this request to the Securities and Exchange Commission of the United States of America