Exactly one year ago, I sent the Central Intelligence Agency a FOIA request for emails on WikiLeaks. In response, the Agency has repeatedly attempted to stonewall the request, most recently by simply ignoring the matter.

In the face of the CIA’s determination not to fulfill the request, we will be filing a lawsuit against the Agency to compel the release of the files and full fee waiver. While Kel McClanahan of National Security Counselors - who represented MuckRock in the lawsuit which established the precedent making this FOIA possible - has agreed to work on the case and recover his fees from the CIA afterward, we still need to cover the actual costs associated with the request, such as filing fees, travel and other expenses. Here’s how you can help.

The emails, which are expected to span more than a decade, will shine a light on how the Agency reacted to the publication of thousands of secrets, and how the government came to see a journalist non-profit group as a “non-state hostile intelligence service” as well as the CIA’s reactions to WikiLeaks publishing information about the Agency’s hacking tools in the Vault 7 and Vault 8 releases, which the U.S. government has only just recently directly confirmed came from the CIA.

While the Agency will certainly attempt to withhold many of the emails, there is still an incredible amount of information that can be sanitized and released. In its initial reply to the FOIA request and after “consultation with senior members” of the FOIA office, the CIA estimated there were “over 5,000 pages” of emails which they could expect to release. While given in a blatant effort to circumvent a provision in the statute which would require them to automatically waive all fees associated the then-delinquent request, the figure is an indication of the CIA’s interest in WikiLeaks and the scope of its reaction. It will also make it difficult for the Agency to justify to a judge any attempt to release much less than that figure without seeming to act incompetently or in bad faith. 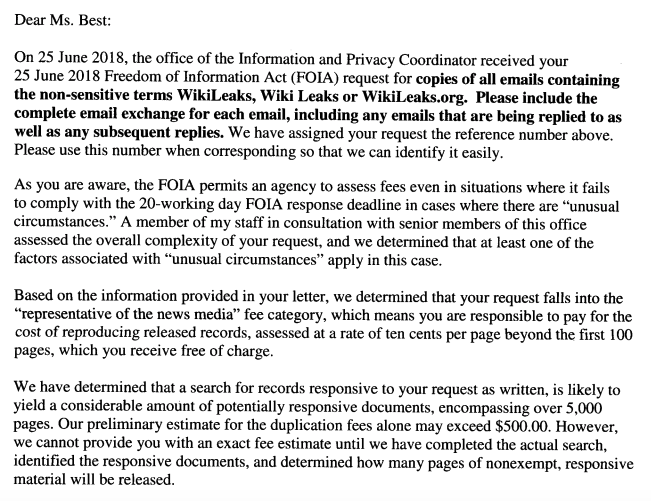 When it was pointed out to the Agency that while they had addressed the automatic fee waiver issue, they had not actually ruled on the fee waiver itself, the CIA sent a second response which strangely conferred a “partial fee waiver” for whatever information they deemed was in the public interest. The letter also declared that there was “a considerable amount” of emails “whose disclosure will not further the public’s understanding of the operations or activities of Government” and therefore “their disclosure is not in the public interest.”

In response, we submitted an appeal arguing that both the facts and case law were inconsistent with the Agency’s findings and behavior, citing statements from CIA leadership, CIA-derived publications and Congressional findings referring variously to Chelsea Manning’s disclosures through WikiLeaks, the organization’s publication of Democratic National Committee and Podesta emails, and its publishing information on CIA hacking tools. The Agency ignored the appeal, as well as four separate attempts to follow-up on it.

To secure the release of these documents, which is all the more important in light of the U.S. government’s alarming decision to charge Julian Assange for WikiLeaks’ publishing Chelsea Manning’s leaks rather than the group’s more objectionable and legally questionable behavior surrounding CIA’s Vault 7. Every document obtained through the lawsuit will be made freely available through MuckRock and DocumentCloud.

You can donate to the crowdfund on the request page or below.