Hawaii has 1,951 untested rape kits, some dating back to the early ’90s. However, a new program seeks to fix that by examining other evidence collection policies across the country.

During a six month period that began in June 2016, representatives from various Hawaiian police departments, sexual assault treatment programs, and prosecuting attorneys met in a working group devised by the attorney general to discuss the sexual assault response protocols currently in place in law enforcement agencies across the islands.

The group created Act 207 SLH 2016, also known as the Malāma Kākou Project, (Care for All of Us; We Care), which examined sexual assault evidence collection policies in other cities across the country and drafted a plan to test and track rape kits, and notify victims about the status of their cases. The full report, drafted in Dec. 2016, was released to us as part of our project on the backlog.

Under this new project, $500,000 was appropriated to the Department of the Attorney General to test 500 rape kits and provide victim services. All kits will be tested, unless they meet one of five criteria: 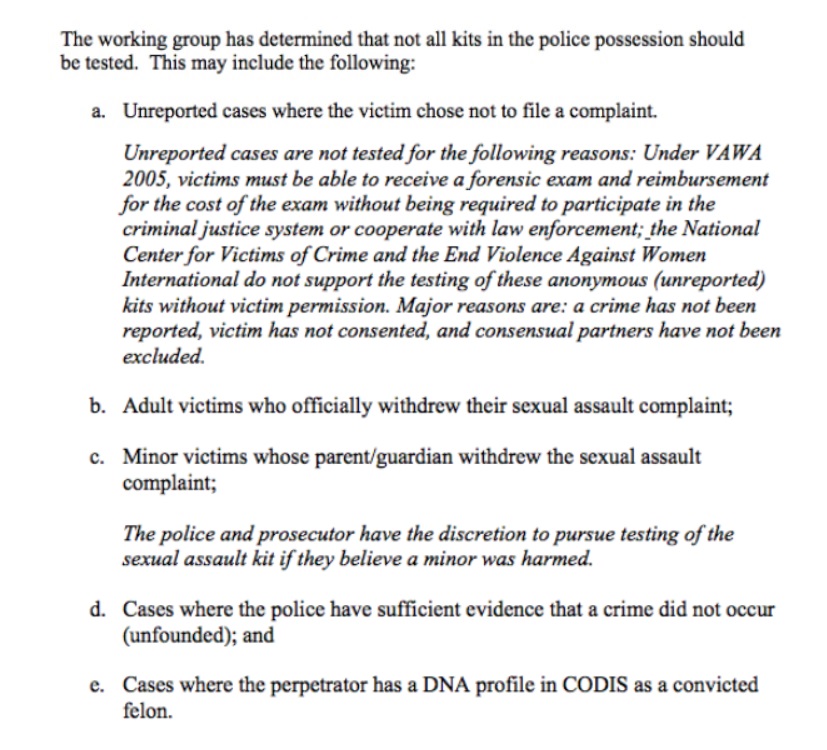 The group also updated their procedures on kit testing priority and victim notification after speaking with survivors and drawing on laws in place elsewhere. In Act 207, Hawaii calls for a “victim-centric” approach, meaning that, above all else, they seek to empower the victim and give them as much control as possible - part of this means allocating crisis support available for immediate use and allowing the victim to decide if they want the case to move forward.

The report also included a section titled “available and potential funding,” which listed grants they were eligible for and estimated the amount they would need annually, based on an average of about $750 per tested rape kit.

The report highlighted problems in other cities and how Hawaii compared, noting the benefits of improvements. They underscored the importance of uploading DNA profiles to CODIS, the nationwide database of criminal DNA profiles, by citing examples elsewhere - in Los Angeles, for example, about 46% of tested kits yielded a DNA match in CODIS, while in New Orleans, 54% of the newly tested kits yielded a match.

By including this data, and fitting Hawaii into a larger framework of sexual assault across the country, Act 207 seeks to add uniformity the the collection, maintenance, and testing of rape kits - which as we reported before, is sorely lacking at the federal level. Only through greater cohesion in how the kits are collected, stored, and processed can we truly reach the goal of testing every kit and strengthening CODIS.

The full report is embedded below:

This piece is part of our ongoing project examining sexual assault evidence collection policies and the rape kit backlog. Follow along on the project page, and help us continue to fund these records requests and reporting by donating below. Add your town to our project via the form below, and we’ll submit a request to your local law enforcement.