Governor of North Dakota Doug Burgum’s office has finally provided us with records about how they went about cleaning up the Oceti Sakowin protest camps at Standing Rock. Due to the dismantling being conducted by private contractors, there isn’t much in terms of concrete actions, but we did receive some intriguing memoranda coming out of the Governor’s office.

The collection of documents released to us illustrate how fraught the relationship is between the Standing Rock Sioux Tribe and North Dakota, with multiple references to the camp being “an ecological disaster waiting to happen.” Claims that the camp was going to pollute the Cannonball River were issued by Burgum himself, and members of his staff. 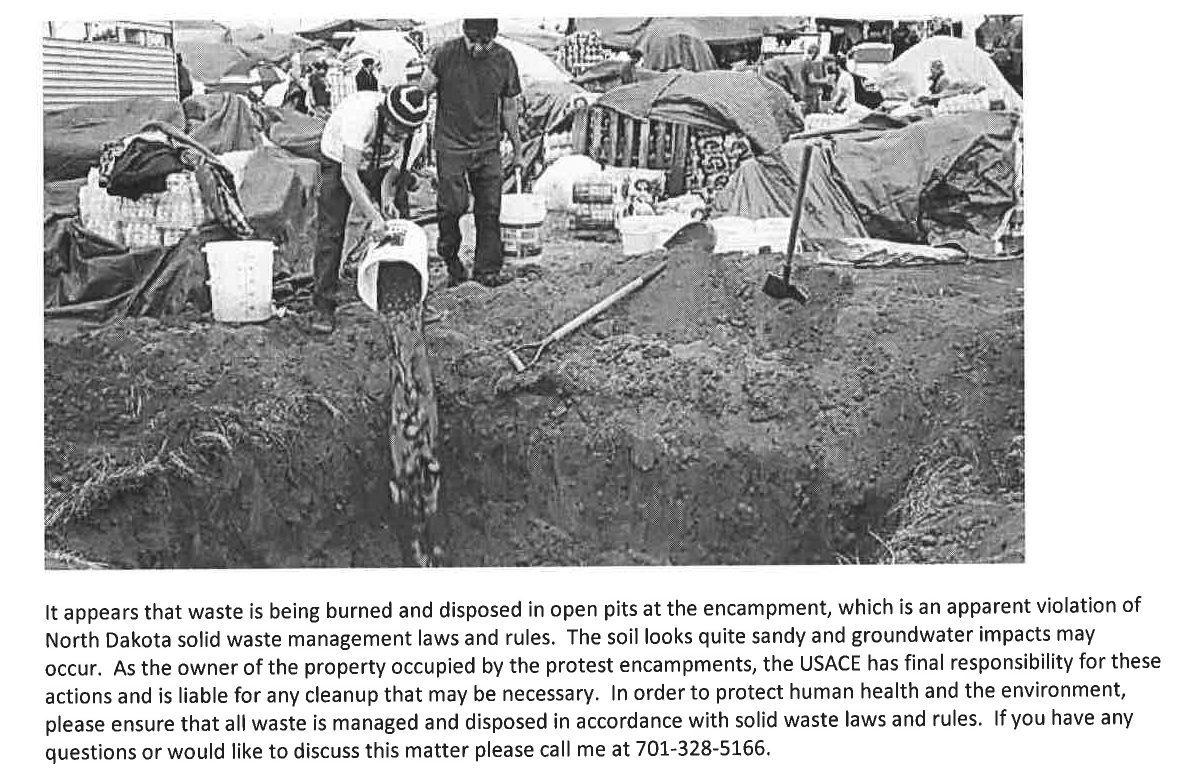 Being that the very purpose of the camp was to stop construction of a pipeline which could potentially devastate Lake Oahe, a crucial fishing, hunting, and water source for the tribe, this begs the question: which is more deadly for a river, some trash and food waste, or thousands of barrels of spilled crude?

The environment aspect was echoed again in a letter Governor Burgum sent to the state Senators and Representatives about a week after the clean up,

Highly complimentary of how law enforcement dealt with the protest, it isn’t until halfway in that Burgum begins to get controversial.

The accountability Burgum is referring to here is in reference to federal funding supposedly on the way to rescue North Dakota after the state took on multiple loans of millions of dollars each. North Dakota has already been waiting months for federal reimbursement, with no clear payout in sight.

Burgum then begins to speculate about the future of protests …

and his own take on how his state handled #NoDAPL as a whole.

Those who were subject to water cannons in hypothermia conditions, mass arrests with felony riot charges, tear gas, or rubber bullets might have something to say about Governor Burgum’s assertion.

As would the National Lawyers Guild group who filed a class-action lawsuit against Morton County Sheriff, who Burgum singled out for their work, for use of excessive force.

While Burgum ends with an appeal for healing and renewed trust …

the sentiment doesn’t seem to jibe with the actions of the North Dakota government in response to the NoDAPL movement. While the situation may be over, the consequences that will be felt by those living in the Standing Rock Reservation, and those who disagree with him regarding his views on what water protection really looks like, have yet to be seen.

That, and in order for the fresh start Burgum wants, having his Communications Officer ask the Army Corps of Engineers-Omaha District Public Affairs Officer to drum up “fairly vanilla and general” talking points in the event the Governor got asked by the press about the Corps’ involvement with the clean up, probably isn’t the best first step.

Also of note here, is how Captain Ryan Hignight mentions how the Corps’ hands are “tied pretty tightly” due to the new Trump administration. It seems Governor Burgum isn’t the only one worried about public relations surrounding Standing Rock.

Read the full letter embedded below, or on the request page.