As much as journalists hate to admit it, FOIA is not really for them. FOIA is for the public, ensuring that voters have meaningful oversight of work done in their name. Giving a blanket exemption to emails, Slack chats, and other “conversational” communication tools would disastrously break that oversight — and undermine the ongoing American experiment of an informed democracy.

The relevant laws were written decades ago, in an era when the dichotomy between written words (memos and letters) and spoken words (phone calls and meetings) was much starker than it is today. And because they are written down, emails are treated like formal memos rather than like informal conversations. […] Treating email as public by default rather than private like phone calls does not serve the public interest. Rather than public servants communicating with the best tool available for communication purposes, they’re communicating with an arbitrary legal distinction in mind.

Unfortunately, Yglesias has a lot of misconceptions about how FOIA works, as folks who live and breathe FOIA widely noted.

.@voxdotcom got this dead wrong. Among other things,not 1 mention of existing #FOIA exemptions that protect privacy and deliberative procoss— Lauren Harper (@LaurenLeHarper) September 6, 2016

Yes, mention FOIA to a government employee, and there’s a better than even chance that they’ll roll their eyes. It’s a pain, but it’s not carte blanche to access everything an official sends.

But beyond these and a number of other inaccuracies, Yglesias is wrong about why emails should be subject to FOIA for two critical reasons:

The first aspect is pretty straight forward: When reporters and the public can request emails, it makes it easier for meaningful accountability to happen.

Under current law, if Bill Clinton wants to ask his wife to do something wildly inappropriate as a favor to one of his Clinton Foundation donors, all he has to do is ask her in person. […] Information is disclosed on request to the requesting parties — which has turned it into a very slow, highly adversarial process that’s primarily useful to people with an ax to grind.

It’s true that there are an almost infinite number of workarounds to public records law that officials can use. But it’s also true that time and again, requests for officials emails have turned up important information that led to reforms.

Just a few of these stories based on FOIA’d emails:

This is just a tiny sample of the accountability reporting that happens because emails specifically are subject to FOIA, and the non-partisan results (Have another story we should include? Email or tweet me).

If you read any accountability journalism, it’s amazing how often emails received through public records requests and the Freedom of Information Act provide a pivotal role. If anything, stories based on public records stories tend to be the antidote to the “hot take” culture that Yglesias worries is corrupting good government.

As a bonus, even government phone calls are often recorded and provide important accountability measures. One great example, via the Associated Press’ Ted Bridis: How a No Fly Zone over Ferguson — originally stated as a public safety measure — was actually created to keep the media away.

Making emails and other modern communication channels exempt from FOIA means that most of these stories would be impossible, or much weaker. Instead, reporters would have to rely on citing “according to sources,” which leaves their reporting vulnerable to he said, she said back and forth that inevitably dulls its impact.

The other half of Yglesias’ argument, that too much oversight impairs government work, also misses the mark.

He’s absolutely right that government employees require the ability to brainstorm and speak candidly. This is what B(5), phone calls, and in-person meetings let them do. But it’s equally important that government officials do get used to working in public, so to speak, and part of that job is being able and ready to share, explain, and occasionally defend their work.

The more routine they make that practice, and the more deeply ingrained it is in their culture, the harder it is for anyone to turn it into a “gotcha.”

As one case study, take a look at how Jeb Bush handled requests for emails during his tenure as governor of Florida. It was not well handled: The emails included social security numbers and other private information, which later had to be pulled offline, redacted, and then re-released.

But dumping email early and often generally worked out for him: Dubbed “the email” governor, he addressed potential scandals that surfaced in his emails and moved on, as did voters. For all its faults, his campaign was never dogged by even his more controversial missives.

And that culture of disclosure is deeply ingrained in Florida. I spoke with an official there several years ago, who said that most organization charts in the state put the people up top:

Perhaps its a small, symbolic move, but it helps serves as a reminder: When you work in government, the people are your boss. And the boss has a right to see your work.

“Outside of the specific context of American politics, nobody thinks these messages should be treated socially or legally as the equivalent of official memos rather than phone calls or oral conversations,”

Which is odd, since this routinely happens in private businesses when companies do internal reviews to address issues ranging from sexual harassment to fraud. The SEC, in fact, has incredibly strict guidance regarding how internal messages — regardless of medium — need to be retained for all public companies.

Over the course of helping our users file almost 25,000 requests, almost all of the officials I’ve had the pleasure to work with agree on this point, but agency culture of transparency varies widely — not because some are malicious or take their job less seriously, but because when you’re not used to oversight, it can be extremely uncomfortable. But when you sign up for working in government, it is also essential that it comes with the job.

Some agencies act as if they were the custodians of government records on behalf of the public — these agencies invariably seem to work with requesters on ways to make more public, and generally have stronger relations with the press and more trust with voters. Other agencies treat requests more grudgingly, and it has a ripple effect up. If you fight over whether trivial information is released, it’s hard to trust you with more important information.

18F has done a great job of working to embrace openness as a core value, doing much of its programming work in public on Github, and even working to open up much of its Slack services to the public. 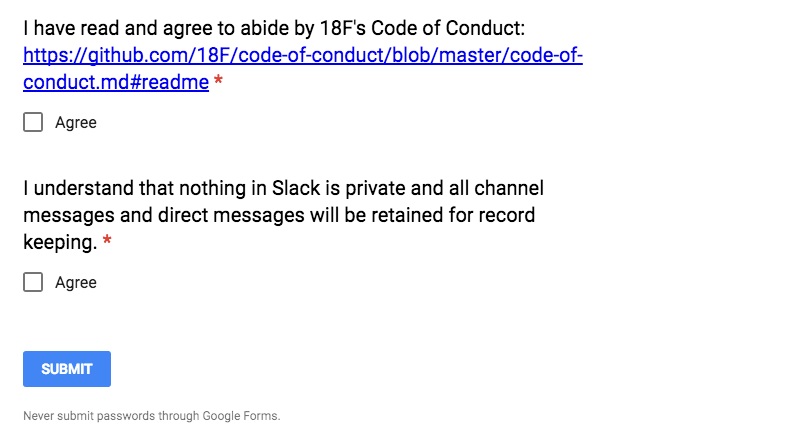 That strategy has seemed to work: 18F has achieved a lot, and what scandals have emerged have been taken in stride, with the agency preferring open and honest communication around the challenges as they move to update the technological engines of governance for the digital age.

Another of my favorite examples is the City of Fort Collins, which has proactively released every city council email not specially marked private for the past two years.

Anyone can log in and search email at will, and it’s worked well enough that the council has kept up the practice (try it yourself here).

What typically hurts officials is when they fight requests, rather than embracing them as an opportunity to share their work with constituents.

Request for Communications with St. Louis County or Ferguson Police