Two months ago, we kicked off FOIA March Madness with 64 federal agencies. After a brutal opening round, and grueling semis, we’re down to this - the Final Four.

So, without further ado, let’s see the results. 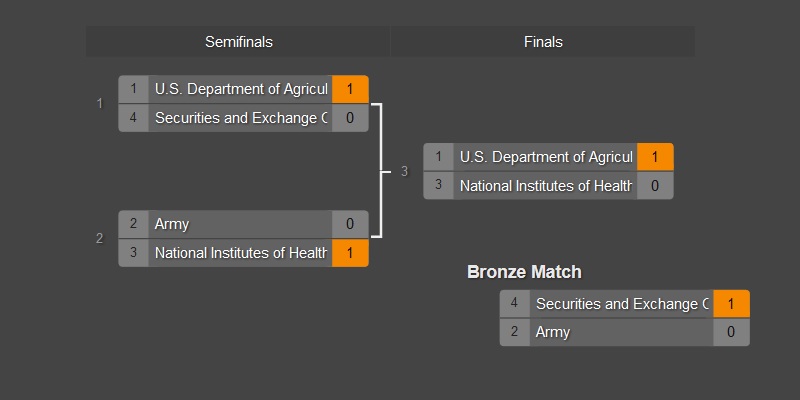 Phew. Take a second, and then let’s break it down -

Representing Workers’ Comp(etition), a very strong SEC was favored to at least take Silver, but had the misfortune of being paired off against the powerhouse USDA in the opening round. However, we want to make a special shout-out to FOIA officer Dave Henshall, who is the only officer who’s gone out of his way to apologize to Beryl for using the wrong salutation.

Dave, you are the real MVFO (Most Valuable FOIA Officer).

Representing the wildcard (Common) Good Sports, NIH overcame a slow start to provide one of the widest range of releases, including additional links to online resources.

Representing Admin It to Win It - which saw the highest level of competition in the tournament - the USDA just dominated the Finals, with not only the most pages released and widest range of documents (including additional links), but also the special distinction of being the only agency to release documents that were drafted after the initial request. That is next level right there.

We’d like to thank all the participating agencies (at least, all the ones that actually acknowledged our request) and to everyone who submitted their picks back in March - especially FearNoArt, winner of the 25 request grand-prize.

Check back in on Friday for post-game analysis by the MuckRock staff.

FOIA Regulations and Guidelines for Requesters and Officers (Department of Agriculture)

Beryl Lipton sent this request to the U.S. Department Of Agriculture, Office of the Secretary of the United States of America