A breach-of-contract squabble has spiraled into broader allegations of misconduct against a drone manufacturer with millions in US military contracts. A motion filed last week in Florida civil court claims that Prioria Robotics misrepresented specs for its flagship “microdrone”, and also sold refurbished units to the Army as if they were new.

Gainsville-based Prioria Robotics manufactures the Maveric “microdrone”, which weighs less than 3 pounds, has a 30 inch wingspan, and boasts a camouflaged, “bird-like” profile. The Maveric can be hand-launched from its storage tube without any assembly.

Prioria markets its Maveric drone for military, surveillance, and public safety applications. In 2014, the Defense Logistics Agency paid $240,000 per Maveric system. The company has won contracts with the Army, the Navy, the Air Force, and NASA, among other federal agencies, for drones and accompanying gear.

Prioria is one of several manufacturers whose drones have been assessed via the Robotic Aircraft for Public Safety, an evaluation program run by the Department of Homeland Security. It’s unclear how the Maveric fared in RAPS evaluations, however, since federal clerks refuse to release the results.

Florida Governor Rick Scott toured toured Prioria’s 22,000-square-foot facility in 2012, and appointed the company’s CEO to serve on a state board in 2015.

“It’s a pleasure to look in on Prioria’s progress because it’s a preview of a promising future for business in Florida,” Scott said during the 2012 tour of Prioria headquarters.

But a former Maveric vendor alleges that Prioria’s customers may not have gotten what they paid for. In a submission that includes sworn statements from former Prioria employees and consultants, Condor Aerial asserts that the Maveric drone is “stale technology” with critical design flaws, and that Prioria knowingly misrepresented its product to pad the bottom line.

Prioria has not responded to these fundamental allegations about its business practices.

In March 2013, Prioria signed a contract that made Condor a licensed retailer of the Maveric unmanned aerial system. Per Condor’s court filing, the idea was for Prioria to service the military market, while Condor would purchase Maveric drones at wholesale price for resale to domestic law enforcement.

But Condor says that Prioria duped them by fudging the specs for Maveric drones, and that the company is selling a hobby-grade drone at a military-grade price.

The Maveric, Condor claims, “in some aspects, used technology and had capabilities similar to [unmanned aerial vehicles] that could have been purchased in hobby industry channels or on Amazon.com. In fact, some hobby fixed wing foam platforms offered greater flight time with higher resolution cameras for under $5000 that equaled or even exceeded those of the [Maveric] system.”

Prioria has not responded to inquiries about the technical details of its Maveric drone.

To support such claims, Condor submitted a sworn statement from a former Prioria sales manager, who worked next to CEO Bryan da Frota.

“I had the desk immediately adjoining Mr. Da Frota’s desk and was approximately 2 feet from him for the majority of the work day,” wrote Patrick Seidel in a signed statement from October 2015. 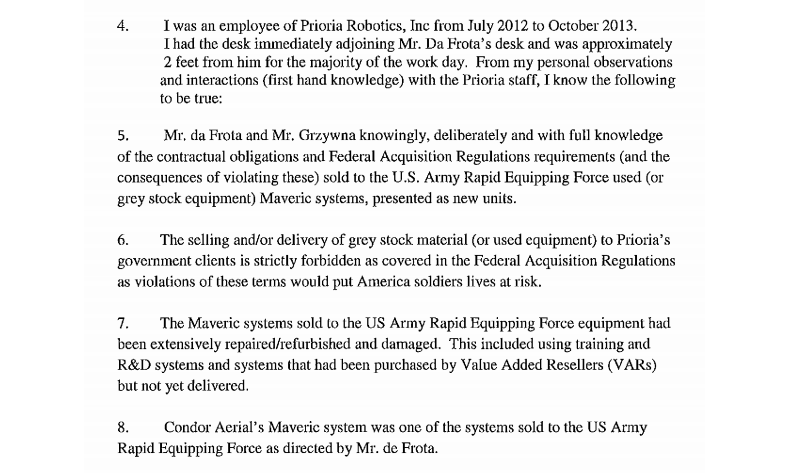 Seidel attests that the Prioria CEO “knowingly, deliberately and purposely falsely represented the technology” to Condor, as well as to customers in the federal government. Seidel points to flight duration and landing methods as key misrepresentations.

“The Maveric was not capable of exceeding one hour flight duration in any configuration other than the most basic […] camera system — this was routinely and knowingly misrepresented with the intent of exhibiting capability that was not achievable without major change/redesign,” wrote Seidel.

Seidel also indicates that Prioria’s drone “would routinely suffer structural damage” as well as damage to its cameras when landed on hard surfaces other than turf or long grass.

“These known design flaws were purposely omitted in discussions with federal and external organizations,” Seidel stated.

A former consultant for Prioria, Randy Henson, also submitted a sworn statement that was included with Condor’s court filing. According to Henson, one Defense Department command shelved the Maveric “as unusable in the field.”

Henson states that he helped Prioria secure a $3.6 million contract with AFRICOM, which oversees U.S. military operations in Africa, in August 2013. But after the contract was signed, Henson says, AFRICOM received drones with substandard equipment that was very different from demonstration units. 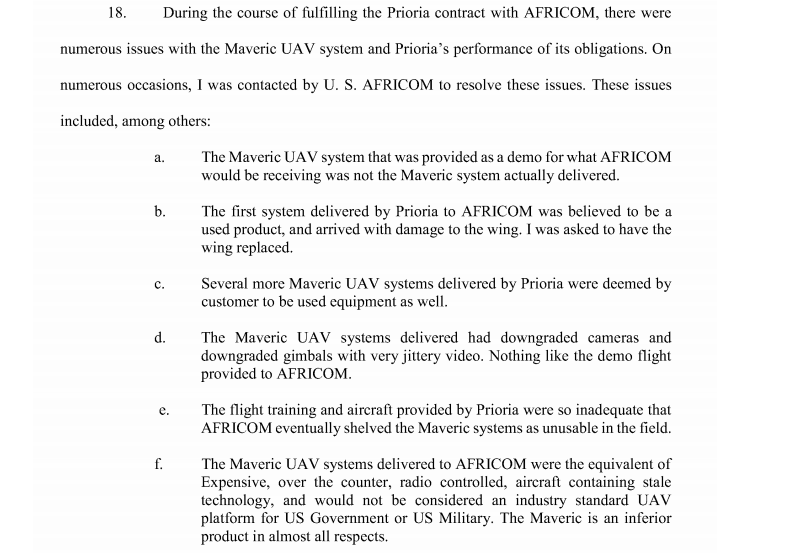 “The Maveric is an inferior product in almost all respects,” Henson summarized.

Beyond product quality issues, both Seidel and Henson claim that Prioria sold “grey stock” — used or refurbished items — as if they were new product.

Seidel says that one such “grey stock” Maveric system that Prioria sold to the Army was originally purchased by Condor. This is the material dispute between Condor and Prioria.

In February 2013, Condor ordered two Maveric systems from Prioria, one for demonstrations and the other for resale, according to Condor’s filing. As months passed without delivery, Condor indicates that it had to reschedule demonstrations for a number of customers, including the FBI, the CIA, NASA and 12 local law enforcement agencies.

When Prioria finally shipped the drone to Condor in October 2013, it arrived with critical camera defects. Prioria asked for the entire package to be returned, rather than just the removable camera, Condor says. Condor alleges that Prioria refurbished this system and then sold it to the Army.

In June of this year, Condor sent Prioria a letter demanding $186,000, triple damages for the drone that it claims was supposed to be delivered two years ago.

A month later, Prioria filed a one-page lawsuit against Condor, claiming that Condor instead owed more than $90,000 for a Maveric system sold in November 2013.

Prioria did not provide the court with documentation of this sale, nor did they answer our requests for such documentation. In its motion to dismiss Prioria’s suit, Condor cited this lack of documentation. Condor then filed its own countersuit against Prioria for triple repayment, as well as damages from alleged deceptive trade practices.

Condor further accuses Prioria of “using Condor as a stalking horse” to identify new clients with the intent to cut Condor out of deals.

Together, the allegations amount to a “pattern of misconduct,” Condor says.

“The modus operandi of Prioria appears to be to make promises it does not intend to keep or without regard to its own performance as well as the performance of its Systems. [....] In addition to Prioria’s misconduct towards Condor, these patterns extend from the United States Military, to Prioria’s own contractors and agents,” their filing reads.

Prioria has yet to respond to Condor’s filing, nor to numerous inquiries.

Image by Prioria Robotics via PBS.org