In the wake of recent events in Ferguson and New York, there have been more and more public calls for police to start using body cameras while on duty, the hope being that these devices will reduce the number of police brutality cases against civilians while protecting officers who are genuinely acting appropriately.

At the same time, body cams raise significant privacy issues, and exceptional use of domestic surveillance necessitates strong policy guidelines to keep those with access to recordings in check. Having recently received of a copy of the Sonoma County Sheriff’s Office body cam manual, released in response to a request by MuckRock user Evan Livingstone, we decided to take a close look at the policies of wine country, and see what they might bode for the future of law enforcement nationwide.

When should they be activated?

One of the main concerns raised by a 2013 ACLU position paper on the use of police body cameras is the responsibility for activating the camera. If the cameras are always recording, members of the public will inevitably have their private moments recorded. On the other hand, giving police officers the discretion to turn their body cameras on and off is even more problematic.

The Sonoma County Sheriff’s Office policy does relatively well in light of these conflicting issues but falls short of giving the policy teeth.

If followed, this policy would represent a fair line down the middle between the two above issues. However, the Sonoma policy does not outline punishments for a failure to activate a deputy’s body camera in an appropriate situation. Further, the Sonoma policy reads, “At no time should a Deputy jeopardize their safety in order to activate a recorder.” This sounds quite reasonable at face value, but it gives deputies a convenient way out of responsibility, i.e. “I felt threatened by the plaintiff and so I chose not to risk activating my camera.”

What should be recorded?

Another important issue is privacy. California is not a single-party consent state, meaning that all parties generally must consent to being recorded, but there is an exception for police work. The policy interprets this to mean that deputies may surreptitiously record any contact made during the performance of their duties if they reasonably believe that the recording will benefit law enforcement, investigation, prosecution or liability purposes.

This is about as reasonable a policy as could be expected. Considering that police body cameras are worn on the lapel, “surreptitiously” can probably be safely interpreted as “without express consent” as opposed to “secretly.”

That said, it does not limit the use of body cameras to uniformed members of the sheriff’s office, but rather reads, “Any member assigned to a non-uniformed position may carry an approved PVR at any time the member believes that such a device may be useful.” Ideally, only uniformed law enforcement officers and marked vehicles - with the exception of the planned use of force - would make use of body cameras so that the public knows what to expect.

Finally, the sensitive nature of police body camera recordings means that it is important to come up with a policy that protects the rights of recorded individuals while preventing a mass of surveillance information from accumulating in the hands of a few individuals. Again, the Sonoma policy does a fairly good job of this while falling short of ideal. 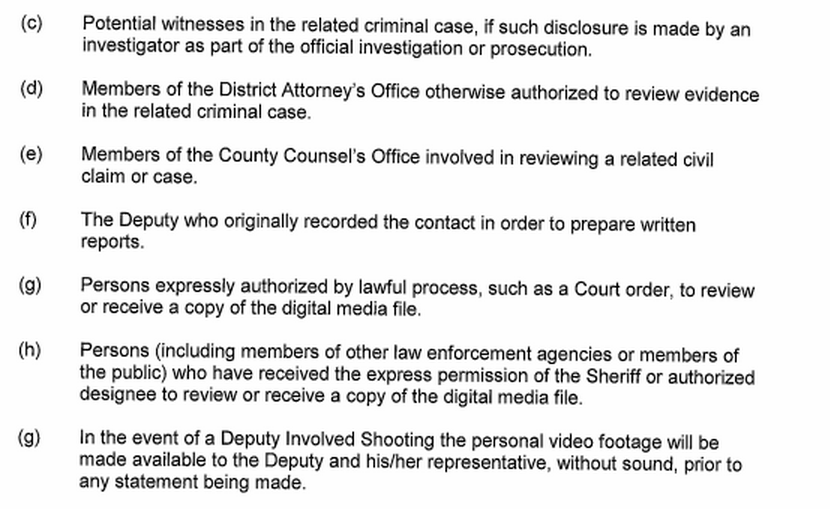 The Sonoma County Sheriff’s Office also appears to have established a reasonable deletion schedule – one year for non-criminal related recordings and a minimum of three years for criminal related recordings. Access to recordings is restricted, meaning that privacy concerns are diminished, but there is no route to public access included. The Sheriff’s Office leaves room for investigating civilian complaints but precious little for “disinfecting sunlight.”

Sheriffs’ offices and police departments across the country that are adopting the use of body cameras all undoubtedly have their own version of this policy, and many may be very different from Sonoma’s. Contact us at info@muckrock.com if you’d be interested in working with us to get a copy of your local law enforcement’s policy, and read through the full doc on the request page, or embedded below:

Image by Throwawaysixtynine via Wikimedia Commons and licensed under the Creative Commons Attribution 4.0 International

Shifting from Tasers to AI, Axon wants to use terabytes of data to automate police records and redactions